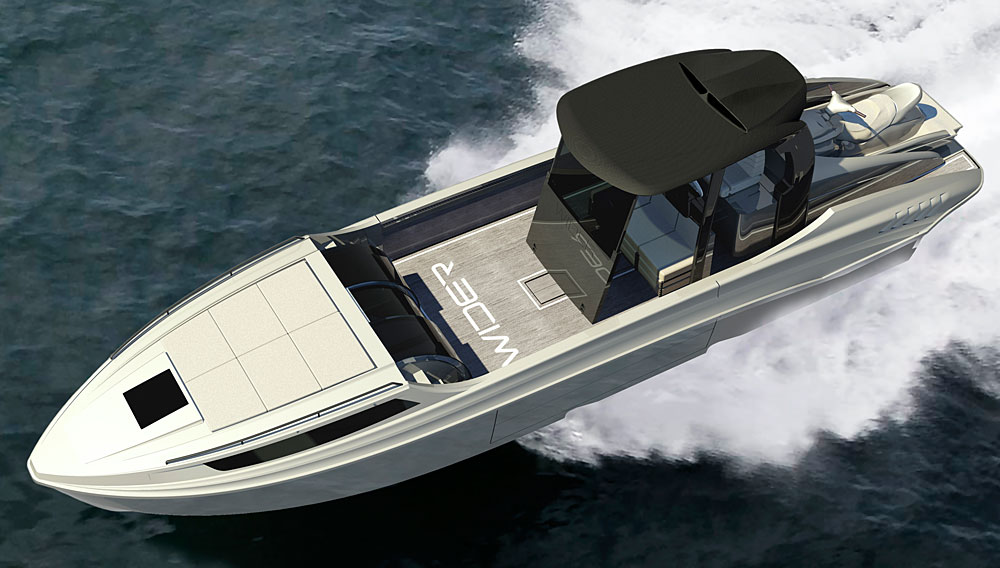 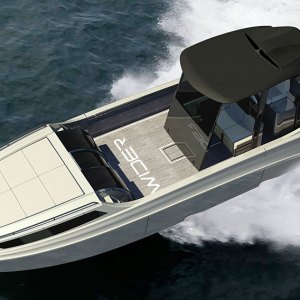 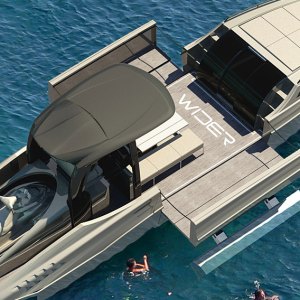 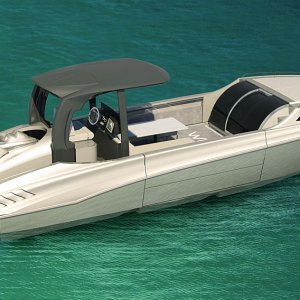 The Wider 42 is a new style of yacht for those who not only love to be on the water, but in it as well. The 42 is the first in a trio of Wider models that will create a fresh category of yachts, transforming themselves from slender, go-fast boats into wide-beamed platforms for snorkelers, scuba divers, and sunbathers.

In motion, the 42 looks like a futuristic performance yacht, with a cabin in the bow area and a Jet Ski positioned in its own cradle at the stern. This unusual profile might be a bit jarring to traditionalists, but the big surprises come when the Wider is at anchor. The yacht transforms into a vessel that is straight out of a science-fiction movie. With the push of a button on the helm, two large side sections of the hull or extensions as Wider calls them, fold hydraulically outward, opening up the cockpit and creating a much wider platform. Hence, the name.

Wider, which will launch similar models in 35- and 50-foot lengths, is the brainchild of Tilli Antonelli, who founded Pershing Yachts in the early 1980s. The Italian brand became the king of the performance-yacht segment. When Antonelli left last year, he decided to try a completely new style of yacht, one that mingled speed with access to the water. The Wider 42’s 162-square-foot cockpit is virtually unheard of for a boat this size. So is the 20-foot beam the full-extension configuration creates.

While the 42 will reach speeds of 45 knots with its 370-horsepower engines, it is also extremely lightweight and aerodynamic. Its engines are installed like some race boats—rather than side by side, but staggered forward and back. That gives it a stronger center of gravity for maximum balance. The stepped hull, also found on many race boats, adds another layer of efficiency to the 42’s performance. Mark Wilson, whose hulls have won multiple world championships, designed the right go-fast running surface for a recreational boat.

But helped by yacht designer Fulvio de Simoni  drawings, Tilli Antonelli also maximized deck space not only by widening the hull, but also by making sure major components are versatile. The puzzle-like pieces in front of the helm station, for instance, can be arranged into two chaise longues, a lunch table, or single sun deck. The ramp for the Jet Ski (which lowers into the water) can also be converted into a sun pad for sunbathers. The boat’s smart interior, with its kitchenette, seating (that transforms into a large berth), head and separate shower, also makes a nice shelter by day or a weekend sleeping quarters.

The Wider 42 is a new class of yacht, one that allows owners to get somewhere beautiful quickly—a cove in the Bahamas or Catalina Island—and enjoy total immersion in the surrounding waters. (011.39.721.956.077, www.wider-y.it)