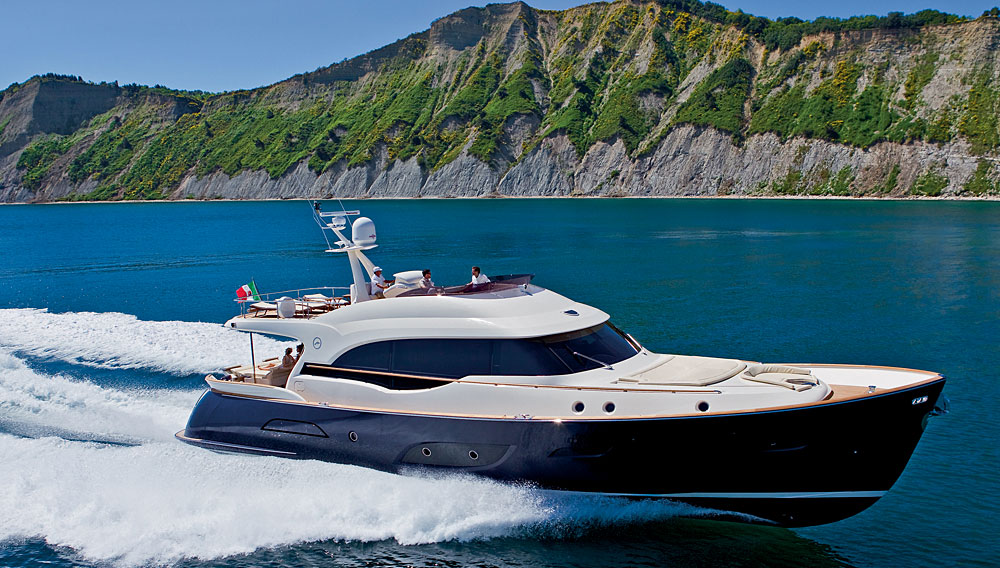 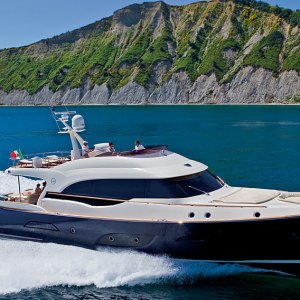 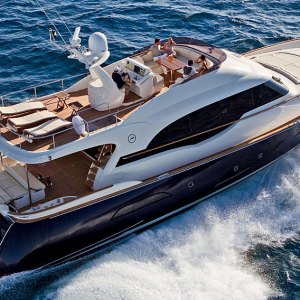 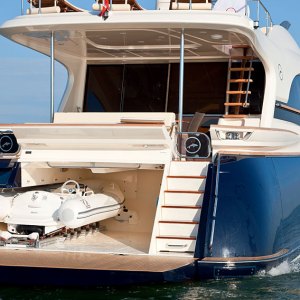 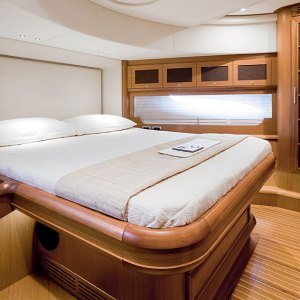 Actually, the 74 carries on where earlier Mochi Craft models—a 44-, 54-, and 64-foot—leave off. The blue-hulled 74 has a similar profile to the other Mochi Craft models, with the upturned bow and fast, sleek hull (top speed is 31.5 knots), but its length allows for unique features like an immense 270-square-foot fly bridge, separate lounge and dining areas, and extended crew’s quarters.

The interior is a combination of light, airy spaces, impeccable joinery, and light-colored furniture. The 215-square-foot salon is divided between a dining area, social area, and separate galley—a plus for entertaining and allowing the crew to move about without disturbing the owners and guests.

On the deck below, the master suite measures 220 square feet, a veritable full-beam palace with large opening windows for access to ocean air. The suite’s mini salon is furnished with two chairs and a dining table for morning coffee, and the large en-suite head is divided into separate areas for owner privacy.  Three guest cabins, each with en-suite heads, are forward. The VIP cabin in the bow is also unusually large for a boat this size, with large side windows.  Even the crew benefits from the thoughtful layout of this new Mochi Craft. The aft space is split into five separate areas, including a dinette, laundry room, and two staterooms for captain and crew. It’s a design from a much larger yacht.

Though it’s based on the traditional American lobster boat, Mochi Craft didn’t spare the high-tech components that add to cruising comfort. An integrated navigation system, high-definition radar, Gi8 monitoring system with touch-screen display, and an optional Anti-rolling Gyro (ARG) system all transform this retro design into a boat of the future. (www.mochicraft-yacht.com)