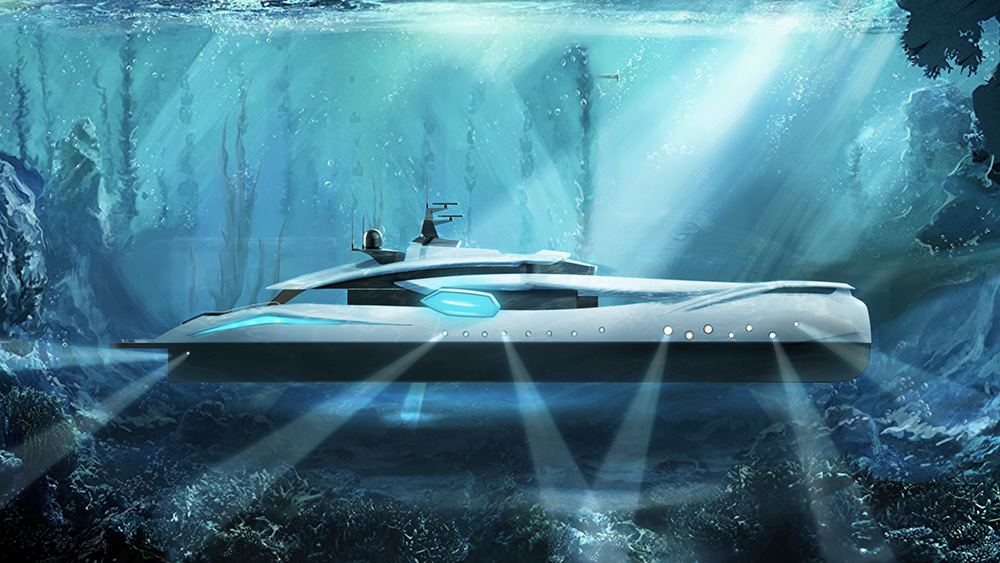 Superyacht designers get their inspiration from a plethora of places. Classic wooden boats, aircraft, submarines, occasionally wedding cakes. But, seriously, a cuttlefish?

Avant-garde Italian designer Roberto Curtò, has just unveiled a jaw-dropping new concept for a 207-foot superyacht, with its dramatic lines inspired by the bug-eyed mollusk, part of the squid family. In fact, to reflect the squid connection, he’s somewhat unflatteringly named his quirky new creation Hypnosquid.

“As always, we don’t just design conventional yachts,” says Curtò, who opened his Rapallo, Italy, studio in 2004. “Instead, we take inspiration from ideas which surprise us, or which transmit emotions.”

He loses us a little when he claims he picked the bottom-feeder for its “elegance, speed and agility.” Cuttlefish may be many things, but ‘elegant’ doesn’t immediately come to mind.

As for the cuttlefish design cues found in Curtò’s Hypnosquid, he points to the opening at the top of the yacht’s bluff-nosed bow that’s reminiscent of a cuttlefish’s head. That, and the dramatic, brightly colored LED-ringed windows dotted along the hull, said to resemble a cuttlefish’s color-changing eyes.

The opening at the top of the yacht’s bluff-nosed bow is reminiscent of a cuttlefish’s head.  Photo: Courtesy of RC Design

While you’ll either love or hate Hypnosquid’s polarizing exterior design, the superyacht’s interior will have you nodding in approval at its creativity.

Interestingly Curtò bases his accommodations around a party of 10, rather than the more typical 12 for a yacht of this size. This, he says, is to allow even more spacious cabins, especially for the owner who gets a stunning two-deck duplex suite. From the suite’s bedroom on the main deck, there’s a grand staircase that leads down to the owner’s private lounge and library.

Hypnosquid’s main level also features a full-beam lounge with an adjoining dining room that’s open to the galley, Japanese-steakhouse-style. This allows guests to watch the yacht’s onboard Gordon Ramsey in action.

As for the yacht’s construction, Curtò envisions the Hypnosquid being built from lightweight aluminum, rather than steel, to keep gross tonnage at around 1,000 tons. Power would come from a quartet of honking 2,600 hp MTU 16V 2000 M96L diesels—that’s a total of 10,400 hp—to give a top speed of 30 knots, and a 3,000 nm Med-to-Caribbean transatlantic range.

Right now Curtò is working with broker SuperYachtsMonaco to find a visionary client willing to invest an estimated $70 million to $80 million in making the designer’s cephalopod dream a reality.