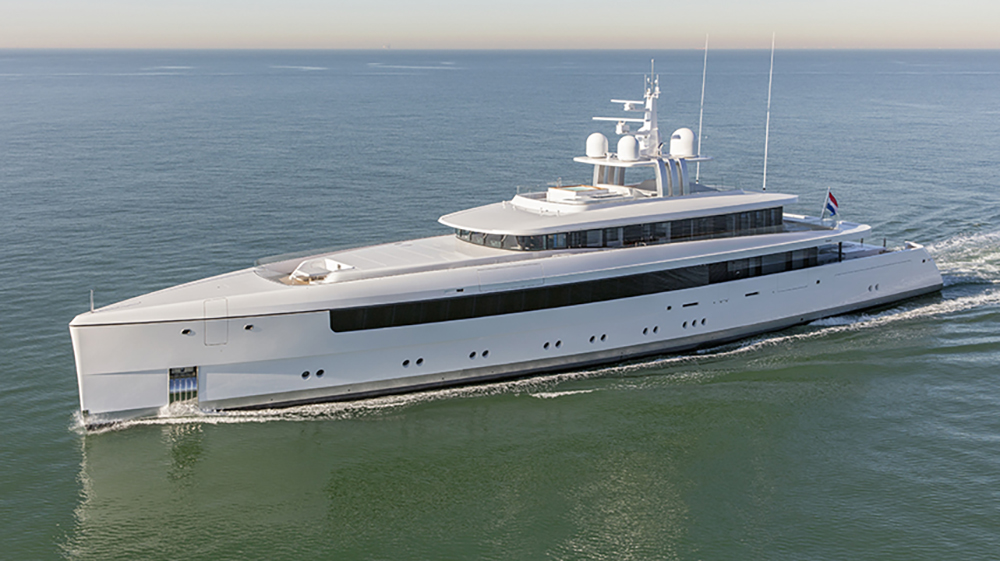 Think of it as the Prius of the seas. Najiba, the newly completed, 190-foot all-aluminum superyacht built by Dutch craftsmen at Feadship from a Vitruvius Yachts design, sips fuel like the hybrid Toyota. Well, almost.

During recent sea trials, Najiba reportedly delivered a truly astonishing fuel consumption best of just three gallons per nautical mile at its 12-knot cruising speed. That’s despite this sleek and slender motor yacht tipping the scales at 880 tons and having a couple of muscly 1,448 hp MTU 12-cylinder diesels providing the power.

The secret, it seems, is down to the highly efficient hull design—that, and a single-minded focus on making the yacht slice through water like a hot knife through butter with minimal resistance.

The creative force behind Vitruvius, ace French designer Philippe Briand—one of his many fortes is drawing super-fast racing sailboats—penned the lines of Najiba’s lightweight alloy hull. He gave the yacht a wave-piercing plumb bow and maximum waterline, and closely worked with Feadship to reduce the effect of appendages like the propeller shafts, stabilizers and thrusters.

The real-world results that came out of the extensive sea trails included an increased top speed—from the original goal of 16 knots to 17—and a cruising-speed range of more than 6,000 nautical miles compared to the projected 5,000 miles. That’s Antibes to Miami with fuel to spare in the yacht’s 23,757-gallon fuel tanks.

The choice of using lightweight aluminum was also a major factor in increasing the yacht’s efficiency. The entire hull and superstructure were built using the alloy, while the yacht’s design called for a sleek, lower-than-usual wheelhouse to reduce wind resistance at speed.

“These results mean that despite the complexity of her development and build, we have outperformed all expectations with Najiba,” explained Roderick de Vries, technical director of the Feadship yard in Aalsmeer, southwest of Amsterdam.

“It was a real ‘wow’ moment for everyone involved to see this level of efficiency achieved during sea trials. It is one thing to design such an efficient full-displacement motor yacht, but another to translate these lines and shapes into a stunning Feadship that is even faster and more fuel-efficient than we projected.”

Najiba is the fifth Vitruvius-designed yacht.  Photo: Courtesy of Feadship

Right now Najiba, which means “noble,” is with its new owner on a maiden voyage to Bergen in Norway. Chances are he won’t be looking to fill up any time soon.