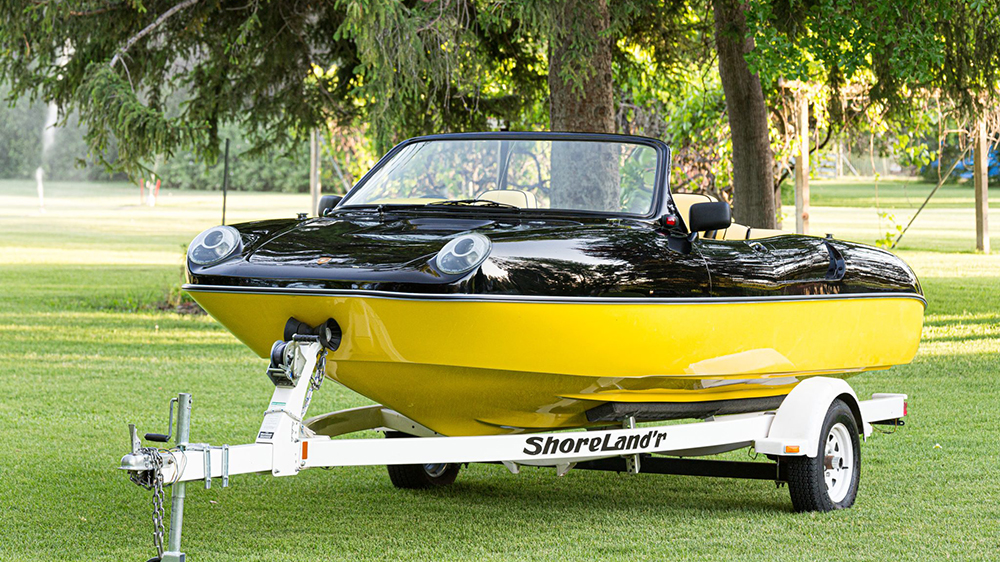 You’ve been able to venture off road in a Porsche for a while now, but now you can go off land in one too.

A 1995 Craig Craft 168 Boss nicknamed the “Porsche Boat” is currently up for auction up on Bring a Trailer. The sporty watercraft isn’t actually a Porsche, but it’s got several design cues that harken back to the German marque’s sports cars from that decade.

The Craig Craft 168 is a 16-foot speed boat that looks just like a Porsche as it cuts through the water. Specifically, it looks like the Boxster, the two-seat roadster that the automaker introduced in 1996. The boat’s curvaceous bodywork, nose, Bosch headlights, sideview mirrors, and taillights aren’t identical to those on the German convertible, but they’re awfully close. Helping highlight this is the Porsche crest on the hood. The top off the fiberglass hull is finished in gloss black, while the bottom half is done up in bright yellow.

The interior of the boat is the inverse of its exterior. It’s covered in yellow vinyl with black accents. One of the biggest differences between the boat and the car is that the watercraft has four seats instead of two. Up front you’ll find a dashboard with Porsche and Boss decals, a three-spoke steering wheel and a cockpit outfitted with a 80-mph speedometer, tachometer and gauges. Other interior features include a center console with cup holders, storage space, a Boss stereo and Kenwood speakers.

Powering the Craig Craft 168 is a GM-derived 4.3-liter V-6, which was installed last year, and a Berkeley Jet Drive with a hydraulically-actuated reverse bucket that provides both forward and reverse propulsion. The watercraft can’t drive on land, but it comes with white single-axle Shore Land’r trailer that will help make transporting it a breeze. Just think of how this will look behind your Macan?

The auction for the Porsche-inspired boat will last until next Monday. Bidding for the unique watercraft had already reached $18,000 as of press time. It may not be a true Porsche, but the boat is sure to turn heads down at the shore.