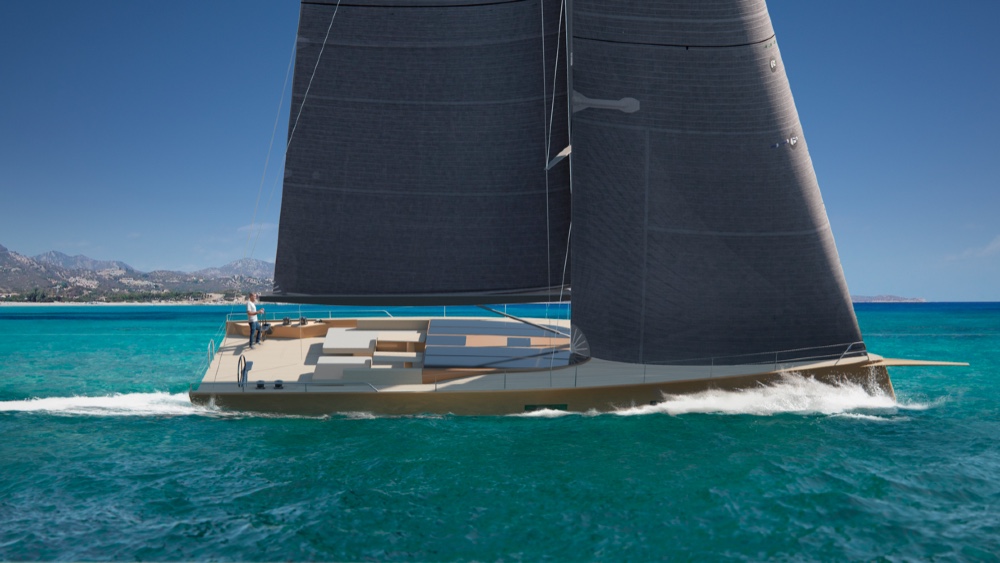 Baltic Yachts has scored a hat trick with its just-announced 68 Café Racer. The 68-ft. short-handed, day-sailer embraces sustainability, offers breakthrough technologies, and is entering semi-series production with the first boat scheduled for delivery in 2021.

The Baltic 68 is designed by Javier Jaudenes, best known for Baltic’s 108-foot WinWin, and takes its inspiration from the Café Racer era of the 1960s. The brief was to get owners on the water fast, and in style, while minimizing emissions has also been a key goal for the Finnish shipyard.

The 68’s low-emissions powerplant, featuring a 30-kW electric engine, has the ability to hydro-generate via a free-wheeling propeller while sailing. That is just one of the yacht’s many eco-friendly features, which have been developed following customer feedback.

Baltic has been thorough about building sustainability into the Café Racer. All decking is made from Lignia Yacht’s eco-friendly, durable pine instead of traditional teak, and more than 50 percent of the yacht’s hull structure is reinforced using Bcomp ampliTex flax, a naturally grown flax. This provides excellent soundproofing and saves space, compared to traditional insulation. Light oak timbers, flax composites, wicker and paper cord also feature in the interior.

Reducing overall energy consumption through more efficient battery technology has also been on owners’ wish lists, adds Hawkings. “Much like a hybrid car, the Baltic 68 Café Racer comes with a range extender that can be used to charge the Lithium ion battery bank as a ‘get you home’ supplement to battery capacity,” he says. “The range extender uses highly efficient micro-turbine technology, which has the ability to run on hydrogen.”

The only question mark over the use of hydrogen fuel is its availability in marinas and ports.

Designer Javier Jaudenes maximized the available  interior space on the 68-ft. hull, while also making it easy to sail with a small crew.  Baltic Yachts

Air-conditioning units are one of the most energy-demanding elements on a yacht’s hotel load, but Baltic has mitigated this by mixing recirculated air with fresh air to reduce the amount of power. Filters also ensure air is bacteria-free. Solar panels, with an estimated 1-kW of charging capacity, can be used to power the system in Eco Mode, relieving the load on the battery bank.

“The overall concept of the Baltic 68 Café Racer is to be straightforward and easy to use, with simple controls and ease of sail handling,” says Hawkings. “We are in discussions with several potential clients who appreciate the environmental approach of the project, the day sailer concept, the performance potential and the overall look of the boat.”

The first hull will start this spring, with delivery expected for summer 2021.