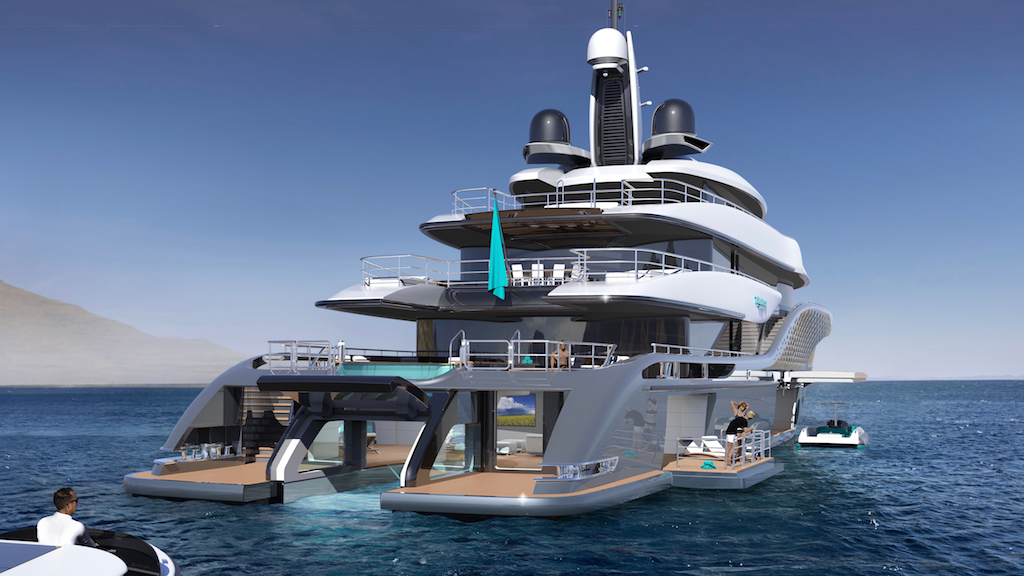 You might know Ken Freivokh from such projects as the Maltese Falcon, Dream Symphony, and the Black Pearl. His latest concept, Quantum, is a leap forward for Turquoise Yachts, which has worked with the UK-based designer on previous projects. The 253-foot Quantum is a much more ambitious undertaking, with multiple swimming pools, a four-floor atrium, a private owner’s deck, and a full helipad on the bow.

The real distinguishing feature, however, is the transom that opens on three sides, creating an open platform to the sea. The tender garage is designed to flood, so the tender can be driven in and out. When it’s vacated, the space converts to a saltwater pool. The rest of the terrace and gymnasium remain open on all sides. The transparent bottom of the swimming pool on the deck above also allows natural light to filter into the lower deck.

Freivokh designed a second bonus garage into the starboard forward section of the hull, capable of carrying a 33-foot vessel. The extra tender can be used for watersports or shuttling guests ashore.  As a package, this unique design will no doubt force more shipyards to reinterpret the transoms in that 250-foot category.

Buttoned up, Quantum has a classic profile, with a high, slightly flared bow that moves with a downward swoop toward the stern, which sits close to the water.

Like the lower transom, the designers maximized the other exterior spaces, creating a full-beam cockpit deck that joins the saloon on the main deck. On the level above, the owners have their own private deck with a pool and alfresco dining area. Beyond the large sleeping quarters, the double-height master apartment includes a nanny cabin, private saloon, office, and pantry. The full-height windows deliver 180-degree panoramic views.

The main deck features a large sitting area, with rotating seats that transform the space into a cinema and formal dining room for 14. Forward are six double staterooms. Two of the staterooms can be opened up to become VIP suites.

The real showpiece of Quantum is the atrium, which extends up four decks, combining a central elevator with transparent floors that filter natural light from the bridge deck down to the beach club. The upper bridge deck is defined by space-age touchscreen monitors for navigation, but it also has a guest perch to enjoy the view.