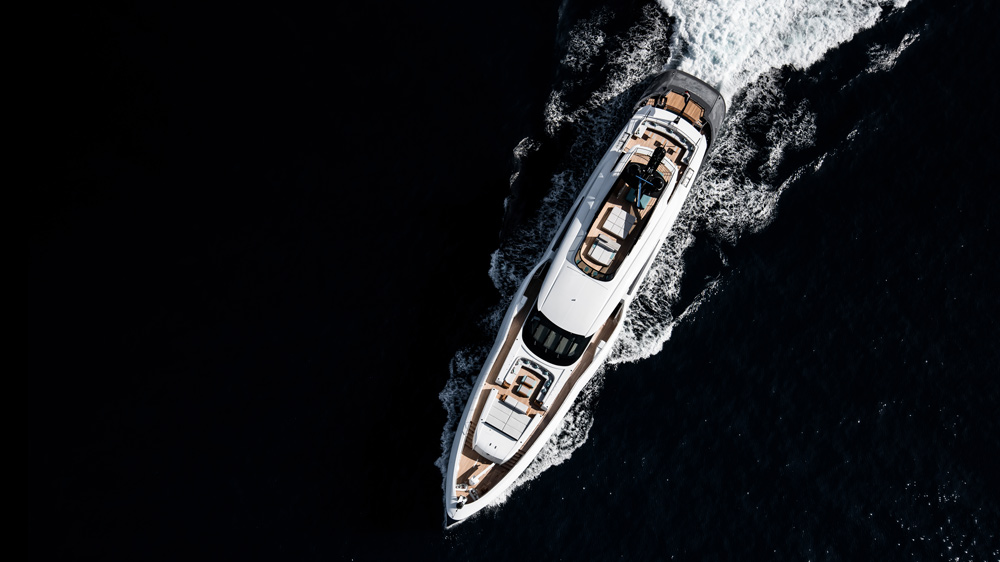 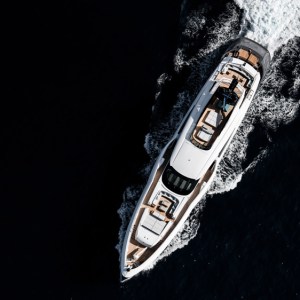 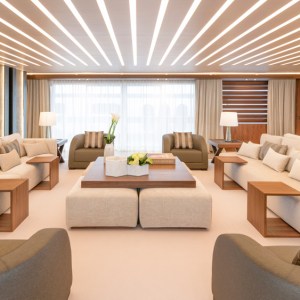 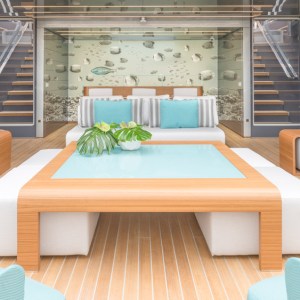 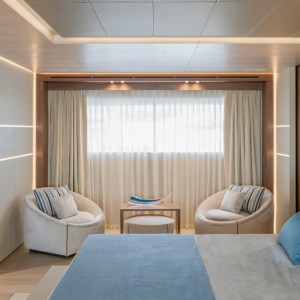 And those lucky owners, internet marketing and e-commerce moguls JR and Loren Ridinger of MarketAmerica.com, took possession of their personal utopia in March and have been using it ever since. The rest of us can experience the yacht when it makes its splashy public debut on October 31 at the Fort Lauderdale International Boat Show. (Which, for the uninitiated, is one of the biggest shows of the year—watch this space for an insider’s report from the docks later this month.) If you aren’t one of the few to have a golden ticket to board while it is docked in Florida, read on for a peek into its sweeping Enrico Gobbi­–designed superstructure.

Inside, every aspect of the superyacht has been engineered for comfort by Gobbi’s firm, Team for Design, and the resulting wide, long-lined spaces resemble an elegant beach house. The lounge areas and six staterooms have been outfitted in creamy whites, muted grays, and light woods—letting pops of turquoise and the ocean views offered up from the floor-to-ceiling windows reign supreme. Unsurprisingly, the forward-facing owner’s suite is the vessel’s crown jewel. Besides its palatial proportions, it is filled with sexy details: The bedroom overlooks a glass-enclosed Jacuzzi bath; and in addition to floor-to-ceiling glass doors that open out onto a 20-foot-long fixed balcony, there is also a sweeping starboard balcony that folds out to an above-water private terrace.

The yacht has a top speed of 33 knots.  Photo: Courtesy of Rossinavi

When they are not enjoying the 180-degree views over a glass of wine on their private balconies, the Ridingers (and up to 10 guests), will have plenty of space to lounge on the yacht’s decks. The main deck is likely to be the preferred hangout spot—it’s equipped with a glittering swimming pool, a sundeck, and sprawling outdoor lounge where guests can splash and spread out. A quick flight of stairs leads down to the beach club at the stern, which boasts 750 square feet that opens directly on sea level.

Back all the way upstairs, guests will find the spacious flydeck, which has been stretched as long as possible to give guests plenty of room to lounge as they watch the Caribbean, Mediterranean, or West Palm Beach (Utopia IV’s home berth) fly past.