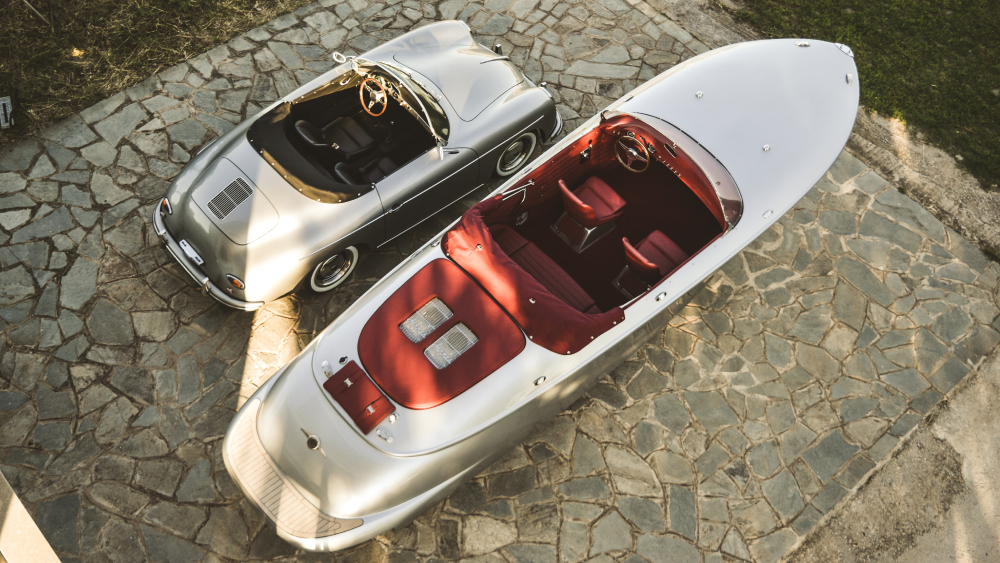 Consider the latest Hermes Speedster model from UK-based Seven Seas Yachts as a Porsche 356 for the sea—but with a futuristic twist. While the body pays homage to the German marque’s early, now iconic “bathtub” design, power is delivered from a silent, zero-emission 100 kw electric motor juiced by a 30 kwh battery pack.

Seven Seas has been building the Speedster at its Greek facility since 2017, with the original boats powered by a 155 hp Rotax engine. While that conventional powerplant remains an option, eco-conscious buyers can still count on speed, with the electric Speedster E (priced at $269,000) capable of hitting 36 mph. Throttling back to a more sedate 6 mph, meanwhile, gives the boat a run time of up to nine hours.

Design cues inspired by the classic Porsche Speedster include a cut-down, chrome-framed windshield, bucket seats, chrome-ringed retro gauges in a leather dash, twin-grated air intakes on the rear sun pad and a 356-style folding cloth top. The boat’s elegant profile is so proportionally correct that it could be mistaken for a 75-year-old custom design, particularly with its retro-looking convertible top that sets up in seconds.

A red version of the Speedster lighting up the water.  Seven Seas Yachts

The hull is an interesting design, with a forward entry angle of 72 degrees and little drag resistance. That means that, unlike other powerboats that tend to porpoise as they gain speed, this one simply lifts itself out of the water as it goes faster. The running surface also avoids pounding through big waves, giving the Hermes Speedster an unusually gentle ride and precise handling, particularly in tight turns. Cruising stability is another important trait. The smooth-riding hull is a perfect complement to the stylish topsides.

And while the Hermes name comes from the fleet-of-foot Greek god, not the French fashion house, the level of craftsmanship in the richly upholstered cockpit is enough to keep your passengers guessing.