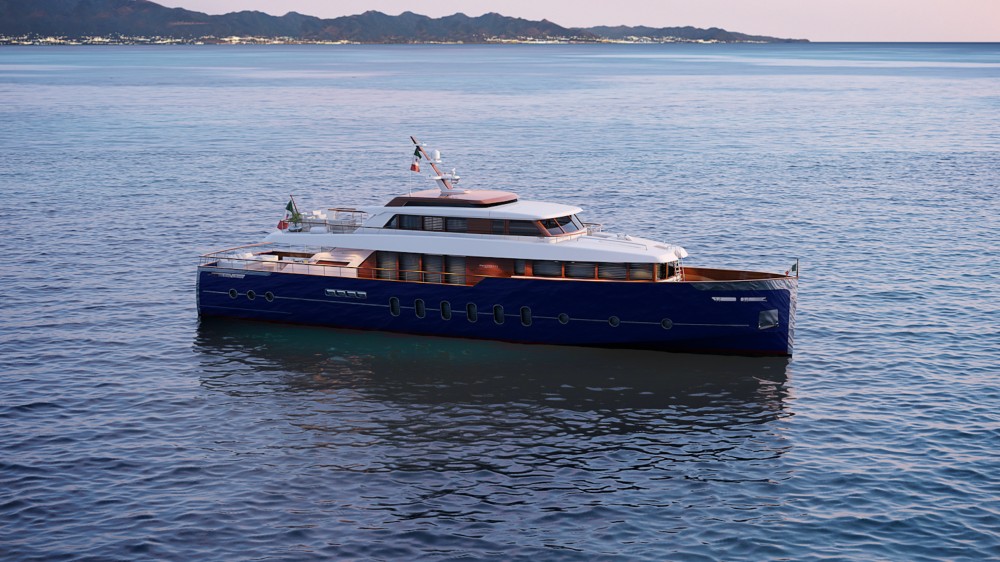 The Italian Sea Group is making the leap from custom yacht builds to serial production with the rebirth of the storied Picchiotti brand, announced just six months after its acquisition. The first Picchiotti production boat is due for delivery in the summer of 2024, with a further 15 units said to be in the pipeline.

The Italy-based yacht conglomerate, which recently launched the Admiral Kensho and the Tecnomar for Lamborghini 63, made big news when it acquired Perini Navi and Picchiotti last December for about $82 million. Perini Navi was the big catch since it’s considered royalty in the sailing yacht world.

Picchiotti had been the former owner’s motoryacht brand, and although the superyacht designs were elegant and modern—especially for a name dating back to 1575—they built only a handful before the company went into bankruptcy in 2019.

The retro style is reminiscent of 1960s post-war American yacht design, though the stern folds out into a modern beach club.  Courtesy Italian Sea Group

The latest reincarnation of Picchiotti will mark another sea change for the brand. The Italian Sea Group tapped Florence-based designer Luca Dini to retrace Picchiotti’s historical style with a new fleet of serial production yachts, ranging from 78 to 180 feet in length. They have been nicknamed the “Gentleman” yachts, and are inspired by the silhouette of American yachts of the ’60s. The intention is to pair classic lines with new technology and engineering.

“This new line, clearly inspired by the golden age of post-war yachting, immediately conquered me because it recalls historical models such as the Giglio Series or the Mistral Series by Picchiotti,” said Giovanni Costantino, founder and CEO of The Italian Sea Group, in a statement. “I am very proud to give a new voice to a brand that represents the heritage of the entire nautical industry—one of the oldest shipyards in the world.”

Dini added: “It is a project dedicated to those owners who want to stand out but are also well acquainted with tradition and the concept of gentleman yachts.”

The Mistral was another of Picchiotti’s  landmark series in the 1960s.  Courtesy Italian Sea Group

In more recent times, Picchiotti is best known for building the 338-foot motoryacht Al Said, one of the largest yachts in the world at the time of its delivery in 1982. The company went on to build the award-winning 164-foot explorer Exuma and 239-foot Grace E.

The new Picchiotti fleet will be aluminum, with a hull designed for increased efficiency. The builder is also offering the option of hybrid propulsion or fully electric engines. A thoroughly modern beach club and tender that matches the mothership will also be part of the new package.