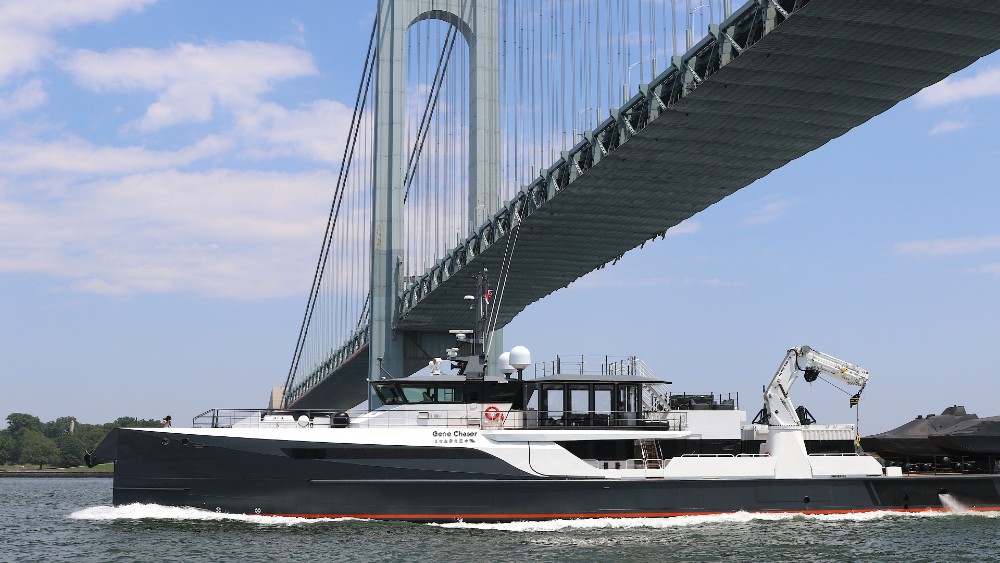 It’s not often you see a white-coated scientist, test-tube in hand, carrying out experiments in the middle of a big international boat show. But work never stops aboard the stealthy-gray Damen-built support yacht Gene Chaser.

The yacht is the newest acquisition by Connecticut-based DNA sequencing specialist, Dr. Jonathan Rothberg. Back in 2015, the entrepreneur bought the 180-foot Amels superyacht Engelberg, changed the name to Gene Machine and converted her into part world-girding luxury superyacht, part laboratory on water.

When Covid-19 hit in 2020, Rothberg, together with an ever-growing team of scientists, spent most of the year aboard the yacht, throwing their efforts into developing a reliable, low-cost, coronavirus home testing kit.

Gene Chaser with mothership Gene Machine. The two will travel together through the end of the summer.  Courtesy Damen

Fast forward to 2021, and with Gene Machine turning into more of a floating science lab, and less of a family yacht, it seems Rothberg decided he needed a dedicated support yacht. He found it at Damen Yachting’s Vlissingen yard on Holland’s windswept North Sea coast.

Damen—which acquired Amels in 1991—had built the steel-hulled 182-footer on spec as part of its YS 5009 Yacht Support range, and launched it in late 2020. Rothberg bought her, renamed her Gene Chaser and asked for changes that included converting spaces inside and out into laboratories and hubs for ongoing scientific projects.

After crossing the Atlantic in March last year, the two “Genes” met up in New York Harbor to celebrate the launch of one of Rothberg’s latest ventures—the 58-year-old has founded no fewer than eight key tech companies in the last decade and holds over 100 patents.

One of the labs aboard Gene Chaser is an active center for scientific research.  Courtesy Damen

We caught up with both yachts at last month’s Miami International Boat Show where they were moored stern-to-stern, showcasing Amels’ and Damen Yachting’s design and construction techniques.

“They complement each other perfectly. They really show how science, business and family experiences can work together,” Moena Maggi, Damen Yachting designer told Robb Report as she took us on a tour of Gene Chaser.

Maggi explains that what the support yacht does so well is “go fast.” A quartet of Caterpillar diesels packing a combined 5,600 horsepower can punch the yacht to a top speed of 26 mph.

It also fills its role as a shadow vessel to carry Gene Machine‘s tenders, toys and lab equipment.  Courtesy Damen

“It means she can leave port after the mothership and arrive at the next destination well ahead. And the boat is quite beautiful at speed, with that distinctive bow cutting through the waves. She’s extremely stable,” says Maggi.

Yet what makes Gene Chaser the perfect support vessel is the size and versatility of her expansive rear deck. There’s space here to land a helicopter, carry a fleet of tenders and toys, and stow a converted shipping container full of ATVs and motorbikes.

With her massive, Transformer-like, 13-ton-capacity crane extended, the yacht’s Fjord 42 tender, 28-foot OXpro AL8 landing craft, 20-foot Zodiac RIB and a fleet of jet skis can be hoisted and stowed on the deck.

“The yacht usually sails with eight crew aboard, simply because it takes a lot of hands to move all those toys around and get them on and off the boat,” says Maggi.

On the same deck, the traditional workshop has been converted into an open-air laboratory and a showcase for some of Rothberg’s latest technologies.

In the Damen refit, the former main deck lounge was reconfigured into the primary laboratory and is now the nerve-center for visiting scientists. They’re accommodated in Gene Chaser’s three guest cabins with beds for eight. Below decks are also cabins for the yacht’s four fulltime scientists.

Don’t expect lavish superyacht-style accommodations here. As Rothberg likes to describe the comfort level: “Think of Gene Machine as the Four Seasons and Gene Chaser as the Holiday Inn Express.”

According to the yacht’s chief engineer Malcolm Fordham, Gene Chaser’s real comfort comes when she’s out in bad weather. “We were in the Caribbean last year in some pretty rough conditions. What makes the boat different is that in big waves you just don’t slow down, that X-bow design just slices through the water like a knife,” said Fordham. “It takes a little getting used to, with lots of water coming over the boat, but the speed and stability is impressive.”

For the next few months, Gene Chaser will likely be shadowing Gene Machine for Rothberg family trips to the Bahamas and Caribbean, moving north to Maine and Connecticut for the summer, along the way conducting scientific experiments.