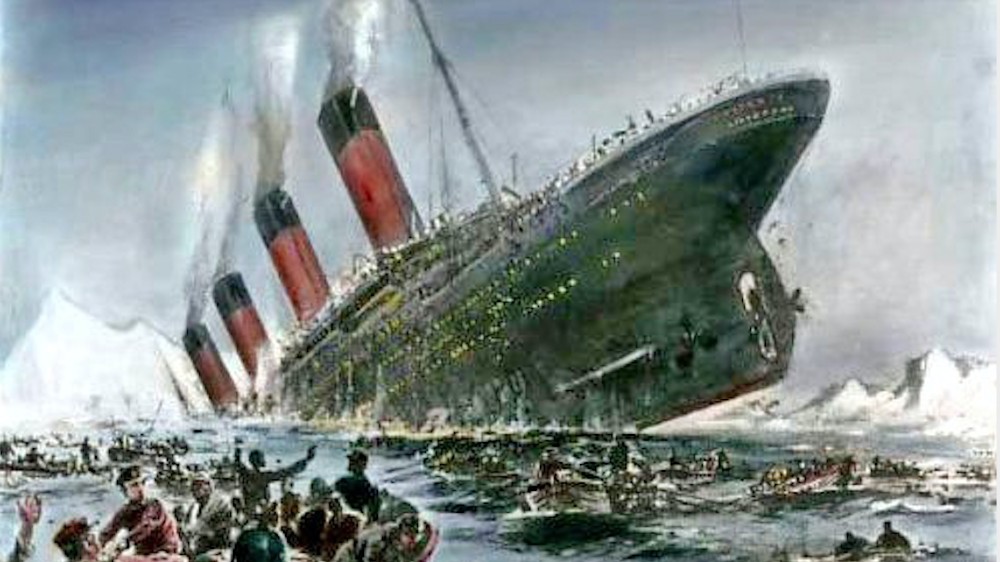 Around 11:40 p.m. on April 14, 1912, the world’s largest luxury steamship Titanic struck an iceberg, creating a 300-foot-long gash along the lower section of its hull, causing it to take on water.

Over the next three hours, the 883-foot behemoth, dubbed “unsinkable” before its maiden voyage, sank. Of the more than 2,240 passengers and crew, or “souls,” as they were referred to by the shipping line, more than 1,500 lost their lives in the early hours of April 15, mostly by drowning in the frigid north Atlantic waters.

The sinking of the Titanic is one of the most incredible human dramas that has played out in the last century. It has been commemorated by hundreds of books, blockbuster movies, multiple museums, several full-scale replicas, and even a Lego lookalike.

On its 1912 launch, the 883-ft. Titanic was the world’s largest passenger steamship, billed as “unsinkable.”  Courtesy AP

So, why the ongoing interest in the Titanic saga, 110 years after it sank?

“It was a very human story that people can relate to,” says Stephen Frazee, a trustee of the Titanic International Society. “People of every strata were on board, including people who were trying to reach America for a new life. It was a ship of dreams.”

The passenger list was a who’s who of American and British society, including the wealthiest passenger, John Jacob Astor IV, heir to the Astor fortune, who was on the first-class deck with his 18-year-old bride, Madeline Talmadge Force.

The bow of the Titanic covered in rusticles in 2010. Reports are that it has since deteriorated. Scientists estimate it will be completely gone by 2037.  Courtesy RMS Titanic

Also on board: Macy’s owner Isidor Straus and wife, Ida; industrialist Benjamin Guggenheim, with his mistress, valet and chauffeur; and J. Bruce Ismay, managing director of Titanic’s parent White Star Line. Thomas Andrews, lead designer and head of the Harland and Wolff shipyard in Belfast, which built Titanic, was also on board for the vessel’s maiden voyage.

During the early 20th century, luxury ships were the way the world’s wealthiest traveled, and Titanic set a new standard in the fiercely competitive transatlantic steamship race. It was rumored that Titanic was attempting to break the speed record of the rival Cunard’s steamship Mauretania.

Beyond the first- and second-class decks, more than 700 immigrants were also on the lower decks in the third-class section, which had better conditions than other passenger ships of the time. These immigrants and the 2,000 pounds of mail and cargo the Titanic was carrying assured that it would make a profit.

The boat was built in Belfast at the Harland and Wolff shipyard. It took 14,000 workers to complete.  Courtesy Wikimedia Public

“The Titanic is one of the few times where history lines up with good storytelling,” says Bill Sauder, director of Titanic Research for RMS Titanic, Inc. “This story had so many components—a technically advanced ship, crowded with millionaires, and two hours and 40 minutes before it sank—to create dozens of dramatic endings. It didn’t need embellishment.”

As the giant Titanic tipped bow-first into the ocean, with its lights still on, the stories were indeed dramatic. The evacuation was chaotic, with mostly women and children loaded into lifeboats designed to hold 65, but typically launched with half that number. There were also only 16 lifeboats for the ship, another pointer to the builder’s over-confidence. Many of the drowned were woman and children.

The wealthy are most remembered. Thomas Andrews was last seen in the First Class smoking room, staring at a painting of a ship on the wall. Jacob Astor made sure his wife Madeline made it into a lifeboat and kissed her goodbye before the boat was lowered. Isidor and Ida Straus, refusing to be separated, went to their cabin. Benjamin Guggenheim changed into formal dress, returned on deck with his valet, and said: “We are dressed in our best and are prepared to go down like gentlemen.”

Those kind of stories, often backed by the 706 survivors, helped fuel the Titanic’s legend, recounted in the 1997 blockbuster Titanic by James Cameron (who had earlier visited the wreck to film a documentary) and an earlier 1958 movie called A Night To Remember.

These days, the ship is sitting in two pieces 12,000 feet below the surface on the ocean floor, covered in rusticles, with much of the hull having been eaten away by salt and galvanic corrosion, metal-eating bacteria and ever-changing sea currents. Fields of debris—consisting of thousands of passengers’ items and ship’s pieces—extend hundreds of yards from the wreck.

Multiple expeditions sought to discover and even recover Titanic’s hull, with a bizarre list of ways to raise the wreck, from inserting millions of ping-pong balls or injecting tons of Vaseline into the hull. After one unsuccessful attempt that garnered much criticism, RMS Titanic Inc. was able to raise a 20-ton part of the hull nicknamed “the big piece,” that had broken off from the main ship, with walls of two first-class cabins.

Some of the artifacts like the docking bridge telegraph need to be preserved in saltwater to avoid decomposition.  Courtesy AP

But the legendary ship remains nearly 2.4 miles below the surface, at the bottom of the sea, too fragile to be disturbed.

“It looked very peaceful,” underwater adventurer Victor Vescovo told Robb Report. Vescovo undertook five dives down to the wreck aboard his Triton submersible, Limiting Factor, in 2019. He recalls hovering over different parts of the ship’s hull, and describes it as a very somber, sobering experience.

“The most fascinating aspect was seeing how the Titanic is being consumed by the ocean and returning to its elemental form while providing refuge for a remarkably diverse number of animals,” said Triton Submarines’ president Patrick Lahey, who participated in one of the dives.

The sinking, which took nearly four hours, created a number of dramatic stories that were recounted by the survivors.  Courtesy Wikimedia Public

For nearly two decades from 1987 through 2004, RMS Titanic Inc. carried out a series of dives that led to the recovery of nearly 6,000 items. It includes passenger suitcases, wine, bathtubs, windows, washbasins, jugs, bowls, hand mirrors and other personal effects that humanized the disaster, as well as pieces of the ship. The company has been involved in ongoing legal battles for nearly 30 years over salvage rights and access to the wreck itself.

“Protectionists” like maritime scientist Dr. Robert Ballard, whose 1985 expedition first discovered the wreck, have argued that Titanic should be left undisturbed as a mass grave. The “conservationists,” largely represented by RMS Titanic, argue that the wreck will be gone by 2037 and the contents should be preserved.

That legal battle is ongoing, but the Titanic legend will live on. There are nearly a dozen museums around the world that focus on the Titanic—from exhibits in small maritime history museums in France, to the impressive Titanic: The Artifact Exhibition at the Luxor in Las Vegas, and a similar RMS Titanic-owned exhibit in Orlando, to the contemporary and dramatic “The Titanic Experience” museum in Belfast, Northern Ireland, situated just yards from where the ship was originally launched.

This iceberg  may have gouged a 300-foot tear in the hull. A photographer from another vessel noticed a long red paint stripe on the iceberg a day after the sinking.  Courtesy Wikimedia Public

“We go in on a regular basis to change out the artifacts, especially those that are light sensitive,” says Jeff Taylor, director of collections for RMS Titanic, Inc. “We recently did a nice rotation of smaller items like currency notes, playing cards and other small objects.”

The company took great pains to build items like the Titanic’s grand staircase and passenger cabins to historical accuracy. The artifacts not on display are preserved in a climate-controlled facility in Atlanta, including several preserved in water. Pre-covid, Taylor says the company would have two or three traveling exhibitions outside the US.

A lifeboat on the bow. The Titanic was fitted with only 16 lifeboats for the voyage.  Courtesy RMS Titanic

Several full-sized replicas of the Titanic are being built. The first is a land-locked attraction in a Sichuan, China, province theme park, hundreds of miles from the ocean. Once the attraction opens, visitors can pay to spend the night aboard the vessel.

Another full-scale version, Titanic II, was announced in 2013 by Blue Star line in Australia. It was promoted as having the same layout (though the new ship is wider and heavier) as the original Titanic, with the same design of the staterooms (though these will have en suites). It will feature the magnificent grand staircase and even an “Edwardian-era” gym.

The legend of the Titanic is so popular that it has prompted countless books, several blockbusters and a half-dozen museums. Here’s a Lego version at a recent exhibit.  Courtesy AP

The company announced in 2016 that work on the project had restarted after delays, and in 2018, it said it would be launched in 2022. But the website hasn’t been updated since 2018, so history buffs will have to wait for the ultimate experience.

“I don’t know what it is about a disaster like this that attracts this kind of longevity,” says Taylor. “But this one demonstrated the hubris of man. Something about it captured peoples’ imaginations to the point where it still resonates today.”