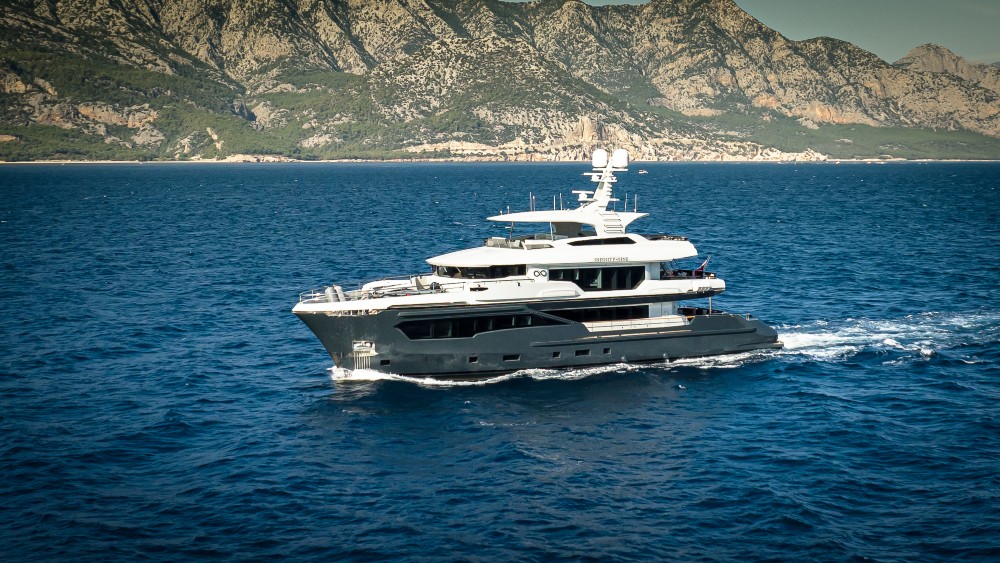 Former San Antonio Spurs’ star Tony Parker got an early Thanksgiving present this month, with the delivery of Infinity Nine, a 110-foot explorer yacht. The Turkish-built yacht underwent sea trials in August, and then headed back to the AvA shipyard for three more months for modifications Parker requested, before its November delivery.

The second hull in the Kando110 series mates a navy-colored steel bottom to a white aluminum superstructure. It looks more conventional, especially with its arrowhead bow, than most explorer yachts. “The rugged hull has steel that’s thicker than other yachts come close to,” said Atilla Küçükdiker, chairman of AvA Yachts, in a statement. Infinity Nine has a range of 6,500 miles, which would get it across the Atlantic and nearly back again. The foredeck is all business, loaded with the tender and toys, rather than the usual social lounges of non-explorer yachts.

The superstructure is nicely tiered with exterior spaces, from the top bridge to the stern area near the water. The yacht also has a large beach club, with tables and lounges.

Other social areas peak out both fore and aft, including al-fresco dining spots, gatherings for parties and private nooks. The Jacuzzi on the upper deck is one feature that shows it will be a very comfortable explorer, even on long voyages.

The 333-gross-tonne interior is unusually spacious for a boat this size, with a generous salon and dining area and six staterooms. Instead of the usual floor-to-ceiling windows in the salon is a more buttoned up layout with less glass, and more of a sense of privacy and protection.

A leopard-patterned rug is a motif that runs across the interior, from the salon all the way to the amidships main suite, with its full-beam layout. The large bed sits in the center with windows around, with an open door to a private patio on the foredeck. The main cabin also has a massive, full-beam head that, like other features on Infinity Nine, is a best-in-class design.

Parker will be enjoying the boat from his San Antonio home, though he’ll no doubt be using it in the Med during the summer, since he grew up in Belgium. It’s built for crisscrossing the Atlantic.