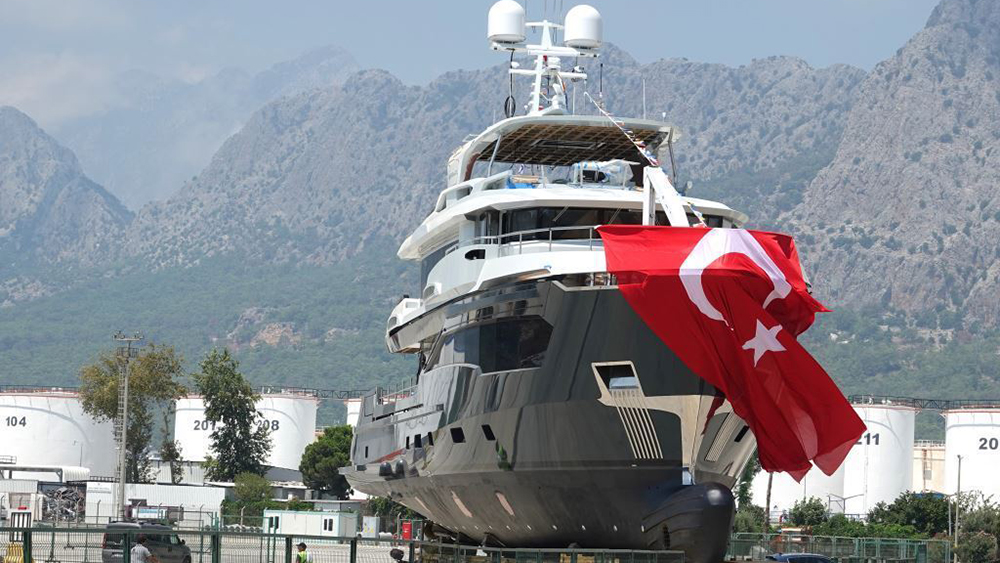 Quick, nimble, big and powerful: These are just some of the qualities four-time NBA world champion Tony Parker has in common with his first superyacht.

The 115-footer, which was delivered by AvA Yachts last week, has been christened Infinity Nine after the number “9” on the back of the former player’s San Antonio Spurs jersey. The retired guard reportedly made several visits to the Turkish yard to see the yacht’s build progress before it was officially launched in Antalya on Friday, August 5.

Infinity Nine is the second hull in the Turkish yacht builder’s Kando line of contemporary explorer yachts. Designed and engineered in-house, the vessel is characterized by a sturdy steel hull, an aluminum superstructure and a prominent bow. She also sports an extended swim platform at the stern to give the past All-Star direct access to the sea.

Infinity Nine features a custom interior with “radical” styling, according to AvA. With an impressive volume of 320 GT, the four-decked yacht offers five double guest cabins and a full-beam owner’s suite of 312 square feet that comes with its own private balcony.

Outside, meanwhile, there is ample deck space for lounging, along with a beach club and gym on the upper deck and a Jacuzzi on the large, partially covered flybridge. Parker, who retired in November 2019, will have plenty of spots to kick back and relax.

As for grunt, Infinity Nine is equipped with Volva Penta diesel engines, bow thrusters, fin stabilizers and advanced electronics. Although the vessel’s top speed has not yet been revealed, AvA says it has a go-anywhere range of more than 6,000 nautical miles. As such, Parker will be able to sail from his home in San Antonio all across the globe.

The vessel was launched on August 5.  AvA Yachts

“Infinity Nine is testimony to the outstanding skills of all the workers we have here in Antalya and a truly superb example of AvA Yachts’ exciting Kando series of contemporary explorer yachts,” AvA’s chairman and founder Atilla Küçükdiker said in a statement.

In other words, Infinity Nine is the yachting equivalent of a slam dunk.