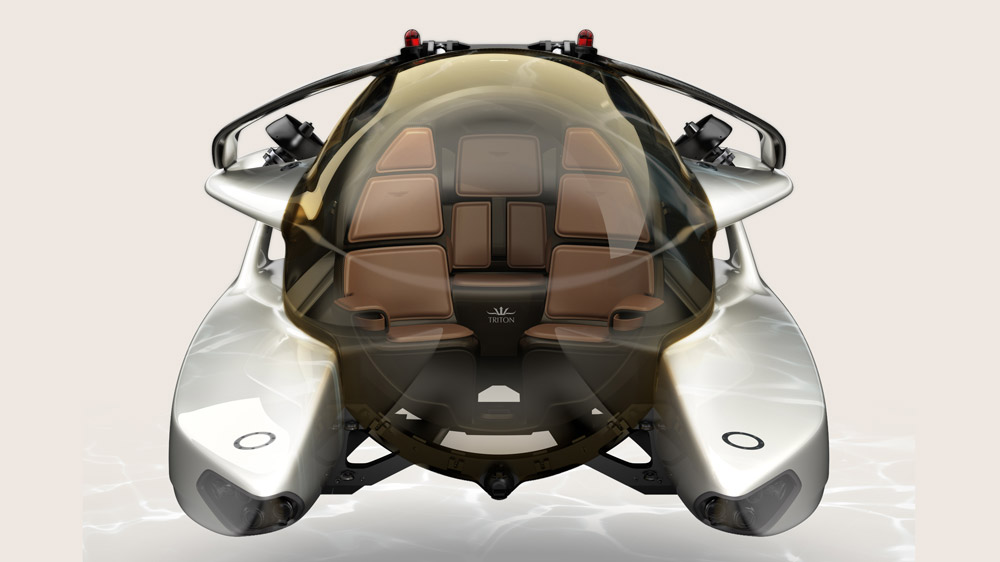 Until this year, personal submarines were more about function than form. The bubble-like glass covers and slow, meandering speeds were ideal for taking a leisurely jaunt around a coral reef. They had research-lab looks with a Jacques Cousteau seal of approval, but not a lot of panache.

Project Neptune will change all that. The limited-edition sub is a joint project between Triton Submarines and Aston Martin. The unlikely partners have been working on a three-person submarine that can stay underwater for eight hours, with a deep dive of 1,640 feet. The Triton brand has appeared on many documentaries combing ocean depths, but Aston Martin has added levels of style that this segment has never seen. The British carmaker’s design team helped Triton in redesigning Neptune’s body style while giving it an upgraded interior.

Project Neptune’s “sprint” speed of five knots may not sound like much, but it has four times the acceleration of Triton’s flagship 3300/3. “We afforded as much attention to the hydrodynamics as the visible surfaces,” says Marek Reichman, Aston Martin’s executive vice president and chief creative officer. “Some of the detail will never be seen, but its effect will be felt.”

The custom interior includes hand-stitched leather and carbon-fiber trim, with a focus on ergonomics. Aston Martin’s in-house design team conceived a range of three designer specifications for Project Neptune. Bespoke options will be available via Q by Aston Martin, the company’s customization service. And different from installing interiors on a sports car, the Triton’s interior elements will be lowered through the hatch and constructed inside the hull.

“It was assembled without obstructing the panoramic sight lines that Tritons are famous for,” says Triton’s chief technical officer John Ramsay.

Side view of the submarine  Photo: Triton

When Triton begins delivery of its production models in early 2019, Project Neptune will push the personal submarine concept into a whole new realm. If you urgently feel the need to submerse yourself in the sea, there are a number of personal submarines you can explore with right now.