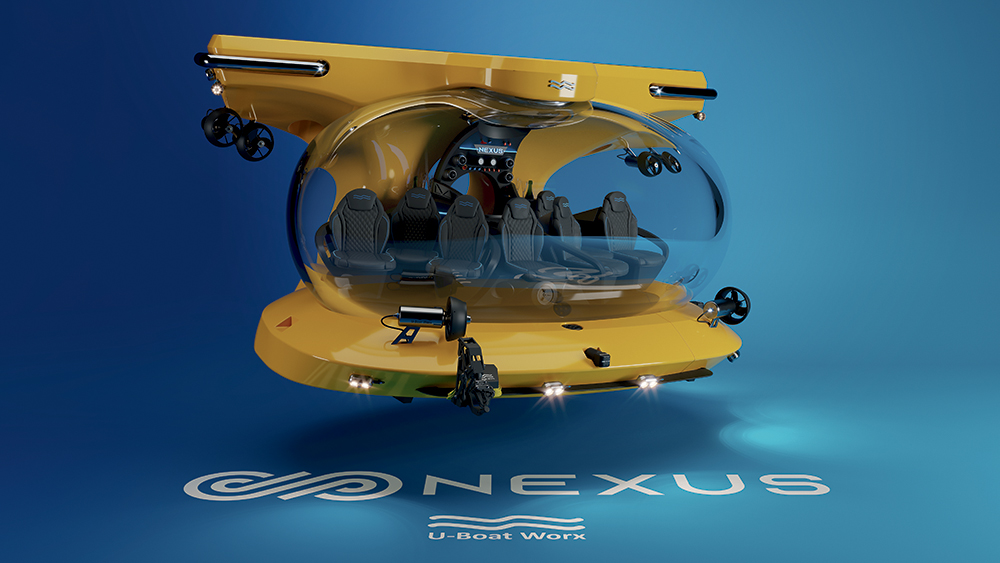 The nexus between us and the ocean could soon be a little stronger thanks to U-Boat Worx.

The Dutch outfit, which specializes in private and commercial submersibles, has just unveiled a new series of subs designed to take intrepid explorers some 650 feet below the surface of the sea.

Titled Nexus, the new line comprises a nine-person flagship and a smaller, lighter seven-seat model. The pair are each equipped with a 62 kWh battery that allows them to run for up to 18 hours straight and dive up to 10 times a day. This means up to 80 guests can take a sub-sea adventure daily.

The Nexus sub is available with nine or seven seats.  U-Boat Worx

The Nexus subs are also multi-directional. This capability, which is said to be unique to the U-Boat Worx fleet, allows the vessels to maneuver in any direction with ease. Ten silent thrusters, meanwhile, provide the power for “unmatched speed,” which is apparently around 3 knots.

You can expect a high level of comfort onboard, too. Both vessels feature ultra-large elliptical acrylic pressure hulls and offer 25 percent more interior space than competing models, according to U-Boat Worx. The entrance hatch is also reportedly the largest to ever be incorporated on a submarine of this size and can be paired with an optional elevator for easy access inside.

Just like U-Boat Worx’s popular Cruise Subs, of which the company has sold more than 20, the Nexus models feature revolving seating to give passengers the best vistas no matter the direction the submarine is traveling. Furthermore, the diving tanks are mounted up top to ensure no pesky gear spoils your view. Similar to the Triton 660/9 AVA and 660/7 AVA subs, which were revealed last December, the unobstructed views help create a stunning cinematic experience for divers as they explore under the sea.

The duo can be launched off a ship or deployed from land. Each sub is also fitted with a simplistic Manta Controller—kind of like a joystick—which passengers are able to use under pilot supervision. Now that’s how you create a connection between us and the underwater world.