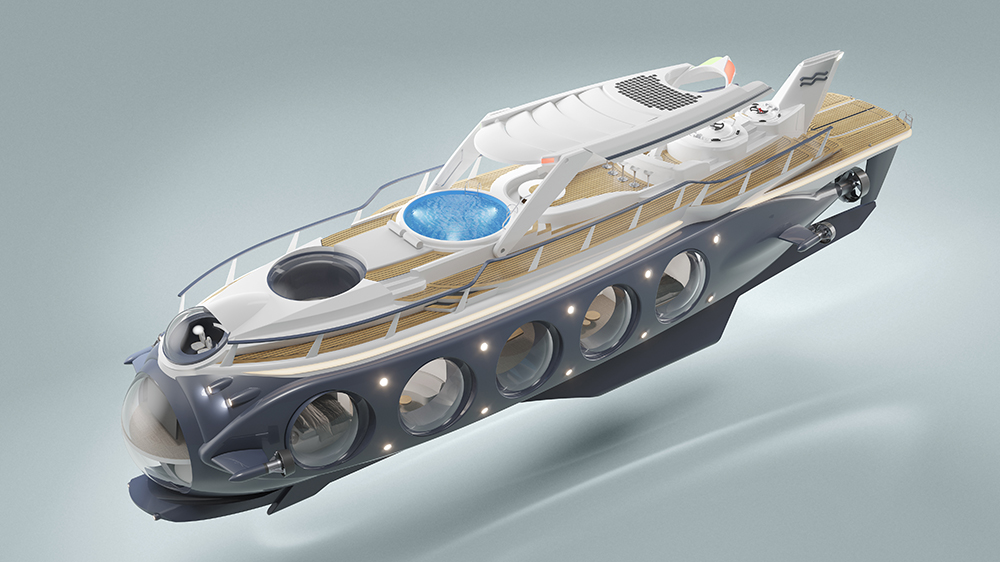 The Dutch outfit, which specializes in both private and commercial submersibles, presented a new 123-foot vessel at the Monaco Yacht Show last week that can function as either a superyacht or a submarine.

The 1,250-ton hybrid, known as the Nautilus, features a diesel-electric propulsion system that allows it to cruise across the ocean at speeds of up to nine knots or travel underwater at four knots. It can also dive to 656 feet, according to U-Boat Worx.

“People that have decided to buy a yacht will now have to consider if their vessel of choice can also dive down to 200 meters,” U-Boat Worx chairman and founder Bert Houtman said in a statement.

The superyacht submarine will be able to stay underwater for up to four days, but can only cruise underwater for six hours at a time. As an added bonus, the Nautilus can make a quick escape in the face of choppy waters.

“If the sea becomes too rough, you simply dive and continue your voyage in comfort,” Houtman adds. “With the Nautilus, the yachting market will never be the same again.”

The luxurious interior offers all the comforts of a superyacht and can be fully customized by the client. As standard, the layout comprises a combined lounge and dining area of 538 square feet, along with a fully equipped galley, one owner’s suite, four staterooms and sleeping quarters for up to six crew. You’ll have some pretty incredible underwater views, too, thanks to the large circular windows throughout.

When above the water, seafarers can make use of the massive sundeck, which is equipped with a freshwater pool, a bar and an alfresco dining table. This area is neatly retracted before the sub slips below sea level, of course. The Nautilus is also fitted with a new, pressure-resistant electric tender called the Aronnax that can transport up to five seafarers to underwater dive spots. The tender is stowed under the aft deck and stays outside while the Nautilus is diving.

U-Boat Worx says the Nautilus can be delivered within 30 months and starts at roughly $24.5 million (€25 million). Not bad considering it’s two vessels in one.