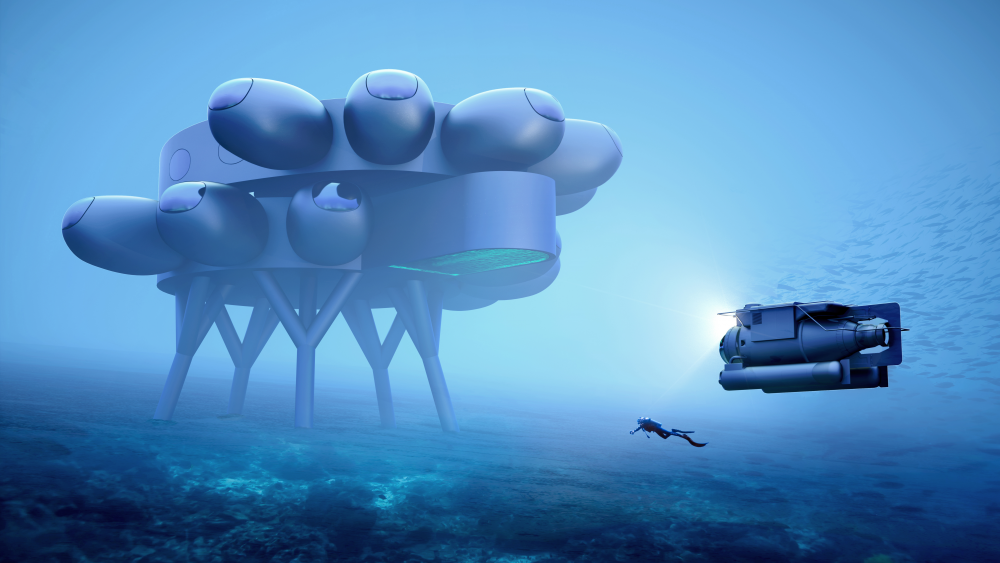 Yvés Bahar and fuseproject
Space is all the rage these days, but it can’t hold a glowing anglerfish to the mysteries of the deep blue sea.
Just ask one group of researchers, who will eschew the cool-kid cosmos to study the complexities of the ocean by living on its floor. Swiss designer Yves Béhar has unveiled plans for a new underwater research station that will be situated 60 feet underwater. Named Proteus for the Greek ocean god, the structure will span 4,000 square feet—three or four times as large as previous underwater habitats, which are typically the size of a school bus. The station will allow 12 researchers to live in the ocean full time while studying sea life.

Proteus is the brainchild of the Fabien Cousteau Ocean Learning Center, a nonprofit committed to educating people about our oceans and conserving them. Fabien Cousteau, grandson of famed ocean explorer Jacques-Yves Cousteau, envisioned Proteus as an underwater version of the International Space Station. Like its star-flung cousin, this sea station will house scientists and academics, who will live there and conduct research for over a month. The high-tech center will offer all the tools you’d find in a oceanographer’s lab, so the researchers can study climate change’s effect on the sea, extract valuable bio-compounds and discover of new species of marine life. It may even be used to help train astronauts for space travel.

A top-down view of Proteus.  Yves Béhar and fuseproject

Related: This NASA Astronaut Just Became the First Woman to Dive to the Ocean’s Deepest Point

It certainly looks sufficiently sci-fi. Béhar envisions the underwater station as one large, main habitat, with a series of modular pods attached all around. They can be used as labs, sleeping quarters, bathrooms, life support systems, medical bays and more.

Proteus will also be home to the first underwater video production studio, which will provide continuous livestreaming for educational purposes. There will also be a greenhouse—another first in the marine world—where residents can grow fresh fruits and vegetables.

The pods jutting off from the main habitat are modular and have many different functions.  Yves Béhar and fuseproject

“In many ways, Proteus is our generation’s Moon landing,” said Costeau in a statement. “Before it was reality, the Moon landing was just a dream that hardly anyone thought could come true. I want to explore the oceans of Mars—but until we can go there and return safely, the Earth’s oceans still hold quite a few secrets that are the keys to our future.”