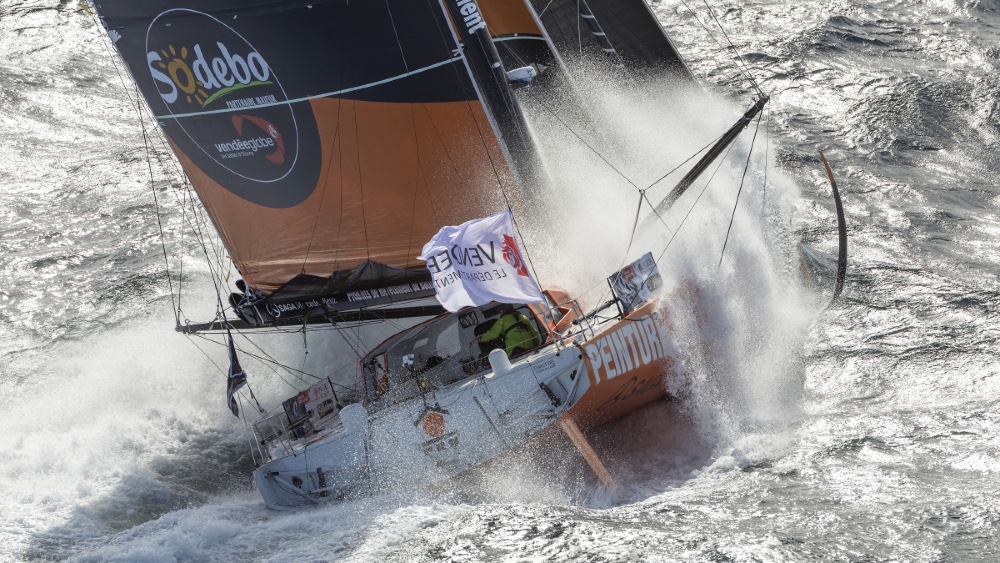 One of the most dramatic sea rescues ever in the Vendée Globe happened early yesterday morning when Kevin Escoffier, skipper of the abandoned racing yacht PRB, pulled himself from a life-raft and onto a competitor’s boat in 18-foot swells and howling winds in the Southern Ocean. Jean Le Cam, who had diverted his 60-foot yacht Yes We Cam! to search for Escoffier, had himself been rescued 12 years earlier in this nonstop, single-handed, around-the-world sailing race.

Within two weeks of its start, the ninth edition of the Vendée had seen two of its top boats break up in the ocean. Jérémie Beyou’s boat Charal lost its mast just two days into the race, and limped 600 miles back to the starting point in Les Sables d’Olonne, France. A rudder on Hugo Boss broke in the middle of the Atlantic and its skipper Alex Thomson was forced to leave the race and sail 1,200 miles towards Cape Town, South Africa. Thomson had been favored to win this year’s Vendée with his highly technical and very fast foiling yacht.

But PRB’s sinking on Monday was the most dramatic—and dangerous—event in what is considered the most extreme race in sailing.

This is Escoffier in his survival suit after being rescued by Jean Le Cam following a long night’s search and rescue in the Southern Ocean.

“The boat nosedived into a wave,” says Escoffier in an interview. He was then in second place in the race, navigating towering 18-foot seas in the Southern Ocean at dusk. But instead of coming back out of the wave, the boat split in two, and the bow pointed at a 90-degree angle towards the sky, while the rest of the yacht was flooded.

Within seconds, Escoffier was up to his waist in water. “I put my head down as a big wave was coming and had time to send one text before the wave fried the electronics,” he says. “It was crazy how fast it happened. I’ve seen a lot [on these offshore races], but that’s a first.” The breakup of the boat happened within five seconds, Escoffier estimates. His cryptic two-line text told his support team he was abandoning ship. “This is not a joke,” were his last words.

The 40-year-old, a veteran of multiple around-the-world sailing races, barely had time to get into his survival suit and launch the life raft before his boat sank. His emergency beacon gave search teams his approximate location, but in these fierce conditions at night, any rescue would be like finding the proverbial needle in a haystack.

The Vendée is considered the most extreme around-the-world race. Competitors sleep two or three hours per day, eat high-protein gruel and spend the rest sailing through the worst conditions at the fastest possible speeds. They typically plan routes that are dozens, if not hundreds, of miles away from their nearest competitors, looking to save precious minutes to beat the other sailing yachts. The 60-foot boats are high-tech, lightweight and barebones, built to be sailed by one person in the roughest waters of the world.

After Escoffier took to his life raft, he was very much alone. Le Cam, who was racing his fifth Vendée, diverted from his course to try to find the fellow Frenchman. When he arrived two hours later, he found the life raft but was unable to maneuver for a rescue because of the towering swells and big winds. As miraculously as he’d found Escoffier in the tiny life raft, Le Cam lost him and spent the next few hours trying to relocate the small light beacon in the dark ocean.

“I was so happy to see Jean,” says Escoffier of the initial attempt. “But it was impossible to get from the life raft to his boat. I knew I’d have to spend the night in the raft.”

Escoffier’s boat was stuck under a huge wave and broke in half. He had only seconds to send a distress call and evacuate as it sank.  Courtesy Yann Riou/Polaryse

Hearing that Escoffier was lost again, the race organizers diverted three other racers to try to find the life raft.  Boris Herrmann, sailing Seaexplorer, was one. “I was composed when I was searching,” he says. “But I knew finding him was pure luck. So I prayed.”

Herrmann echoed the sentiments of other racers. “We’re all racing but there’s a solidarity there,” he says. “The other sailors are more important than the race. There was absolutely no question that we’d abandon the race to look for Kevin.”

After several hours, Le Cam located the life raft again, and was able to maneuver into position for a rescue. Le Cam threw a line from Yes We Cam! and Escoffier was able to drag himself out of the life raft into the water, and onto the boat’s stern.

Jean Le Cam had himself been rescued by another racer in the 2008 Vendee Globe after his boat capsized in the Southern Ocean.  Courtesy Jean-Marie Liot/Alea

“’Sorry to disturb your race,’ was the first thing I said to Jean,” says Escoffier. “He made a joke that he had disturbed other races earlier.”

Hearing Escoffier had been rescued was “the best moment ever,” says Herrmann, adding that he “did not want to think about what could’ve happened.”

“We all know this kind of thing can happen,” said Alexia Barrier, skipper of TSE 4MYPLANET, noting that this portion of the race across the Southern Ocean is the most treacherous. “It’s nice to win, but it’s better to finish in one piece,” she added. “After we get through the Southern Ocean, we’ll go into race mode again. For now, it’s a little bit scary.”

Hugo Boss, the race’s favored yacht, also dropped out after one its rudders was damaged.  Courtesy Hugo Boss

Mike Golding, a veteran racer turned analyst, says those involved in the rescue will be “awash in adrenaline” for a day or two before returning to race mode and facing the rest of the Southern Ocean. Herrmann, who remains in sixth place, described “waves of emotion” after the rescue.

Race organizers will discuss how to adjust times for the boats involved in the rescue. Escoffier may be picked up by the French Navy so Le Cam can continue the race.

“It’s still hard to believe this happened,” said Escoffier in a Skype call. “It seems like a bad dream.”

The Vendée is expected to conclude in early February. There are 30 racing yachts left among the 33 that started on November 8th.