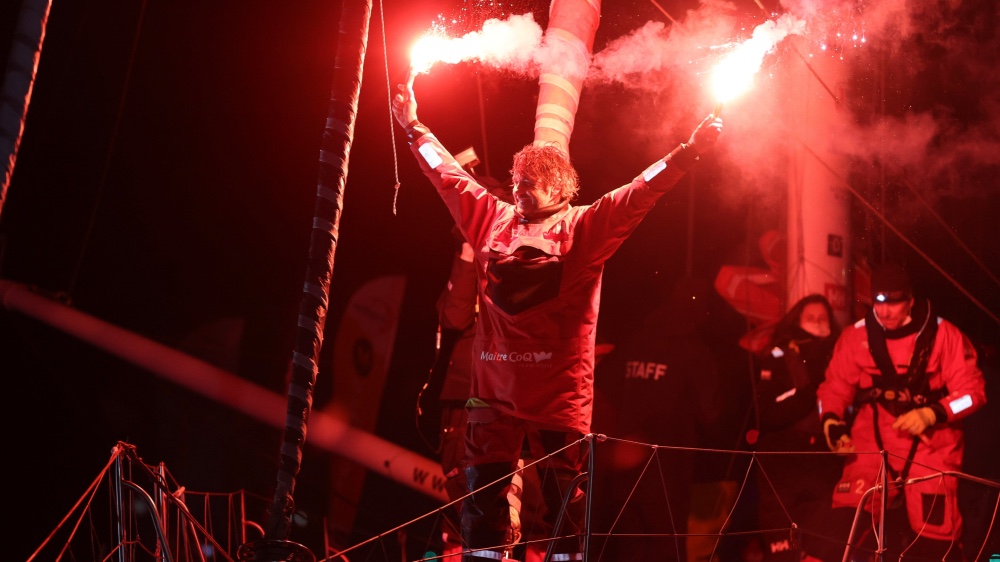 The Vendée Globe sailing race ended last night just as it started 80 days earlier—with high drama on the high seas. The solo, round-the-world race, considered the “Everest of sailing,” was hard fought until the very end, with five potential sailors in the running until the last stretch and no clear winner emerging until hours after the first sailor crossed the finish line.

Charlie Dahlin, the 36-year-old skipper of the 60-foot racing yacht Apivia, sailed from the foggy Bay of Biscay into the coastal French town of Les Sables-D’Olonne, where the race had started. His time of 80 days, six hours, 15 minutes and 47 seconds was the fastest of the 2020-2021 event. But behind him were two sailors who could potentially be named the Vendée winners because they had participated in the search and rescue of another racer whose boat had broken up and sunk in November.

Boris Hermann, who was closing in on Dahlin, had been awarded compensation time of more than six hours for his part in the rescue, and behind him was Yannick Bestaven, who had even more time—10 hours and 15 minutes—to deduct from his final timeline.

Eric Dahlin was the first sailor to make it across the finish line, but he wasn’t the race winner.  Courtesy Vendee Globe

It wasn’t Hermann’s night. Just 90 miles from the finish, in the dark ocean, his racing yacht Seaxplorer-Yacht Club de Monaco crashed into a fishing trawler, damaging the yacht’s starboard foil and forcing it to limp towards Les Sables-D’Olonne. He had completed 99.6 percent of the 23,400-mile race, spending 80 days in the world’s most remote oceans, often with sleep deprivation and extreme cold. Like all the racers, Hermann was always trying to find an edge in the race. On the final day, many expected him to claim first place. Hermann himself was unhurt, though clearly shaken by the unfortunate event.

It was just another day in the Vendée, which had seen a record 33 racers start the race and only 25 complete it, with the others experiencing broken boats in brutal sea conditions, sails torn asunder from 50-knot winds, and, in the case of Kevin Escoffier, a sunken race boat. Escoffier, who watched his boat break in half and sink in minutes, was forced into a life raft in the middle of a storm in 20-foot seas. He was lucky. Most times, other sailors were typically hundreds of miles away from each other, following different courses to get an edge with the weather.

Fortunately for Escoffier, Hermann, Bestaven and two other sailors were relatively close. Escoffier’s dramatic rescue by Jean Le Cam was one of the biggest highlights of this year’s race. Le Cam himself had had to be rescued during the 2009 Vendée.

Yannick Bestaven sailed a strong, smart race but was rarely the leader. With ten hours deducted from his final time for his aid in the rescue of another sailor, he emerged as the winner.  Courtesy Jean-Marie LIOT / Maître Coq

In the end, Bestaven was declared the winner, thanks to his compensated time. He crossed the finish line third, behind Dahlin and Louis Burton. Dahlin had consistently led the race, which follows a traditional southern clipper route around three capes—Cape of Good Hope, Cape Leeuwin and Cape Horn—while sailing across four oceans, including the hostile Southern Ocean. Dahlin, a first-time Vendee sailor, had experienced challenges during the race, including having to repair a damaged port foil that severely compromised his vessel’s sailing abilities.

The repair involved a full day. For hours, he was attached to a halyard, swinging over the side of the pitching boat to fit a replacement part into the broken area. “I don’t know how many times I went back and forth—30 or 40 times—to adjust the piece to fit the case,” he said.

Many others also had to repair broken hulls or other parts of their yachts to move forward. The original race favorite, Alex Thomsen, was forced to retire within 10 days of the start because of irreparable damage to his yacht Hugo Boss.

Borris Hermann, at one point favored to win the event, crashed into a fishing trawler just 90 miles from the finish line, ending any hopes of being on the winners’ podium.  Courtesy Vendee Globe

“These boats are stressful, noisy and life on board is difficult,” said Bestaven after arriving in port. “There is also loneliness sometimes.”

Dahlin, who was given a hero’s welcome on crossing the line first, also spoke of intense “ups and downs” while sailing alone, often hundreds of miles from help, in the world’s most remote oceans. “But it is a magical race,” he added. “It has changed me, I am not sure how yet, but it has. There are so many emotions of such strength—things I have not felt before. It is so strong.”

“I feel like I’m living a dream, hallucinating,” said Bestaven, holding two victory flares over his head after crossing the finish line. “You go from total solitude to this—to this party and these lights. I’m still in my race. It’s a child’s dream.”

Bestaven’s racing yacht was equipped with state-of-the-art foils that lifted the hull above the water to increase speeds.  Courtesy Vendee Globe

The 48-year-old Bestaven—describing his best quality as “stubbornness”—has been ocean racing for 20 years but, like Dahlin, this was his first Vendée Globe. The winners’ podium will consist of Bestaven in first place, Dahlin in second and Burton in third.