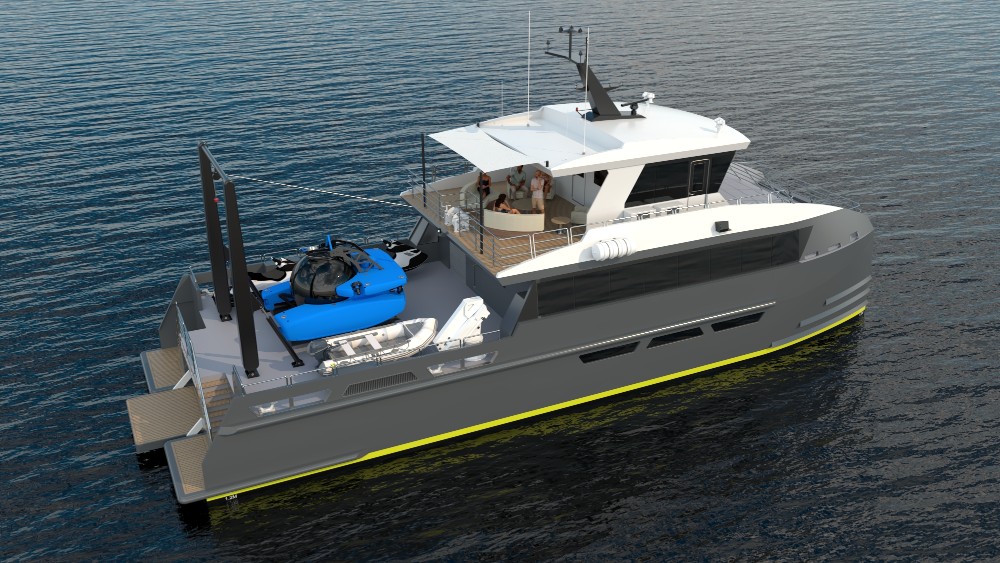 Want to live like Jacques Cousteau but can’t afford the superyacht to carry your sub? Shadowcat today announced a 79-foot catamaran that would serve as a mothership for a deep-diving Triton 3300/3 MKII submersible.

The new Launch and Recovery Craft (LARC), called Shadowlark, could serve as either a support boat for a larger superyacht, or more likely, as a standalone vessel for anyone who wants to go diving in their own submarine, and then use the cat as a primary yacht or research vessel.

The Triton 3330/3 MKII is able to dive to 3,300 feet, carrying a pilot and two guests, for up to 12 hours. The Shadowlark was designed to be able to launch, recover and support this three-seater, or an even larger Triton weighing up to 26,400 pounds. “This is a turnkey solution that was very much a collaboration to create a complete package together,” Robert Smith, founder of Shadowcat, told Robb Report.

While the two vessels are available separately, the manufacturers also gave the package a base price of under $10 million for both. “Before this, there was no market perception of what kind investment it would take to have a package like this,” Smith said.

Triton President Patrick J. Lahey added that the pricing was also aiming at a new demographic. “We can clearly see how this would dramatically increase the potential market of customers to include people that, while very affluent, might find owning a superyacht out of reach financially,” Lahey told Robb Report.

Instead of having to configure a sub for a yacht, Shadowlark designed its boat around the Triton.  Courtesy Shadowcat Boats

The Shadowlark was designed for offshore running. Its 28-ft. beam and 5-ft. draft give it substantial width for comfort and a low draft to reach distant, shallow waters.

The cat’s extra stability also helps its main mission. “It can operate in weather and wave conditions that other vessels cannot,” said Smith. “Of course, the design is to be able to perform her core task, which is to launch and recover Triton submarines quickly and safely.”