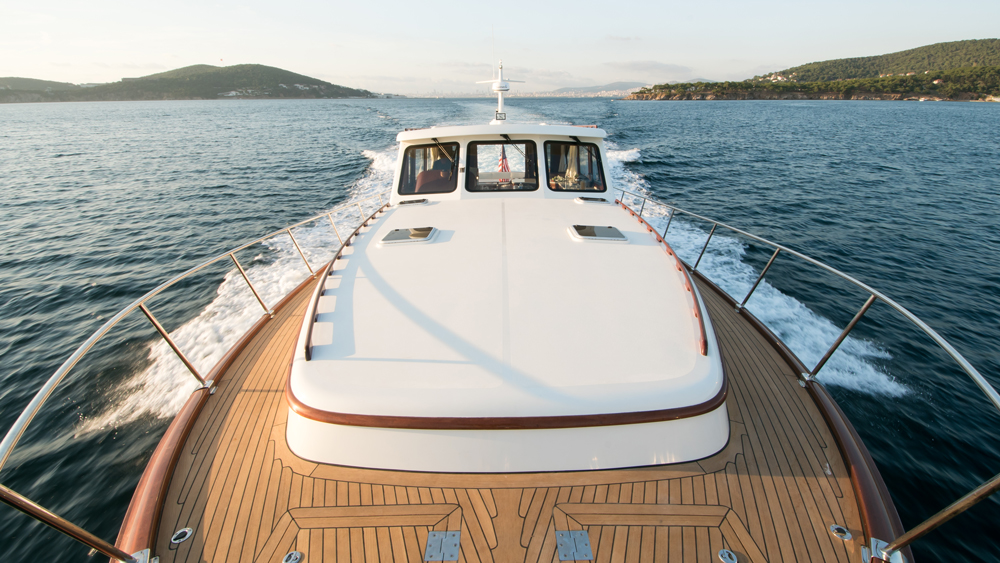 Turkish shipyard Vicem showed off an all new yacht, the Vicem 65 IPS Classic, at the recent Fort Lauderdale International Boat show (check out more yachts we liked at the show). Of course, this is nothing new for Vicem—the shipyard has been in operation for 28 years and has launched 152 hulls before it (such as last year’s V58)—but it is the company’s first motor yacht of this size to be paired with dual Volvo Penta IPS engines. The two pod drives help propel the yacht to a cruising speed of 23 knots or blow past that to its top speed of 26 knots.

The Classic part of the new model is no misnomer; the yacht features vintage touches like dark wood paneling that lend the cabin a timeless elegance. One of the design goals was to make the 62-foot boat’s interior feel more like that of a 70- or 80-foot cruiser, especially when it comes to headroom, which is at least 7 feet high throughout. The main deck salon is equipped with plenty of seating, including an L-shaped couch, and the white accents and upholstery that contrast nicely with the dark wood. The space also includes a small galley and open access to the helm station.

Belowdecks, the owner can choose either a three or four stateroom layout, both featuring a master cabin located toward the bow. Here the owners will get to enjoy another 5 inches of headroom, numerous closets, and an en suite bath. The version being presented at the show had the four stateroom configuration, which was able to accommodate a VIP cabin, a double-twin cabin, and a single-twin cabin.

One feature of Vicem yachts that really make them stand out from the crowd are their unique hull structures, which feature a mahogany wood (sourced from managed forests) core that offers a very high strength-to-weight ratio. The company even says that it helps reduce noise and keeps the boat cooler in the summer. The low weight also means that Vicem can use smaller engines on its boats, though if you’re a power-hungry yachtsman, the 65 IPS Classic can be ordered with more powerful optional engines.

Don’t be upset if you missed this year’s show, we’ve collected all of the major boat shows of the year in one handy place.