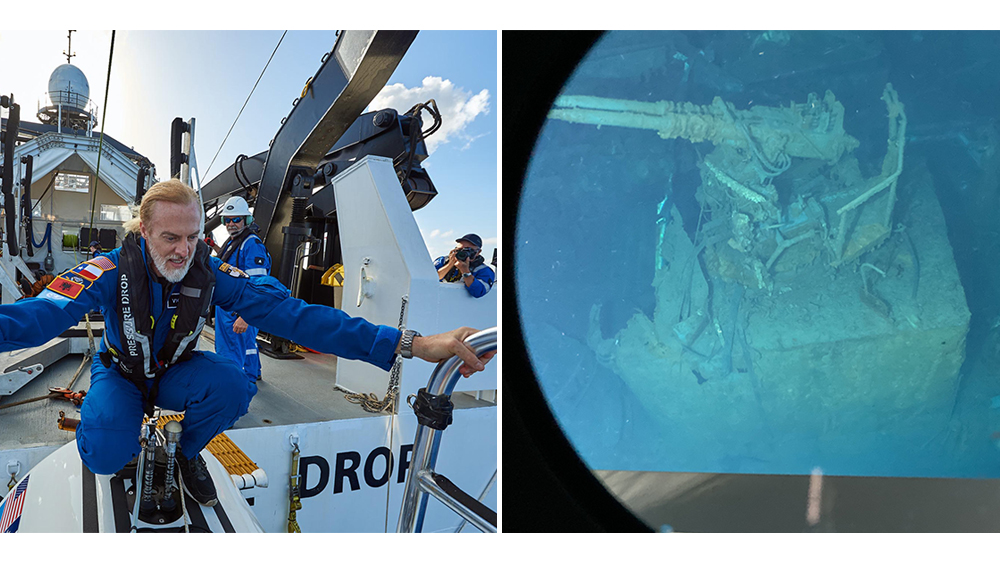 Superyacht owner Victor Vescovo is used to making headlines, but this time it’s personal. On March 31, he piloted his submersible DSV Limiting Factor to the deepest shipwreck dive in history and became the first person to witness the USS Johnson since it sank in a World War II battle off the Philippines in 1944. The retired US Navy Commander, who served in the US Navy for 20 years, elaborated on the dives, telling Robb Report he found the event “emotional.”

“It was a really special dive for me,” Vescovo said, just hours after the event, while still aboard his vessel DSSV Pressure Drop. “The first book I ever checked out of a library was a military history book, so I’ve been steeped in it my whole life. To be the first person to see the wreck of the Johnson was incredibly moving and a real privilege.”

Vescovo privately funded the expedition that successfully relocated, surveyed and filmed the shipwreck at a depth of 21,180 feet. EYOS Expeditions organized the dive. The Johnson, a Navy Fletcher-class destroyer, sank during the Battle of Leyte Gulf against Japanese forces. It is widely cited as the largest naval battle in history. Vescovo was accompanied on the dives by expedition historian, navigator and mission specialist, Parks Stephenson, Lieutenant Commander, US Navy (Ret.) and mission specialist Shane Eigler, senior submarine technician at Triton Submarines. Kelvin Murray, expedition leader at EYOS, was also present.

The wreck was originally discovered in 2019 by the late Paul Allen’s R/V Petrel under the leadership of ocean wreck explorer Robert Kraft. Pieces of the wreckage were filmed by a remotely operated vehicle (ROV), but it has now been discovered that the forward two-thirds of the wreck, including its bow, bridge, and mid-section, lay deeper than the ROV’s rated depth limit of approximately 20,000 feet. In contrast, Vescovo’s Limiting Factor, a Triton 36000/2 Full Ocean Depth submarine, has no operating depth limitation. It doesn’t require a tether to the surface and can hold two occupants for real-time visitation and analysis of wrecks.

“Robert Kraft and the Vulcan group that came here years ago found what they believed was the wreckage,” says Vescovo. “They discovered portions from the aft part of the ship, which were shattered and broken. We expected to see something similar, yet it appears what they filmed was the wreckage that was blown off the ship when it impacted the surface. The forward two thirds of the ship stayed intact and we were able to see all of it.”

The hull number “557” was clearly visible on both sides of its bow, along with two full 5-inch gun turrets, twin torpedo racks and multiple gun mounts in place on the superstructure. No human remains or clothing were seen and nothing was taken from the wreck.

Shane Eigler, Victor Vescovo and Parks Stephenson were all part of the voyage of discovery.  Courtesy EYOS Expeditions

“We saw the bridge and two gun mounts pointed in the same direction where they were firing their last shells at the Japanese destroyers that sank them,” says Vescovo. “It was just extraordinary.”

It took four separate dives to locate and survey the wreck that lies in water 62 percent deeper than the Titanic. “On the first dive, we had analysis of where it should be but we didn’t quite get to it,” says Vescovo. “We had a minor technical problem on the second that caused us to have to abort the dive. But on the third, we actually picked up the wreck on the sub’s sonar and were able to locate it. We spent as much time as we could on the fourth dive filming and taking photos.”

The entire wreck site of the 376-foot vessel occupies a concentrated small area, making it difficult to locate. But the highly maneuverable submersible was able to conduct a thorough survey of the wreck to verify its identity, construct a map of its layout and obtain high-definition imagery that can be used by naval historians.

The USS Johnson‘s forward section was largely intact after being destroyed by Japanese warships in 1944.  Courtesy Eyos Expeditions

“It was very hard to find but once we did, we went up and down the length of it and saw the shell holes from where she was hit according to historical records,” says Vescovo, who held ongoing discussions with Navy Heritage and History Command. “The historical record isn’t clear on which Japanese ships did the most damage to her, but our preliminary analysis indicates she might have taken some of the worst blows from the Imperial Japanese Navy battleship Yamato. It’s only a hypothesis, but it would be an amazing conclusion to confirm that she did take heavy fire from the largest battleship ever constructed. A true David and Goliath story.”

In 2019, following the Five Deeps Expedition, Vescovo became the first person in history to have been to the top of all the world’s continents, both Poles and the bottom of all its oceans.

But there are other voyages ahead. Three other wrecks remain undiscovered from the Battle of Leyte Gulf, and Vescovo is intent on finding them. “One is the aircraft carrier USS Gambier Bay,” he says. “We’ve just started to open the door.”