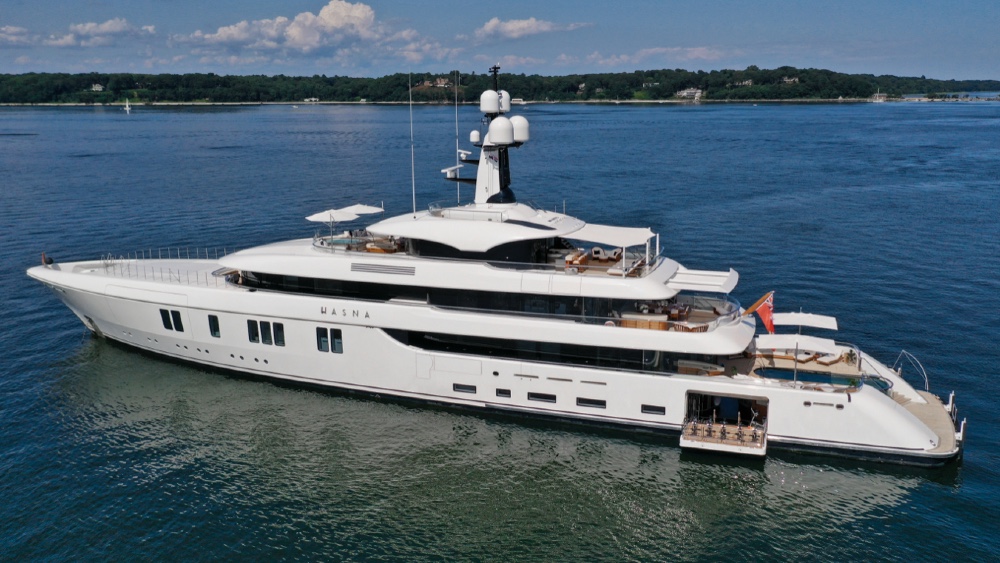 Since Covid-19 forced the world into lockdown, most people’s realities have become virtual. From webinars to Zoom conferences we now communicate online. But can a virtual yacht tour from the comfort of your sofa truly match the inviting sensation of sun-kissed teak under your feet?

Burgess thinks so. The UK brokerage firm had a large existing portfolio of 360 tours prior to the coronavirus outbreak. Having previously sold a yacht to an owner from photographs alone, without the client stepping foot on board before the sale, the company is convinced of the power of virtual access.

“We’ve done a number of these 360 tours for our central-agent yachts,” sales broker Tim Vickers told Robb Report. “In the case of 240-foot Hasna, we sent the captain one of our ‘planet cameras’ and he took all the yacht footage that our digital team put together to create a virtual tour of the yacht.”

The broker selling this Feadship, priced at $100.6 million, hopes to drum up more interest through the virtual tour.  Burgess Yachts

Hasna has been docked in Rybovich superyacht marina in West Palm Beach since March, located in the free trade zone to make her available to US residents. She was set to be Burgess’ flagship yacht for the inaugural Palm Beach Superyacht Experience in March, which was cancelled because of coronavirus.

For the most part, the initial wow factor is not lost. The yacht can’t be viewed from afar, and there is no bouncy aft passarelle to negotiate, but the eye is immediately drawn to an impressive glass-backed, 26-foot pool on the main aft deck. “Pivoting” on the spot reveals a handsome exterior from design studio RWD, responsible for both exterior and interior. There are many sun loungers for relaxing, and a cinema screen setup for the whole family to enjoy starlit movies together. But there are some noticeable absences: The sound and flow of the pool’s dramatic waterfall feature has been muted.

But learning about Hasna‘s intimate details from Vickers lifts the tour to another level.

The virtual tour allows prospective buyers–and tire-kickers–to do a complete tour, but without the ocean breezes.  Burgess Yachts

“It had always been the owner’s dream to build a Feadship,” Vickers says. “He loved every aspect of it, working through the design and following the construction process. He was actively involved, and even had a dedicated project room set up in his home, from which he held build meetings. He knew what he wanted.”

The main saloon is a modern dining area with a customized extended dining table by Silver Lining and double wine fridges with DKT gesso finish. A nine-seater cinema room sits behind. A spiral staircase directly descends to the 614-square-foot beach club, with a view of the light-filled pool above. The beach club is where the virtual experience is most compromised because it doesn’t show what the area is fully capable of. Both fold-down side doors were closed when filmed in port, and with no transom door available the intended connection to the outdoors is completely lost. Being able to stand at the water’s edge with a gentle sea breeze, or doing a workout on the four spin bikes usually set up portside would provide an entirely different experience.

Vickers maintains the real advantage of this technology is that people can get a good feel for the on-board spaces and amenities, without physically having to travel.

The virtual tour was shot in a marina, so it lacks the sensibility of being out at sea.  Burgess Yachts

“In many cases, people might rule a boat out after seeing footage,” he says. “Equally, it might encourage them to make the effort to travel to see the boat. We’re currently talking to a dozen very serious buyers, and the option of a live-streaming tour conducted by the captain has also proven popular.”

The owner’s considerable art collection of bold prints and playful sculptures compensates for areas that can’t be viewed at their best. Artworks of note include a DKT custom crackle gesso column in the main deck corridor that changes from red to blue when approached from different directions, and a Based Upon wall of bronze and glass that stretches the full height of the main staircase, displaying the owner’s Lebanese family heritage. Straw marquetry paneling, fumed eucalyptus flooring and Loro Piana wall fabrics create a luxe interior.

“The owner has had some good cruising on board, spending time in the Caribbean, Mediterranean and most recently New England, but he’s ready to do something new,” says Vickers. “The idea of taking on another project really excites him, and the timing is right for him to start thinking seriously about that.”

Another positive of a virtual tour is that viewers can do it at their own leisure and visit many yachts much faster than if they were at a boat show.  Burgess Yachts

So, does a virtual tour work?

For me, there are key elements to the virtual experience that can’t compare to a live tour. The texture of the velvet walling in the cinema room. The feel of the saddle-leather stair treads with cork base on your feet. The calming aroma of essential oils in the treatment room. Or the sea air on the sun deck, with its white rock crystal back bar, are all inimitable.

None of this phases Vickers.

“We’ve sold boats before based purely on the pictures,” he says. “It does happen, but I think all of those buyers would have preferred to also have had the opportunity to see the boat in a bit more detail, and these 360 tours give people that possibility.”

Hasna is listed through Burgess for $100.6 million.