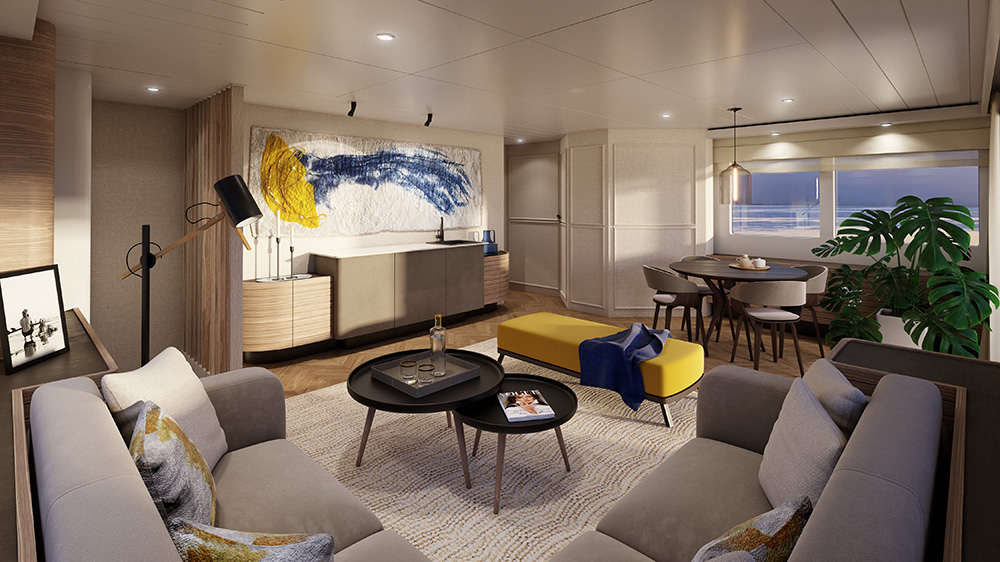 Back in the day, there was a popular television ad for Reese’s Peanut Butter Cups where two hipsters, one eating peanut butter and the other eating chocolate, run into each other. “Hey, you got peanut butter in my chocolate!” shouts one. “Hey, you got chocolate in my peanut butter!” yells the other. They immediately come to see that the unexpected combination is not only a delightful new taste, but ultimately a marriage made in heaven.

In a very different world, Vripack’s recent announcement that it was partnering with Nordhavn felt like a remake of the old commercial. Vripack, one of the most forward-thinking superyacht designers in Europe, teamed up with Nordhavn, a highly respected but very traditional U.S. builder of expedition yachts.

The unlikely combination of cutting-edge designer and classic builder, however, has resulted in an elegant interior for the new Nordhavn 80 that is contemporary, Scandinavian, and more residential than yacht.

Nordhavn has won a number of design awards over the years, including a recent one for the interior of the Nordhavn 96 Lacey Kay in 2017, but the Vripack design is a significant departure from Nordhavn’s classic American designs.

The Dutch firm used the Scandinavian term hygge as its guidepost. The hygge concepts of coziness, comfort, and contentment were turned into reality with the use of muted woods and natural tones across the 80’s interior, along with unfinished teak floors that unite the whole yacht. In the skylounge (shown at top), Vripack employed splashes of daffodil yellow and midnight blue to add bursts of energy.  In the main saloon (above), the furniture in both the formal dining room and lounge area is simple and comfortable. The designers did not use the floor-to-ceiling windows found on many yachts these days, but instead employed large but not oversize residential-looking windows. The wooden stairway along the wall also gives the impression that the interior feels more like a mountain retreat than a yacht.

The sense of comfort extends down into the master stateroom and three other guest suites, and even into the crew cabin for two.

The 80 is a new yacht for Nordhavn, falling between its 76 and the 86. The builder also makes 90- and 100-foot expedition yachts that travel to the world’s most remote destinations.

“Nordhavn’s DNA embodies a design philosophy that is a match with our own ethos of making owners feel at home at sea,” says Bart M. Bouwhuis, Vripack co-owner. “We’re convinced that many exciting projects will emerge in the near future.”