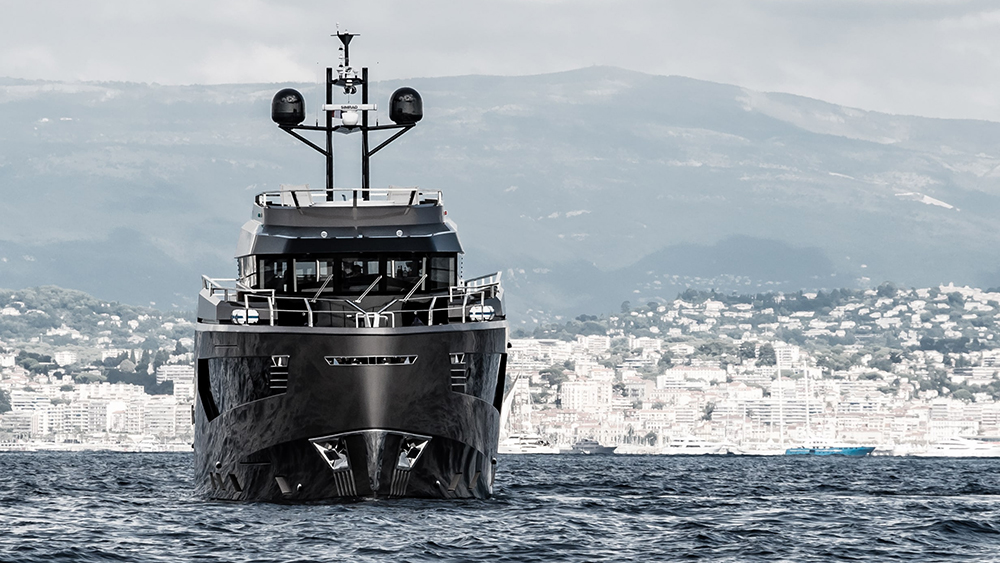 Vripack’s 79-foot explorer yacht, Rock, built at the Evadne shipyard in Turkey, was designed to be the waterborne equivalent of a Land Rover, with a rugged exterior and warm, tactile interior. According to Vripack, Rock has 44 percent more interior space and 49 percent more open space across the exterior compared to other yachts its size. The vertical bow, now common on most explorer yachts, adds to the interior volume in the front section of the yacht.

The Dutch studio worked hard to give the interior an open-plan layout, with clear lines of sight over the water from almost any angle.

“We added a lot of glass on board, with full-height windows that deliver uninterrupted views wherever you are on board,” says designer Robin de Vries. “The dining area features one of the largest glass panels found on board a 24-meter [79-foot] yacht, providing panoramic vistas. While in the owner’s cabin, a private terrace is complemented by a sweeping 180-degree view.”

Vripack used light-colored woods, white walls, and off-white decor across the interior, employing loose furniture in the saloon to give it a studio appearance. A wall in the master suite folds down into a terrace for two, providing arguably the most unencumbered view in any master stateroom. “The family will always be facing the sea,” says De Vries.

The master stateroom and its fold-down terrace.  Photo: Courtesy of Vripack

The yacht also has three other guest cabins and a hot tub on the sundeck. The owner plans to spend weeks at a time cruising aboard the explorer, mostly in the Mediterranean.

Rock has a hot tub on the sundeck.  Photo: Courtesy of Vripack

Rock, with its fast-displacement steel hull and aluminum superstructure, is powered by twin 1,000 hp Caterpillar C12 engines. The yacht can reach a top end of 16 knots, with a friendly cruising speed of 12 knots. The yacht has a range of 3,000 nautical miles.