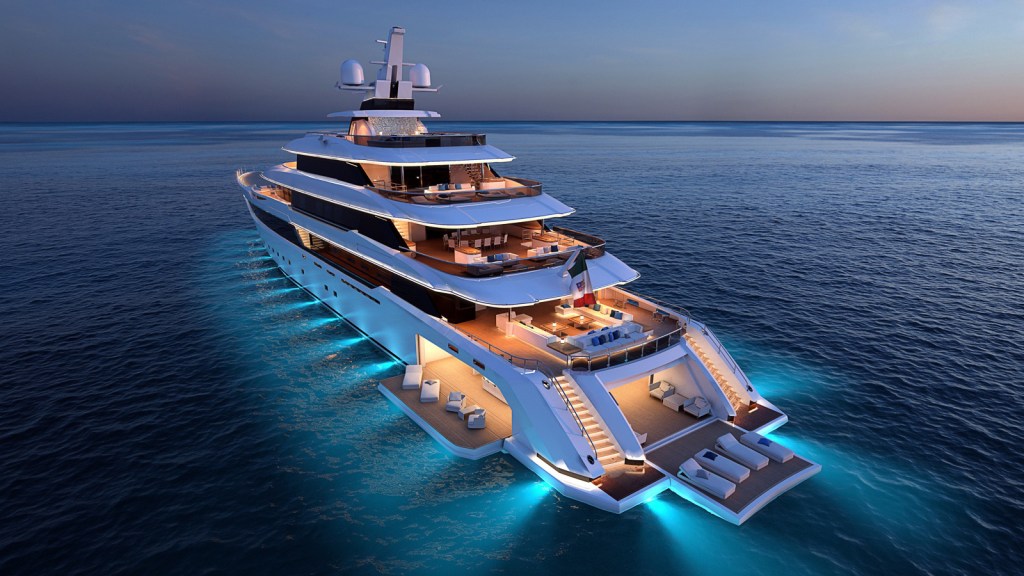 Last week’s launch of the 263-foot motor yacht Dragon was a milestone event for Columbus Yachts. Built at the Palumbo Shipyards in Ancona, Dragon is the largest yacht ever for the Italian brand and the first of its 80-meter Classic series.

It also marks the coming of age Giuseppe Palumbo, who entered the superyacht sector in 2011 with the Columbus brand. Palumbo’s goal was not only to provide a fresh direction for Columbus, but also to establish Palumbo as a major player. Since then, the Palumbo Group has also acquired the ISA and Mondomarine superyacht brands. Launches by Columbus include the hybrid-powered 131-foot Divine and Eleonora 3, the 177-foot Prima and 187-footTaiba.

Those projects, while impressive, pale against the scale and technological complexity of Dragon. Hydro Tec designed the exterior, giving it a svelte, trim and proportional profile, with excellent social areas across the bow, upper deck and stern areas.

The yacht has a 27-foot swimming pool on its sundeck, along with a 2,200-square-foot beach club and spa on the fourth deck. At anchor, Dragon‘s lowest deck also transforms into an on-water party center, with the stern area descending into a rear platform and two side panels fold out to open the entire area.

Dragon’s stern area descends into a rear platform with two side panels that fold out to open the entire area.  Photo: Courtesy of Columbus Yachts

The Francesco Guida interior includes five large and generous guest staterooms on the main deck, and the owner’s apartment on the private deck. The owner’s suite includes a private office, banks of windows that provide a 180-degree view from the bedroom and a special social area where owners can entertain guests outside of Dragon’s many other saloons and exterior spaces.

Dragon has six levels, with a circular glass elevator connecting the lower deck to the sundeck.  Photo: Courtesy of Columbus Yachts

The new yacht, of course, was the hero at the launch, but Palumbo’s new Syncrolift, capable of lifting 3,300 tons, was the cool piece of equipment that made it happen.

The owner plans to take delivery of Dragon after its commissioning, and the yacht will make its debut to the rest of the world in September at the Monaco Yacht Show.