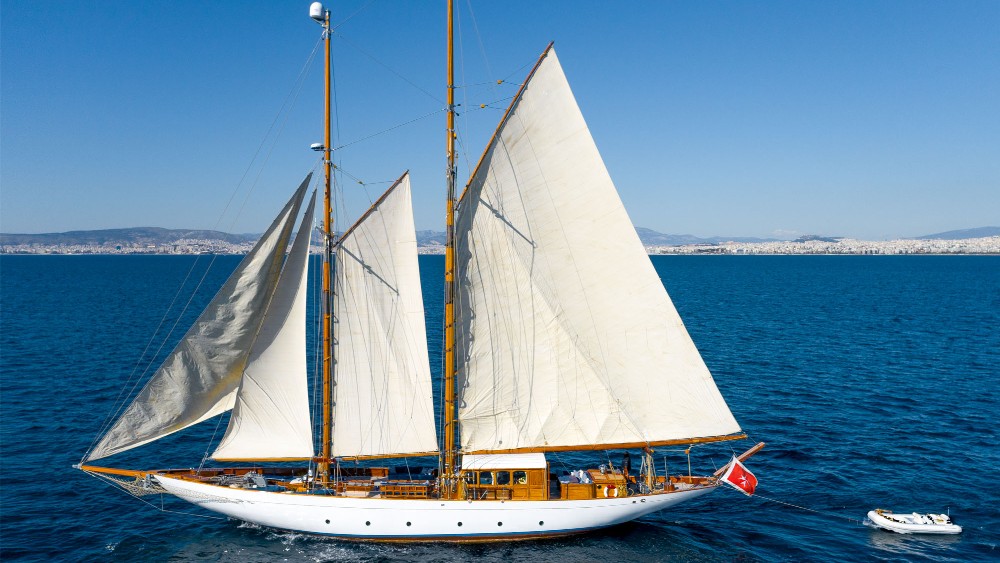 Weather Bird is more than a classic, wooden boat. The 101-foot staysail schooner is a whispering storybook from the 1930s when luminaries like Ernest Hemingway and Cole Porter rubbed shoulders out at sea. Coco Chanel walked her teak decks. Pablo Picasso found inspiration amid the rich varnished woodwork. Louis Armstrong reportedly wrote a song about the yacht and then hid the record deep inside the frames of the wooden hull.

The 90-year-old boat wears her age well, having emerged from a 12-month refit last year with a complete mechanical overhaul. Weather Bird’s current owner bought the yacht 18 months ago. His two previous boats were Tecnomar motoryachts—an 83-footer and a 120-footer, which caught fire in Mykonos. But wooden schooners are his passion, and though the vintage collector has experience renovating classic cars, Weather Bird was his first antique yacht.

After multiple refits, the 90-year-old yacht has kept its original wooden beauty, but the engines, electronics and even the sail systems have been modernized.  Courtesy Northrop & Johnson

For the Greek owner, the experience has been less restoration, more in-depth reconditioning. The Vladimir Orloff-designed oak hull is original, but virtually all else, such as fabrics, lights (made from opaline rather than glass, as per the 1930s) and interior cabinetry are new, albeit in sympathetic Art Deco style. The owner commissioned an artist to create sketches of what Weather Bird would have looked like in her heyday and used these to remain true to the original styling.

“I researched the boat and found magazine articles and books of how the lamps and ceiling lights looked back then,” he told Robb Report. “I also found an 80-year-old carpenter who used to build wooden boats, and he’s overseen much of the styling.”

Louis Armstrong reportedly wrote a song about the yacht and put a record of it deep in the wooden hull.  Courtesy AP

Built in 1931 by Chantiers Navals de Normandie, Weather Bird was a leading superyacht of her day. Her original American owners, high society couple Sara and Gerald Murphy, settled on the French Riviera where they entertained the artist community of 1930s Paris aboard their newly commissioned yacht.

At one point, French painter Fernand Léger used the two-masted schooner as a floating studio, creating a series of watercolor paintings of the vessel. Picasso painted Sara’s portrait seven times. It’s also thought that F. Scott Fitzgerald portrayed the Murphys as the main couple in his novel, Tender is the Night.

“I haven’t been able to verify it, but it’s rumored that Louis Armstrong, who was a friend of Sara Murphy, wrote a song called ‘Weather Bird’ and embedded the first record in the keel of the boat,” said the owner, asking not to be named. “It’s a difficult job to open up the 40-ton keel to check, but it’s written in all the newspapers at the time, so I like to think it’s true.”

The yacht still has the same sail plan, but the winches and furling systems have been modernized for single-person operation from the helm.  Courtesy Northrop & Johnson

The boat has undergone several refits since her launch. The 2021 refit included new engines and generators. All electrical systems have also been upgraded, controlled by a Lutron system that can be operated by a smart phone.

The owner has also added his own touches, such as a fold-out piano in the center of the main salon, near an Art Deco-inspired cocktail bar for Gatsby-like entertainment. A fireplace has been reinstated, this time gas-electric. The main sails are also now electrically operated, meaning the boat can be under sail in a speedy three minutes. “The details nod to the 1930s but it’s modern underneath,” he says.

If the walls could talk: The yacht still has a sense of 1930s style.  Courtesy Northrop & Johnson

Sunbathing happens at the bow. A side boarding ladder allows for easy guest embarkation. Amidships on deck is a cozy seating area. The newly designed cockpit features custom-made electric gauges and switches. It was inspired by Perini Navi’s automated sailing system and means the entire sail plan can be operated by one person. Marble adds a contemporary touch in the guest en suites, as do glass skylights on the lower deck.

The plan for this summer is to sail the Greek islands, taking in Patmos and Hydra before heading to Bodrum in Turkey. With its 14-foot draft the boat will need to anchor outside of the port. This does little to trouble the owner, who has visited the yacht every day since acquiring her to relax on the on-deck sofa. “There is an amazing vibe on board,” he says. “You sense the bygone era and the guests who have passed before.”

A summer fling will have to be enough for the owner, who placed the yacht for sale with Northrop & Johnson at about $4.06 million, with the rather Jay Gatsby-like explanation that he has another big project waiting in the wings.

Here are other views of Weather Bird.