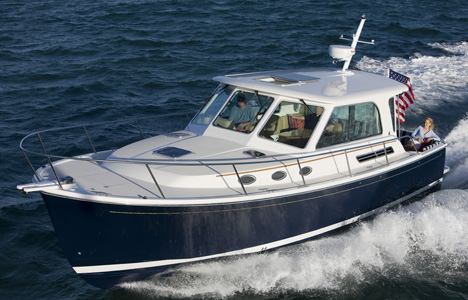 The new Back Cove 37 has the same rugged, handsome looks of its smaller siblings, but the twin-stateroom layout makes it a comfortable cruiser. Sabre, the long-established sailboat and motoryacht builder based in Rockland, Maine, launched its Back Cove Yachts division six years ago as demand for stylish, expensive day boats like the Hinckley Picnic Boat reached fever pitch among buyers who wanted an easy-to-handle but well-built vessel that could be used to explore local waters without overnighting.

Since launching its original 26, Back Cove has evolved with sister boats that include a 29 and 33. Its new Back Cove 37, launched at the Miami International Boat Show in February, has the same down-east lines as its smaller siblings, while also offering owners ease of operation, fairly low maintenance, and seaworthiness. While designed to roam the coastline by day, the two-stateroom layout makes it a comfortable weekend cruiser. Its salty New England good looks are reminiscent of a traditional lobster boat, and include a tall, raised pilothouse, long forefoot, and upturned spoon-shaped bow. It’s a boat that would look good in any harbor from Newfoundland down to Annapolis.