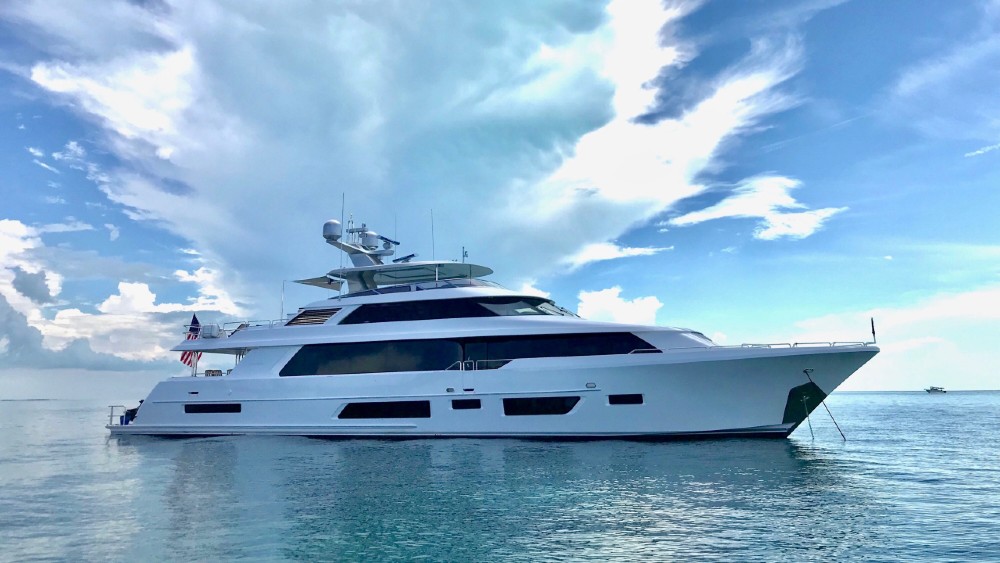 It’s hard to imagine that changing a staircase can transform the interior of a superyacht, but in the case of the Westport 112, it became the turning point in its new design. The American builder’s entry-level boat is arguably the most successful superyacht in the world. Since it was introduced in 1994, 62 112s have been launched and three others are currently in build. No other yacht has had that kind of staying power or popularity among owners.

Therein lies a dilemma. Changing a superyacht’s look after a long, successful run can be a tricky proposition. But times change, designs come and go, and what was popular in 1994 can seem dated. Fortunately for Westport, American yacht owners tend to be relatively traditional in their tastes. That is, until recently.

“We had potential customers coming up to us with brochures from European builders, asking if we could do this or that with our design,” Alex Rogers, sales director of Westport Yachts, told Robb Report on a recent tour of Book Ends, the latest 112 to hit the water. “It made us rethink the entire design.”

The new interior includes murals to add an element of whimsy to hallways that are typically utilitarian.  Courtesy Westport Yachts

Sylvia Bolton, Westport’s in-house designer, sees the design shift in even stronger terms: “Book Ends is as different as it can be from the last generation without actually changing the layout.”

Westport’s naval architects added larger exterior windows, replacing the rows of portholes along the hull and the main windows in the superstructure, adding three inches to enhance natural light. That gave the exterior a more contemporary look. Bolton decided to go full monty with the interior, without changing the internal structure. Moving bulkheads and shifting spaces can be an expensive, complicated process, especially for a company that built its business model on an assembly-line process where changes translated to big costs for the owner. Besides, the 112’s hull has proven its worth for 27 years.

So, Bolton started with the staircase. “Originally it was a circular staircase with two radiuses extended into the hallway,” she says. “We changed it to a straight staircase. It was amazing how much it opened up that space.”

The country kitchen on the 112 is a favorite gathering point for owners, guests and crew, so the design included a flowing piece of marble on the island and large-screen televisions to add luxury to the galley’s inherent sociability.  Courtesy Westport Yachts

Opening space across the interior was a key goal, so Bolton focused on simple things like straightening corners and removing wide cabinets that had been part of the 112’s layout for years. She also modernized the interior with new surfaces, stones and even wall sculptures.

A pair of life-sized reef sharks, extended on a hallway wall, seem to be swimming in a dark-blue coral reef. At the bottom of the stairway on the lower deck is a wall-sized photo of a school of reef fish. Sand dollars on the main salon wall also became part of the new standard design.

“I really like blue and started thinking about sea life,” Bolton says. “I thought it would make a good theme, and most times, clients resonate with them. We also make everything easily removable in case the client doesn’t like it.”

The life-sized reef shark sculptures on the wall show some of the fine design touches of the new 112.  Courtesy Westport Yachts

The owner of Book Ends came into the build process late, so he had little choice over the big features in the interior. But he must’ve liked Bolton’s design, because the only thing that changed were the big sand dollars in the salon, which were replaced with bright, colored glass spheres.

The last 112 I’d been on was about ten years ago, and boy, talk about a sea change. Instead of what I remembered as somewhat dated traditional American design, the 112 now had features like leather-covered handles on doors and drawers, a rich Rousseau finish on the oak walls (where the grain runs horizontally) and lots of natural light.

The two areas I liked best weren’t the main salon or main suite, both open and spacious, but the country kitchen and pilot house. Open kitchens have been one of Westport’s hallmarks over the years, showing the difference between European and American owners. Europeans tend to like small galleys where staff are confined to make meals, but the Americans use the kitchen much as they do at home, as social gathering points for owner, guests and crew.

Sweeping marble in the main suite displays the level of quality across the yacht.  John Cantu/Westport

Bolton worked within the same layout as previous 112s, but modernized it with new colors and materials, including a beautiful piece of marble that flowed over one side of the galley’s center island and extended to the floor. It was clearly the room’s centerpiece. “Stone is something that we pay particular attention to,” says Bolton. “It’s an accent that can make or break a space. It can take several months to find the right piece, and the right stone can even make you change a design to accommodate it.”

The Calacatta marble down in the main suite’s bath and shower was also exceptional, a flowing, soft-grained stone that filled the space with a subtle luxury.  The main bedroom was nice, but the marble ensuite made it extraordinary.

Seeing this new interior changed another perception I’d had about Westports—that the quality wasn’t as strong as some of the brand’s competitors. But I’d confused myself by comparing Westport’s older interiors with more modern European designs. Looking at Book Ends, I could see that the materials—and craftsmanship—were as strong as the European builders, and in some cases, better. It just took a new design to showcase it.

The exterior cockpit area has the same sense of open space as the adjoining salon.  Courtesy Westport Yachts

My favorite spot on the 112 was the pilothouse, another large social area, with lounges and big windows surrounding the helm chair and navigation console.

Bolton added subtle touches here by lowering the height of a side lounge to allow more natural light below, while adding a school of swimming fish on the rear wall’s Lucite surface. “Lucite tends be clear during the daylight hours, so you don’t really see the mural,” she says. “But at night, it becomes vivid, and the reflects off the windows as well, so it feels like you’re surrounded by fish.”

The designer used Lucite beneath the stairs to the sky-deck to deliver a floating feel between stairs. “To me, the qualities of the materials are important,” she says. “Each can provide a different finish with a tactile quality that is also important visually. It adds to the boat’s overall feel.”

The new exterior includes larger windows along the superstructure and in the hull sides.  Courtesy Westport Yachts

While Book Ends represents the new generation of Westport 112s, it’s just the start. Westport is working on another 112 now where the owners, concerned about sustainability, do not want any material that is not manufactured or recycled—in other words, no leathers, original woods or natural marble. Talk about a sea change.