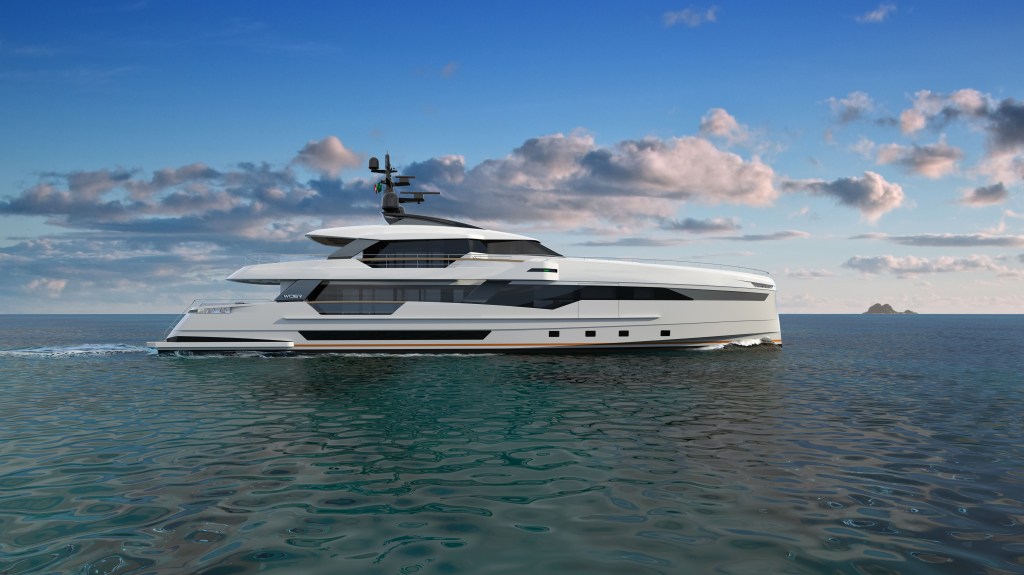 When Wider launched the 150-foot Bartali several years ago, the Italian brand proved that motor yachts could be designed around function, rather than simply focusing on form. In Wider’s case, the functions included one of the most fuel-efficient propulsion systems in the yachting world, an unbelievable amount of usable deck space for owners and guests, and wide-open saloons and staterooms.

Last year, Wider launched Bartali’s bigger sibling, the 165 Cecilia, and is now building a new 130 at its facility in Ancona. The 130 should be launched next summer.

Like its sisterships, the Wider 130 lives up to its name, with a 27-foot 7-inch beam that helped the designers create more than 2,300 square feet of usable deck space, square footage typically found on larger yachts. The three zones include a wide-open foredeck for sunning and privacy, an aft bridge deck for dining and social gatherings, and the transom beach club, which opens to the sea.

Wider’s diesel-electric propulsion is positioned amidships, rather than at the stern like most other yachts. No engines in back let the designers expand the beach club, turning it into a serious relaxation space on the water, instead of a nook or tender garage. The 130’s garage is forward, rather than at the stern, able to accommodate a 16-foot tender and two jet skis. The diesel-electric engines are 20-percent more fuel efficient than conventional diesels, with fuel consumption of only 22 gallons per hour at 10 knots. At the same speed, the 130 has a range of 3,400 nautical miles. The Wider can also run on battery power for up to six hours. No engine vibration or diesel fumes, just the waves gently lapping against the hull, is like living aboard a 19th-century sailing yacht, but with access to all modern conveniences.

The center placement of the diesel-electric engines also means that the guest cabins have gained extra space aft. The full-beam master suite forward is palatial for a 130-foot yacht, with an opening terrace where the owners can enjoy a private meal or simply stare at the night sky.

The saloon, with its floor-to-ceiling windows and 6-foot 11-inch headroom, is also unusually large. It gets bathed in natural light, and with bulwarks that drop along the sides, the views are exceptional.

The 915-square-foot skylounge on the top bridge is yet another large gathering area, a space that invites the outdoors inside through the full-height glass doors.

“A lot of thought has gone into every detail of its layout,” says Michele Lubrano, head of design at Wider. “We provide spacious areas for guests that flow well from one space to the next, but we also designed the yacht so the crew could work efficiently and discreetly through special passageways.” The Wider 130 has quarters for its captain and six crew members.