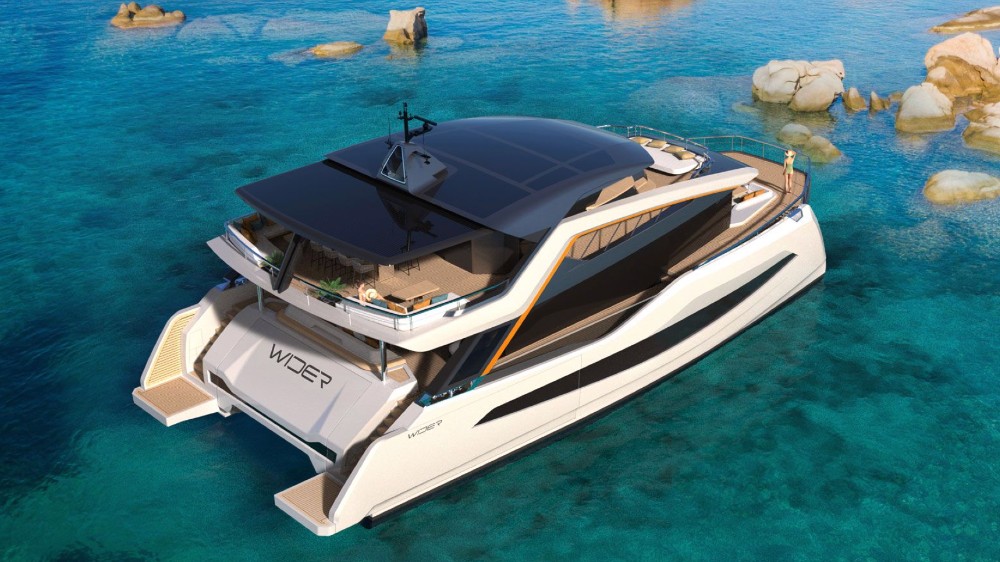 Wider Yachts, which started the trend of fold-out platforms for yachts, is moving into the power catamaran field, with the launch of a new 92-footer. The Italian yard said that it worked with studio Luca Dini on the interior and exterior designs.

Wider recently announced that it had purchased a shipyard in Fano, Italy. CEO Marcello Maggi said the first 92 would be launched in January 2023. Five units are under construction.

“Making a 92-foot catamaran look beautiful was quite a challenge,” said Maggi in a statement. “So we worked with the designer Luca Dini to make this boat look very smooth and thin.”

The stern, with foldout platforms, shows how Wider got its name.  Courtesy Wider Yachts

The RINA-classed yacht will have a beam of about 39 feet, which is about the same size as the 80-foot power cat from competitor Sunreef.

But the Wider, living up to its name, will have the advantage of expandable side decks. The 720-square foot beach club at the stern, for instance, has foldout balconies that increase the size. Several of the staterooms also connect to the swim platforms.

The designers at Luca Dini chose a contemporary palette for the colors, using open space in the salon that takes advantage of the wide beam. Features like a Teppanyaki grill in the dining area as well as alfresco lounges for eating outdoors are designed to meld the interior and exterior spaces.

The four-stateroom layout can accommodate eight guests, and there are crew quarters for four. Wider is offering the option of a five-cabin design for yachts headed to the charter market. An outdoor Jacuzzi and tender garage that accommodates both a 15-foot tender and personal watercraft are also part of the design.

Wider embraced sustainability before most other yacht builders, incorporating a hybrid diesel-electric engine in its first superyacht. It also announced plans to build a yacht with a hydrogen fuel cell. This 92 will have solar panels and battery packs that allow zero-emissions, silent cruising. The boat will have a top speed of 15 knots and range of 3,000 nautical miles at eight knots.