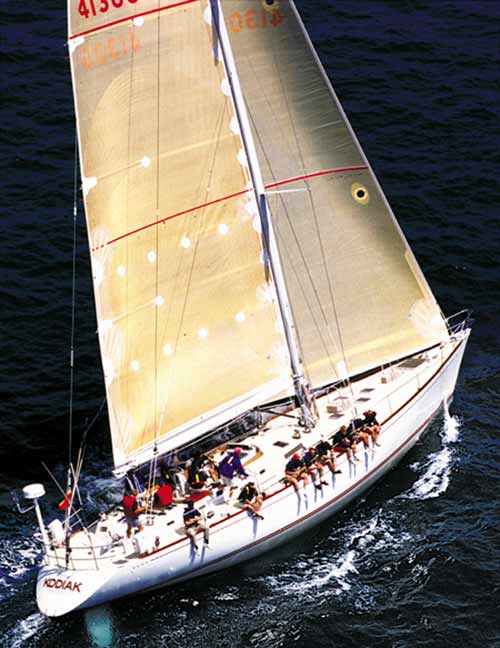 The Cruising Club of America, one of the world’s most exclusive yacht clubs, has no trophy room, no dining room, no marina, no docks—and no clubhouse. Rothschilds, DuPonts, Kelloggs, the Browns of Brown University, the Adamses of Raytheon, and the Watsons of IBM have all been members, but annual dues are only $125, and arriving at a club cruise in a megayacht would be unthinkable.

Money, connections, and the size of your yacht will get you nowhere if you want to become one of the club’s 1,100 members. The club is a collection of hands-on sailors who gained membership and kept it by their nautical achievements—such as completing transatlantic voyages and rescuing shipwrecked sailors—that would floor an average boater. “It’s the sport of the thing,” says one member. “There’s no reward like steering my boat safely into a distant harbor. The toughest ocean passages are like merit badges: You have to earn them.”

Members join the Cruising Club of America not simply because they want to, but because they can. According to the club’s credo, membership itself is a mark of achievement. In 1961, 86 Cruising Club members sailed in their yachts from Boston to Nova Scotia’s Bras d’Or lakes. They endured a week of frigid sailing, watching for icebergs along the way. During the cruise, Blunt White, the club’s commodore at the time, came across an overturned skiff in the freezing water and rescued the two fishermen who were clinging to the boat’s hull.

Another member, who was old and ill, was warned by his doctors not to participate in a club cruise. The trip, his doctors said, would kill him. He went anyway. One night, midway through the cruise, he mixed drinks for his friends, said goodnight, and died in his sleep. The next morning, his club fellows paid their respects, hired two lobstermen to take his body ashore, and sailed on their way—just as their departed mate would have wanted.

The members’ machismo does not translate into contempt for casual boaters. Rather, they feel pity for yacht owners who always hire captains and crews to run their yachts. In a Cruising Club member’s mind, you miss the essence of cruising if all you’ve ever done is relax in the salon while your captain pilots the yacht. “If you are going to hire a captain,” says one member, “you might as well stay home and read about it. It’s the difference between buying a cake and baking it.”

William Washburn Nutting, a World War I subchaser, founded the Cruising Club of America in 1921. That year, Nutting sailed his ketch Typhoon from the United States to England, where he met members of the Royal Cruising Club. The British organization promoted hands-on sailing, long voyages, and the advancement of traditional nautical skills.

Nutting and his American yachting friends were disenchanted with the trend toward bigger but not necessarily more seaworthy boats. They were even less impressed with the new breed of yachtsman who voyaged no farther than the yacht club bar. Inspired by the Royal Cruising Club, Nutting set sail back across the Atlantic for home. However, Typhoon ran into a storm that shredded her sails, smashed her cabin, and tossed a crewmate overboard. The vessel listed into New York Harbor, and Nutting tied her up at the New York Yacht Club pier, where, as the story goes, he emptied two bottles of Spanish brandy and proposed the formation of the Cruising Club of America.

Three years later, while attempting a northern passage off Greenland, Nutting was killed when he was crushed by falling ice, but the club’s first commodore had already established the foundation for today’s boat-savvy clique. The club charter that he wrote mandates its members to “refuse stoutly to accumulate an onshore contingent” and to “stimulate the production of fast, comfortable boats for long-distance, offshore work.”

While not all current members are as dedicated to adventurous journeying as their founder was, a good number have conquered challenging cruises. Bill Rothschild, a former club commodore, recalls a club dinner where roughly 10 members sat at each table. For fun, he asked how many members had completed a transatlantic voyage, a venture that requires months of planning and weeks of execution, often through rough seas. About three members at each table raised their hands.

There are some members, however, who rival Nutting’s zeal for offshore cruising. The Cruising Club’s most prestigious honor is the Blue Water Medal, which is awarded annually to sailors who provide meritorious examples of seamanship. Frederick Ames won the Blue Water Medal in 1929, when he sailed east to west—into the wind—across the North Atlantic. The crossing took Ames 58 days and included a collision with a freighter. In 1956, Beryl and Miles Smeeton made three attempts in Tzu Hang, their 46-foot wooden ketch, to round Africa’s Cape of Good Hope. The first two times they were pitchpoled (rolled head over heels) and dismasted. On their third attempt, they rounded the horn in 14 days, inspiring Miles to write Once Is Enough (International Marine, 2001), based on the adventure, and the Smeetons received the Blue Water Medal 17 years later in 1973. In 1985, Marvin Creamer won the medal after completing two transatlantic passages and a world circumnavigation—without instruments.

To gain entrance to the club, you do not need a résumé worthy of a Blue Water Medal winner, but you must have proof of achievements that fit the club charter. You must have completed an ocean passage, such as a transatlantic cruise, while in command of your vessel. You must also be nominated by one member, seconded by two more members, and endorsed in writing by three more members.

One member, with years of voyaging and thousands of miles under the keel of his oceangoing cutter, recalls his audition for the club—which he didn’t even realize was taking place. One day, his sailing friends invited him out for a day of cruising. When he arrived at the dock, he was surprised to see them standing by an 18-foot dinghy, a mere training boat for beginning sailors. His friends asked him to steer the small boat, and he did, although he was puzzled by the request. After the short cruise, his friends asked him for his logs, which he handed over. They examined his records, then invited him to join the Cruising Club of America. That’s how many of today’s members gained admission—the club seeks you out, not the other way around.

Sailing prowess is not the only requirement for membership. One of the questions club members ask when they consider someone for admission is, “Would you enjoy the company of the candidate, glass in hand, in the cabin of a small yacht?” (Neptune knows there is no personality crucible like a small boat at sea.) “One of the real qualifications for Cruising Club membership is that one should be able to say, ‘I rather like him,’ ” says Rothschild.

A Cruising Club member once took a prospect with him on a cruise to Nassau, and the candidate was seasick the entire way. But as soon as they arrived safely dockside, the candidate jumped ashore and acted as if he had skippered the entire passage. “No blowhards,” says one member. “The Cruising Club is for gentlemen and gentlewomen who know about sailing.”

The club’s exclusivity and its hands-on cruising requirement have created a concern. Despite the club adage that members never resign and seldom die, there is worry that the club’s membership could dwindle. Jim Harvie, the 2001 commodore and the owner of a 36-foot Hinckley yawl, cites a study that Cruising Club members tend to live longer than the general population. That’s the good news—salt air apparently does the trick—but the bad news is that the average member is in his 60s. (Last year, five members were given 50-year membership awards.)

Bringing aboard young members is difficult, not because they don’t want to join, but because there are few younger sailors who find the time to meet the membership criteria. To solve this problem, Cruising Club members are recruiting their children and grandchildren, encouraging them to participate in events such as the 730-mile Newport Bermuda Race (scheduled for June 14), which the Cruising Club sponsors.

They want to provide a link from the club’s next generation to its founders, such as Nutting and Henry A. Wise Wood, who would be proud of the club’s history and current status, and would undoubtedly want its tradition to continue. “By gathering into a group all who are fond of offshore work, we sow the wilderness of the sea with a host of acquaintances,” Wood wrote. “And we convert the winter into a season of sport, wherein those who have been afloat swap their adventures with each other, and share them with their unfortunate shorebound clubfellows.”