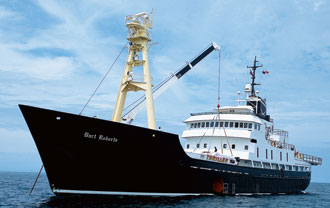 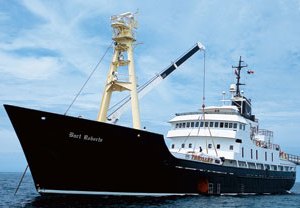 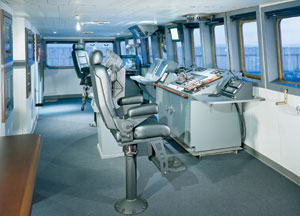 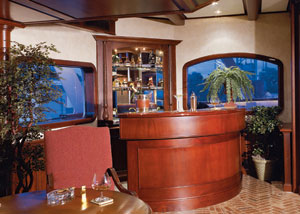 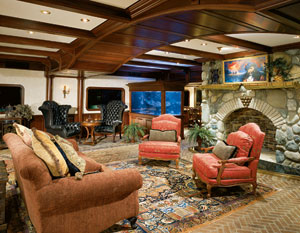 As she sidestepped shards of steel and gnarled clumps of wiring, Karen Bamford applauded herself for choosing blue jeans over a business suit on that day three years ago, in Victoria, British Columbia. The interior designer was tiptoeing through the hull of the CCGS Narwhal, a retired Canadian Coast Guard cutter that Florida businessman Arnie Gemino had recently purchased.

During Bamford’s visit, Gemino’s team of tradesmen was busy extracting 300 tons of steel from Narwhal’s interior. Although piles of twisted steel and winches were all that were visible that day, Gemino’s vision was clear: He saw this former icebreaker, which used to perform search-and-rescue missions off the coast of northern Canada, being transformed into Bart Roberts, a 265-foot, 20-passenger luxury yacht with an over-the-top pirate-themed decor that would make its namesake feel at home.

Bamford and more than 100 tradesmen led by Lennart Edstrom, the vessel’s project manager, were entrusted with the job. Gemino gave them a year to complete the conversion, a deadline that required around-the-clock work, a high-risk design-and-build strategy, a change of residence for Gemino, and some last-minute scrambling to prepare the boat for its unveiling. “There was all kinds of clutter,” says Bamford, recalling her initial encounter with the boat. “It didn’t have any floors in it. But I never doubted that Arnie would achieve what he envisioned.”

For some time, Gemino had been seeking a vessel that met four criteria: It had to be shorter than 200 feet, require a minimal crew, be designed with a shallow draft, and be capable of being converted into a floating home. In 2000, he saw an advertisement in a commercial marine periodical for the government-sponsored sale of Narwhal, an icebreaker that carried a crew of 45 to 120 and performed duties such as ferrying supplies to lighthouses and housing a laboratory for marine studies. Narwhal fell short of two of his requirements—it was too large and needed too many crew members—but Gemino nevertheless placed a bid.

Gemino, who is president of Tradepower International, a marine and aviation services company, had several reasons for coveting Narwhal. First, he recognized the growing popularity of expedition yachts, which are rugged vessels designed for long-distance cruising in substandard conditions such as those found off the coast of Alaska and the Arctic. “You will definitely see more and more of them,” Gemino predicts. “I think people today are becoming a little more adventurous. They like the idea of having capabilities with their yachts that no one else has.”

Second, he believed that refitting an existing vessel would grant him freedom, control, flexibility, and savings unmatched by any other option. By purchasing an existing vessel, Gemino could enjoy the boat in little more than a year instead of waiting the several years that it would take to build a new one. Also, by managing the project himself, he could make changes at costs that would be less expensive than if he had contracted a shipyard to complete the refit.

However, the project stalled before it began. In late 2000, the Russian government outbid Gemino for Narwhal. A month later, Gemino learned that the Russian deal had fallen through and that he was welcome to enter another bid. This time he won. (Gemino declines to reveal the amount of his bid.) Struck by the enormity of his acquisition, Gemino’s first urge was to find the nearest bar. “I had mixed emotions,” Gemino acknowledges. “I knew it was going to be a big project. I had no idea how big it would be.”

He hired Edstrom, a naval architect who had consulted for the Canadian Coast Guard and worked on commercial ships, passenger vessels, and oil rigs in Texas, Europe, and Japan. Having previously worked on a project that involved cutting a supertanker in half and adding 200 feet to the hull, Edstrom embraced the challenge that Gemino presented to him. “For me, it’s not all that hard,” Edstrom says. “I’ve done this all my life. If you’ve done projects all your life, it’s like a dance: You know the tune, and you know how the end will be.”

Narwhal’s excellent condition simplified Edstrom’s task. In 1963, Canadian Vickers, one of the country’s largest corporations, built the boat to serve as an icebreaker and supply vessel. In 1986, Narwhal underwent a $20 million (Canadian) refit that met the requirements of Lloyd’s Register, an international organization that establishes safety codes. By bringing it up to Lloyd’s specifications, the government increased its worthiness as a search-and-rescue boat. Upon acquiring Narwhal, Gemino claimed 40 file cabinets crammed with the boat’s design sketches and blueprints, which also aided in the refit. “Everything was documented from the day it was built,” Gemino says. “It was in good shape. It was a good, solid vessel. With a ton of money and the right personnel, you could turn it into a passenger ship.”

While Edstrom was confident that he could complete the project, one of Gemino’s requirements did give him pause: The owner insisted that Bart Roberts comply with Safety of Life at Sea (SOLAS) regulations, the same requirements that international cruise ships must meet. If Bart Roberts complied with SOLAS standards, the strictest in the world, it would increase its value and enable Gemino to sell travel on the yacht by the cabin. But the boat would have to feature fire-retardant materials and items that, if they caught fire, would produce the least amount of noxious gases. “He wanted it to look like a yacht but still met SOLAS passenger vessel codes, and it’s not that simple,” says Edstrom.

Neither was the method that Gemino and Edstrom chose for the refit of Bart Roberts. Traditionally, a naval architect will design every aspect of a vessel before construction begins. Gemino, who has owned more than 50 boats in his lifetime, preferred a seat-of-the-pants approach in which he and Edstrom designed Bart as their welders touched tools to the boat’s steel. Barring any glitches, the team could conceivably shave a year off the standard construction schedule, saving money as well as time. However, this fast-track strategy was rife with potential hazards. Edstrom could not make full weight estimates or determine the boat’s precise center of gravity until well into construction. He filed drawings with Lloyd’s while continuing the design process, presuming that the organization would approve his work. If the drawings were not approved, the team would have to start over.

“You can paint yourself into a corner,” Edstrom says. “You can win probably a year in completion time, but you take some risks.”

Gemino, who scribbled his drawings on scrap paper, would have it no other way. Steel extraction began, he says, “so I could see better. It was easier to think it through with the big winches out of my way.” After the team cleared Narwhal’s existing foredeck, Edstrom focused on Bart Roberts’ future centerpiece: the saloon. He gutted the crew quarters and raised the ceiling two and a half feet by eliminating steel bulkheads and installing beams. The ceiling also had to be stabilized to support a helicopter pad that would be located on top of the saloon. Tradesmen laid down brick for the saloon’s floor and brought in 14 tons of stone to complete the room’s working fireplace.

While the saloon neared completion, the yacht’s 10 staterooms also began to take shape, as did Bart’s theater, dining room, and gym—though the workers were always prepared for changes to the plans. One day, as workers were installing a balcony in front of a stateroom, Gemino pulled aside the lead welder and told him to cut off the balcony and lower it by half a foot. “It cost me $300 to $500 worth of labor,” says Gemino. “With a shipyard, that would have cost me $5,000. I’m sure that during the project, I made a thousand changes like that myself.”

The redesign, gutting, and conversion represented only portions of the job. To complete the transformation, Gemino would need additional help that he did not anticipate.

In early 2001, Karen Bamford answered the phone at Jordans, a furniture dealer in Victoria where she was working. On the other end was a crazed-sounding man looking for pieces that would fit the pirate theme he planned for the decor of this yacht. Bamford, while puzzled, offered suggestions on some furniture lines. Fifteen minutes after she hung up the phone, Gemino walked in the door.

Well before Gemino first found Narwhal, he had decided to transform a boat into a pirate ship, albeit a luxury vessel that eschewed planks and rum barrels for a swimming pool, Jacuzzis, and a helicopter pad. He had enjoyed watching pirate movies as a child, and as an adult he read about Bart Roberts, Henry Morgan, and Edward “Blackbeard” Teach, pirates who sailed the seas, terrorizing and pillaging other vessels. For the future Bart Roberts, Gemino wanted a boat brash enough to suit its namesake.

After speaking with Bamford (“I mentioned pirates, and her eyes got twice their size,” Gemino recalls), he knew he had found the person who would help him achieve his vision. Initially, he hired Bamford, a textiles and design specialist, to supply furniture for Bart Roberts. However, her duties expanded until she became the yacht’s interior designer, juggling her full-time Jordans job at the same time. She visited Bart before and after work and during her lunch hours.

Pirate ships of yore were design melting pots. A chest seized from a Spanish galleon might stand next to an end table pilfered from an English frigate. Gemino and Bamford agreed that historical accuracy mandated they take a similar approach to furnishing Bart Roberts. Hence, they assembled an incongruous collection of high-end pieces—including items such as Jacobean end chairs and a bronze spike from a shipwreck off the coast of Africa.

While Bamford purchased new furniture, Gemino browsed antiques shops, attended auctions, and collected pieces from around the world. He met an antiques dealer who used to be a bodyguard for the Shah of Iran. The dealer owned a carpet woven with blues, golds, and burgundies that once adorned the floor of a royal palace, and Gemino purchased the item to serve as the focal point of the saloon. In the guest staterooms, each of which feature a portrait of a different pirate, Bamford played off the colors of the artwork and the personality of each bandit; in the Blackbeard room, Bamford selected dark slate for the floor, which complements the black bathroom fixtures and leather-lined bed Gemino had acquired.

As the date of the unveiling approached, the team scrambled toward the finish. Bamford hired an assistant to purchase sundry items such as towels and soap for the boat, although details still fell through the cracks. Several days before the unveiling, Bamford realized that the boat did not have any coat hangers, irons, or ironing boards, a situation she remedied with a late-night shopping binge. Says Bamford, “I didn’t have a personal life for six months.”

In the summer of 2002, Gemino hosted a cocktail party aboard Bart Roberts to celebrate its completion. Former Narwhal crew members were among the guests, and as they toured the saloon, they could not believe that this same space had once housed their cabins.

As of late last year, Gemino was in negotiations to sell Bart Roberts to a private owner for around $30 million. If the sale did not take place, he was planning to cruise aboard Bart in the Bahamas for the winter, then relocate the yacht to the Galápagos Islands, where it would serve as a springtime charter vessel. He was also considering selling fractional shares of the yacht.

Regardless of Bart’sfate, Gemino is already thinking about another refit, perhaps managing such a project for a client. “What he started with and the end result are just miles apart,” says Bamford. “He basically turned a pile of metal into a luxury yacht. It’s like Cinderella.”