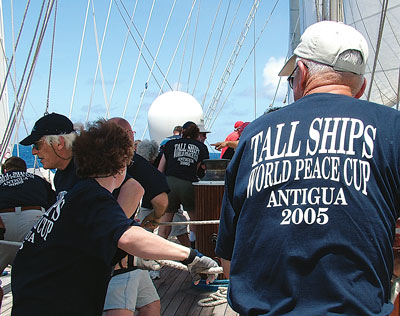 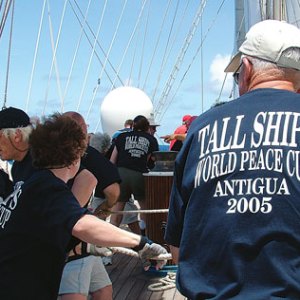 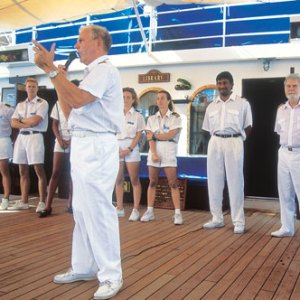 Prowling the deck of Star Clipper, Gary Robbins calls for volunteers to raise a sail on one of the 360-foot vessel’s four masts. Robbins’ round-lensed eyeglasses and brunet hair lend an owlish appearance to his face, but his voice is as powerful and authoritative as the roar of a lion. Like most of the rest of the crew, the stout 54-year-old is dressed in a T-shirt and shorts—proper attire for the Caribbean during the hottest part of an April day—and he wears a pink baseball cap that marks him as a mast captain. As such, Robbins directs the maneuvers involving one of the ship’s masts. More than a dozen other crew members, most of whom are wearing navy blue T-shirts with the words “Tall Ships World Peace Cup Antigua 2005” printed in white on the back, instantly fulfill Robbins’ request by grasping a rope. On their shirts, many of the crew have buttons that show the laughing face of a white-haired older man superimposed on a photo of a tall ship under sail.

“We want you on opposite sides of the line,” Robbins says before taking hold of the rope himself and calling out, “Yo! Ho! Yo! Ho!” to help the team establish a rhythm. Aging backs stiffen and arms ache while the sail leaps another few feet skyward with every “Yo!” and “Ho!” An accordionist—clad in a pirate costume that includes the aforementioned button pinned to the kerchief covering his head—urges on the volunteers by pressing his instrument in time with their grunts. “More, more, together,” Robbins counsels before finally raising both hands above his head and crying, “Drop the line!” When the rope falls to the deck with a thud, a few of the volunteers consider doing the same. “Get your wind, we got fisherman coming,” says Robbins, referring to the sail known as a fisherman, which will be hoisted next. Robbins is a radiologist from upstate New York; neither he nor his wife, Marcia, a homemaker, owns a sailboat.

Manning the ship’s wheel throughout the exercise is Klaus Krosanke, a slim, tanned Hamburg, Germany, native with 30 years of sailing experience. On this day he and his wife, Gabriella Schäfer, are celebrating their second wedding anniversary. Schäfer, a bookshop owner from Bonn, Germany, is supervising the crew members at the ship’s foremast, from which five square sails hang. Krosanke met Schäfer on Star Clipper six Aprils ago, proposed to her on Star Clipper four Aprils ago, and married her at the base of Star Clipper’smainmast while dolphins frolicked at the bow. During each of those Aprils, Krosanke stood behind the large wooden wheel, appearing as comfortable there as would the captain for each of those earlier voyages, Uli Pruesse. In December 2004, Pruesse, the gentleman depicted on the crew members’ buttons, passed away unexpectedly of complications from heart surgery at the age of 61.

Capt. Pruesse’s presence is missed most by Krosanke and Schäfer, over whose wedding he presided, and by Gary and Marcia Robbins and numerous others on deck in whom he kindled a love of sailing. The race crew T-shirts are available to everyone on this voyage, but the buttons are distributed quietly among this subgroup of loyal returnees known as “hardcores.” Despite their grief, and in many cases because of it, most hardcores kept their bookings on this annual Caribbean voyage, which Pruesse created as a private charter in 1998. They have come to remember their friend and to decide whether the event that he started should go on without him. Star Clipper is racing solo in the 2005 Tall Ships World Peace Cup, because Pruesse, who in years past personally secured participation from other tall ship owners, became ill at the time when he would have been confirming entrants for this year’s race fleet. “Even if the race falls apart and doesn’t continue, at least we’ll have closure,” Marcia Robbins says. “If nothing else, we’ll have that.”

Pruesse captained vessels for Star Clippers, a cruise line headquartered in Monaco that maintains a fleet of three tall ships, including Star Clipper. The company offers a slate of itineraries in the Mediterranean, the Caribbean, and the Far East, as well as transatlantic crossings and other sailings. A native of Hamburg, Germany, Pruesse was born to the sailing life; his father captained shipping barques from the P-Line fleet around Cape Horn, the perilous waters off the tip of South America. Seven years ago, he began chartering Star Clipper, which can accommodate a maximum of 170 travelers, and entering the vessel in the Tall Ships World Peace Cup, a race that occurs during the final two days of the voyage and usually involves four or five other vessels. Pruesse created the Peace Cup for the Antigua Classic Yacht Regatta, an annual gathering of vintage and vintage-style yachts and other classic vessels. He initially invited passengers from past Star Clippers sailings, friends, and others to book passage on his voyage, tempting them with the opportunity to serve on the deck crew during the race.

By sharing the riveting experience of sailing a tall ship, the repeat vacationers evolved into a community. “I met my husband on the first trip, and he is one of the reasons that I came back, but I would have come back [anyway],” Schäfer says during a break in this year’s race. “It feels like home here. I think we’re like a little family now.” Pruesse was its charismatic father, the man who provided the ship, taught the hardcores how to operate it, and allowed them to race it during the Antigua competition, albeit under his benevolent watch. “He was the perfect captain,” Schäfer says. “We could trust him, and the trust came from both sides. We were always safe when he was here.”Pruesse, a stocky, gregarious man who embodied a casting agent’s idea of what a German sea captain should look like, was seemingly incapable of speaking without using his hands. Whether he was conversing in German or English, and whether he was lecturing about sailing or awarding prizes at a post-race beach party, his hands, as much as his words, expressed his enthusiasm. “Uli was a great teacher, a great leader,” says Charles Byrne, an 81-year-old hardcore and Newport, R.I., neighbor of Pruesse who wrote an 800-word obituary for his friend. “He could take 60 to 70 people and, in two or three days, make an effective race crew out of them. He could do that.

“Uli used to talk about taking a tall ship around Cape Horn,” continues Byrne. “He had a little notebook with him, and he would ask people if they wanted to sign up to go around the horn. He had 250 passengers’ names in that notebook. We would have sailed anywhere with him. It gave him great satisfaction to see how much people loved him and loved his leadership. We loved him.”

Mikael Krafft, the president and owner of Star Clippers, recognized Pruesse’s endearing qualities years before he hired him, when both were anchored in the same port in the early 1980s. Because Krafft was vacationing, he had taken the helm of his own ship, a schooner named Gloria; Pruesse invited him to dine aboard Ashanti of Saba, the schooner that he was skippering professionally. “He thought I was the hired captain, and he mentioned to me, ‘I hear you have a very terrible Swedish owner,’ ” Krafft recalls, stifling a laugh. “I agreed that the owner was very terrible, and we talked badly about him during the dinner.” Regardless of whether Pruesse knew his dinner guest’s true identity, the insults did not injure the relationship; Pruesse became one of Star Clippers’ first captains.

Krafft is aboard Star Clipper for this year’s Antigua race, which he added to the company’s catalog after the captain’s death. He is here to honor Pruesse’s memory and to discuss with the hardcores how best to continue the voyage, and by extension the race, beyond this year. “I want [the hardcores] to feel that this will not end because Captain Uli is not with us,” he says. “We want to try to continue his tradition.”

Indeed, even after he boarded, Krafft was still trying to find other tall ships to participate in this year’s Peace Cup; having spotted a three-master in the St. Maarten harbor, the port from which Star Clipper departed, he attempted to locate its owners and invite them to compete at his expense. Krafft, determined to find rivals for next year, does secure initial commitments from tall ship owners during the Antigua regatta.

Most of the hardcores had communicated with Krafft through e-mail after Pruesse’s death, but this voyage is their first opportunity to speak with him. “It was important for me to hear from Krafft that he has the same passion as Uli did,” says Gary Robbins. “I do not doubt his sincerity, and for him to personally take the time to come here speaks volumes to me. Once it was clear that he wanted the event not to change, there was no doubt in my mind that [my wife and I] would continue to come.”

Krosanke was convinced as well. “There was no question that [my wife and I] would come this year, and we will come again next year also,” he says. “From my heart, I am pleased with the way things have gone. We need the owners to make this happen, and I feel that Krafft has enthusiasm for sailing and can make it happen.”

The hardcores would later learn that the dates for the 2006 Peace Cup race, April 22 and 23, occur too late in the year to permit other tall ships to join Star Clipper in Antigua; by late April, the vessels will have departed the Caribbean to sail to Europe for the start of the Mediterranean season. The 2006 cruise is still scheduled for April 15 to April 24, departing from and returning to St. Maarten, and visiting the islands of St. Bart’s, St. Kitts, Nevis, Îles des Saintes, Guadeloupe, and Dominica before arriving in Antigua. The 2006 race will consist of solo time trials, as it did in 2005. In light of this news, Krosanke and his wife decide to cancel their 2006 reservation, but they say they may return for 2007. The hardcores are now considering whether to hold the Peace Cup earlier in the year so that owners can fit it into their Caribbean-season schedules.

Ultimately, the Peace Cup’s survival will depend on whether Pruesse’s hardcores can share their love of sailing with Star Clipper’s newer arrivals, as the captain did with them. “Every evening, Uli would hold a talk at the mainmast,” Robbins says, recalling how he caught the sailing bug from Pruesse. “He’d talk about the traditional square-riggers, and about how his dad sailed P-Liners. The more he talked, the more I was able to visualize things, and it got into my blood. Uli started the fire and fanned the flames.”