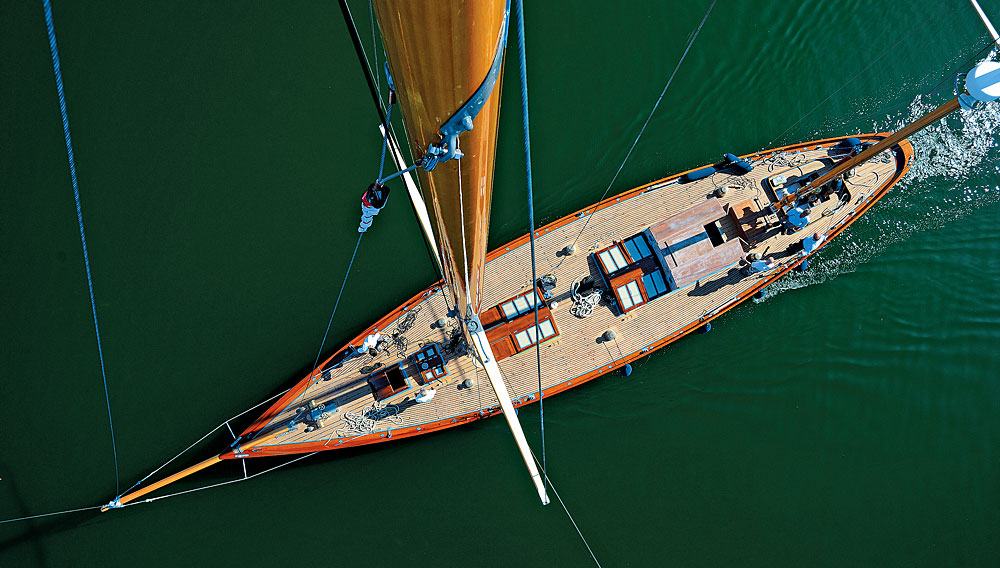 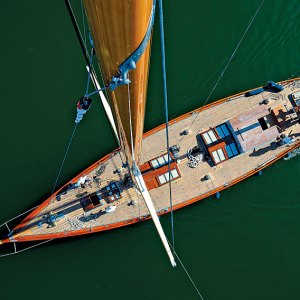 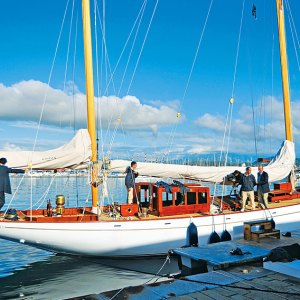 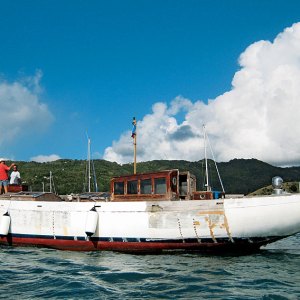 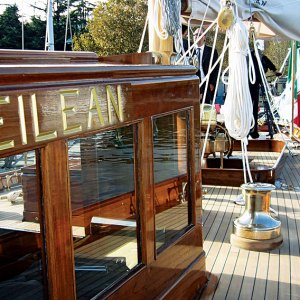 “If you want to build a ship,” the French pilot, poet, and author Antoine de Saint-Exupéry once said, “don’t herd people together to collect wood and don’t assign them tasks, but rather teach them to long for the endless immensity of the sea.”

That lesson need not be conveyed to Angelo Bonati, CEO of Swiss watch manufacturer Officine Panerai, who quoted Saint-Exupéry at last fall’s unveiling of the newly restored Eilean.

Bonati and his team of naval architects and shipwrights had gathered at an Italian naval base in La Spezia to celebrate the rebirth of Eilean (Gaelic for “little island”) after Panerai’s two-and-a-half-year, 40,000-hour restoration of the 72-foot, two-masted Bermudian ketch. Oblivious to the driving October rain, a brass band played exuberant tunes as Eilean’s crew stood proudly on her immaculate teak deck before an international crowd of admirers.

Eilean, which will formally debut in June at a regatta at Les Voiles d’Antibes, in the French Riviera, was originally designed and built in just eight months at the famed Fife boatyard in Fairlie, Scotland. Launched in 1937—the year of the Hindenburg disaster and the completion of the Golden Gate Bridge—she most recently spent more than three decades in Antigua, where she was a popular charter vessel that even landed a starring role in Duran Duran’s 1982 “Rio” music video. In her 73 years, Eilean has completed 36 Atlantic crossings, not counting her last—when she had to be carried from the Caribbean to Italy in the belly of a cargo transport ship, unable to make the voyage on her own.

bonati first encountered the rusting, mastless Eilean in 2006. The wreck was moored to a tugboat and tied up to the mangroves in Antigua’s English Harbour, but Bonati fell in love at first sight. “Having such passion for sailing,” he remembers, “I understood immediately the potential for communication she had.”

Eilean, whose design was inspired by the elegant J-Class yachts that competed in the America’s Cup during the 1930s, was owned by Antigua resident John Shearer when Bonati discovered her. Shearer, a former architect who had sailed on Eilean as a child when she was skippered by his uncle, acquired the yacht in the 1970s and operated her as a charter boat. He spent several subsequent years attempting to restore his beloved yacht, piece by piece. However, with limited resources, Shearer could not keep pace with Eilean’s decay, and she rotted before his eyes and beneath his feet.

After discovering Eilean in Antigua, Bonati mentioned the yacht to Italian naval restoration specialist Enrico Zaccagni at a Mediterranean regatta in 2006. Having lived on his own boat in the Caribbean during the 1980s, Zaccagni knew instantly what vessel Bonati was talking about—and agreed to accompany the Panerai chief to survey the find. “In a sense, he was asking me if it was a good idea to buy this wreck and try to refit and restore her,” recalls Zaccagni, who supervised the restoration. “For another person, it would have been very difficult to do, but Bonati had Panerai behind him, so he was able to invest quite an amount of money. That is the only reason this boat was able to be restored.”

Panerai acquired Eilean in 2006 and had her towed to the Francesco Del Carlo boatyard in Viareggio, Italy. The yacht’s steel interior structure—most boats of her era were constructed from wood—was rusted beyond repair, so Zaccagni’s team had to replace the frames and beams inside while preserving the outside shell as much as possible. “This was a very difficult operation because you have to remake those structures exactly as they were,” says Zaccagni. “And these pieces of steel were not welded but riveted, which is not the way we build today.” However, the architect was able to locate a few craftsmen who were skilled in the riveting technique, and his team underwent extensive training to learn the process.

Zaccagni rebuilt Eilean’s mast from strong, lightweight Alaskan silver spruce in accordance with her original drawings, only slightly taller, at about 93 feet, to allow for a bigger sail for use in gentle Mediterranean breezes. Most of the tough Burmese teak planking that serves as her skin, as well as the nearly 550 square feet of teak decking, was salvageable, as were the deckhouse, hatches, skylights, and helm. But the wooden interior and furnishings were lost to termite damage and had to be re-created. For a finishing touch on the vessel, Panerai made a unique set of sailing instruments, including a barometer, hygrometer, thermometer, and wall clock.

“For two-and-a-half years I watched the boat growing every day,” says Zaccagni. “It was like a rebirth, and it was very exciting. She is beautiful. But she is even more beautiful to me because I know how she looked before.”

now flying an Italian flag, Eilean begins her new life as the flagship of Panerai, which began working on its first prototype of an underwater watch for the Italian Royal Navy in 1936, the same year initial work began on the boat. Today, in addition to maritime watches, the company’s nautical links extend to its sponsorship of the Classic Yachts Challenge, a circuit of Caribbean, Mediterranean, and Atlantic regattas that include the Antibes event where Eilean will make her official debut.

Bonati, who learned to sail in his thirties, believes that such events are a powerful symbol of the core values of his brand. “The classic yacht regattas maximize the expression of our tradition, which is linked to the sea,” he says. “When you see a big, modern yacht, you immediately think about how much it costs. With classic yachts, you think about the beautiful details, the dreams they evoke, freedom, tradition, values.”

Since initiating the project in 2006, Bonati has anxiously awaited his opportunity to make his first Atlantic crossing on Eilean, which will finally head back to Antigua for the 2011 Antigua Classic Yacht Regatta. “People here are very emotional about the whole thing,” Bonati said at last year’s Antigua event, which is also part of Panerai’s Classic Yachts Challenge. “They come up and thank me for restoring her; some even start to cry.”

Surely, none will be more emotional than John Shearer, but do not expect him to show it. At Eilean’s unveiling last fall, Shearer appeared detached at what must have been a bittersweet moment after 34 years as her devoted patron. Despite his acknowledgment that it was difficult to see her with a new crew, he solemnly declared, “She is the way she should be.”