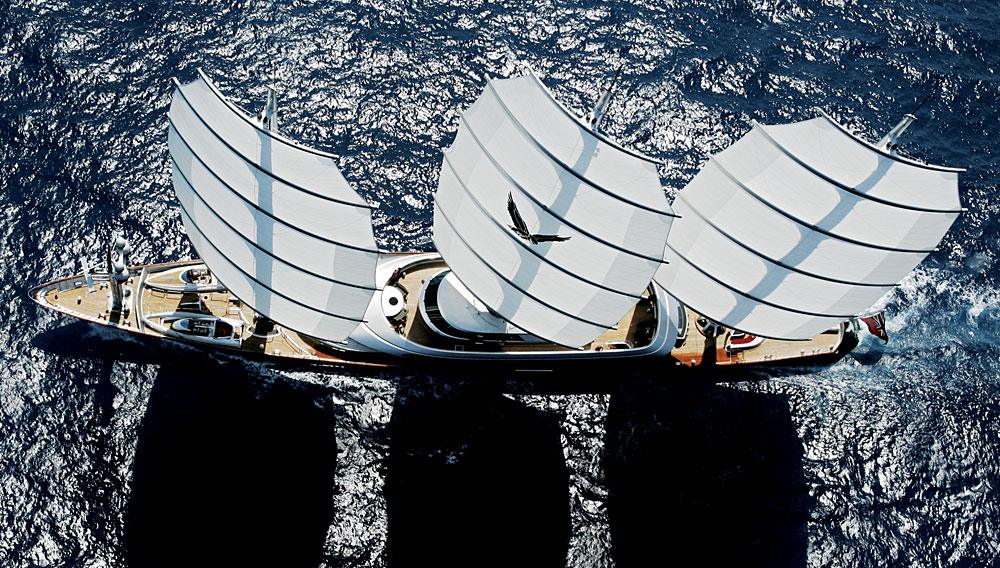 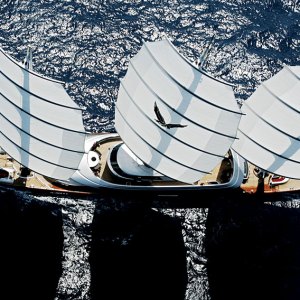 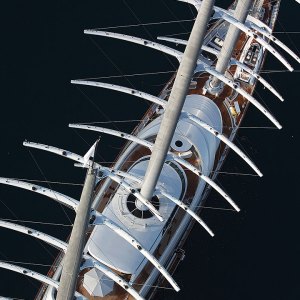 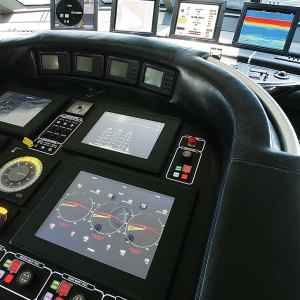 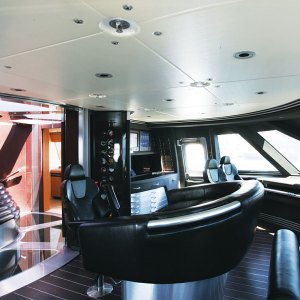 The moment tom perkins first took the helm of Maltese Falcon marked the culmination of his quest to create a new breed of mechanically sophisticated sailing superyachts. In 1999, Perkins—a venture capitalist and a former director of Hewlett-Packard—declared that he wanted to build a sailing yacht that would employ the DynaRig concept, a square-rigged sail plan attached to a freestanding mast that uses motors, not crew, to unfurl the sails. The DynaRig was conceived in Germany in the 1960s, but for various reasons it was abandoned.

Breathing life into this untested design took Perkins four years of experimentation, millions of dollars, and several spectacular failures. He eventually succeeded, and in doing so he radically changed the way designers of sailing yachts approach their craft.

Perkins recalls being nervous on Maltese Falcon’s 2006 maiden voyage through the Sea of Marmara, not far from the Turkish shipyard where the yacht was built. “There were a million things that could have gone wrong,” he says, “but we decided to put the boat to the wind and go for it.” Perkins then pushed a few buttons on a console, and 15 sails on three freestanding masts unfurled and filled with wind. The fundamental technology that sailors had used for thousands of years to propel themselves across water was, in that moment, rendered obsolete. “Everything worked, just as the computer said it would,” Perkins says. “We were doing something that had never been done before. The whole point was to make the boat as automated as possible so that the crew would not have to go up and down the masts to work the sails. We proved that, using computers, one person standing at the helm can sail the Falcon.”

Traditional sailing superyachts require several crew members to hoist the sails or stow them belowdecks. Now, however, boats like Bristolian, Mirabella V, Mondango, Nirvana, Saudade, Kokomo, and several others that launched in the last few years have automated furling systems like Maltese Falcon’s to stow sails, and electric winches that do the work of a half-dozen sailors. Skippers control virtually every function of these yachts from one or more computer consoles near their steering wheels. Thus, crews are smaller and may now include an IT engineer to deal with the sophisticated electronic systems that control numerous facets of this kind of yacht.

“Twenty-five years ago, nobody could have predicted what would happen in the private-yacht world,” says designer Ron Holland, whose breakthrough yachts include Mirabella V, Salute, and Ethereal. Holland says that the trend toward ever-larger yachts was driven by the private wealth created by tech businesses and their owners wanting to make a fresh statement. But as the yachts got larger, the ability to use conventional methods—manhandling everything with a large crew—became impossible, so they had to develop products to simplify life.

In 2005, Holland launched the 247-foot Mirabella V, which at the time was the world’s largest sloop, with its single carbon-fiber mast towering 295 feet above the deck. The design of the 765-ton Mirabella V, which includes a 150-ton retractable keel, was as technologically ambitious as it was unprecedented. “I wanted to create a sailboat that could compete with a motor yacht in terms of comfort and luxury but sail like a dinghy,” says the boat’s owner, Joe Vittoria, a former chairman and CEO of Avis. “I saw this as the next step in breaking the size barrier without compromising on speed.” Holland estimates that the project required roughly 15,000 hours of design work; between his team and the shipyard’s, more than 30 designers and naval architects made roughly 2,000 drawings for the project.

Most components of Mirabella V had to be designed from scratch because there were no winches, masts, or even ropes capable of handling the wind load that would be placed upon them. Likewise, Vittoria wanted a deep draft of 33 feet for ocean sailing and a 14-foot draft that could be employed in shallow island waters, so designers created the vessel’s signature retractable keel.

Mirabella V’s most radical attribute was its composite-materials construction, a weight-saving departure from the steel or aluminum normally used. The lay-up included strong-but-light “exotics,” such as Kevlar reinforcement, carbon fiber, and S-series fiberglass. “Of course all the sail controls had to be push-button in order to keep control over the number of crew,” Vittoria says. “And we had to divide the sail into six panels because otherwise it would be impossible to handle. It weighs well over a ton.”

Vittoria is happy with his groundbreaking yacht. “I spend three to four weeks sailing every year, and I love it,” he says. “Unlike many of the other superyachts, it is designed for upwind performance. It heels over and can reach 19 knots faster than some motor yachts. And it consumes a lot less fuel.”

holland accomplished something of a hat trick with the 2008 launch of Salute, the 184-foot Perini Navi superyacht that has the second-tallest rig in the world (after Mirabella V’s). Its mast is made of aluminum, not carbon fiber. “It’s quite a high-cost premium,” Holland says. “But it increases Salute’s upwind speed, and performance matters to many of these owners.”

Indeed, for sailing-superyacht owners who come from racing backgrounds, a yacht’s performance often takes precedence over its size and comfort. “Most big boats need hydraulic steering, so they’re not very responsive, and the helmsman doesn’t really feel the connection between the boat and sea,” says Peter Tabone, the captain of a sleek black superyacht called Bristolian that launched last summer. “But my owner is very performance-driven, so it’s important for the boat to steer like a maxi race boat. This one feels edgy—light and fast like a dinghy—until we drop the 37-ton bulb keel and it turns into a fantastic ocean cruiser.”

Philippe Briand, who is known for creating ocean-racing sailboats, designed Bristolian, while New Zealand’s Yachting Developments Limited (YDL) built the vessel. “Another major difference with this new generation of super sailboats is that they chase the sun,” says Murray Greenhalgh of YDL. “They can cover tens of thousands of nautical miles per year because of their speed.”

Bristolian’s lightweight hull construction employs the latest composite materials—materials that Greenhalgh says enable engineers and designers to create “smarter” hulls. “We can now put perforations like large lockers right next to the masts; that lets you stow your halyards out of sight,” he explains. “Also, because our carbon-fiber booms are so well-engineered, there is a minimum intrusion of ropes or carriages in the vessel. It’s just cleaner and safer.”

As sailing superyachts have grown larger, designers have been forced to rethink the way they build hull bottoms. The problem is that the bigger a boat is, the deeper its draft. Yet according to Ed Dubois, who has designed sailing superyachts including Kokomo, Nirvana, and Mondango, “You can’t just increase the draft relative to the longer length of the hulls. Most harbors restrict entry to vessels with drafts deeper than 16 feet.” This restriction has led to the development of retractable keels that can weigh up to 100 tons. These keels “drop” from roughly 14 feet to 30 feet, a function Dubois says requires a sophisticated design: “You have to make sure you get the engineering right on a 100-ton lifting keel.”

High-tech engineering was, obviously, key to Maltese Falcon’s success as well. “You have to understand that these are totally freestanding masts and sails, not supported by any stays,” says Damon Roberts, who masterminded the engineering, design, and build of the rig in the Maltese Falcon project. “The sails come out of the mast and furl back into the mast. The loads on these rigs can be three times the biggest wind-turbine blade and even more than the wing of a Boeing 747. They had to be made out of carbon fiber since metals can’t handle that.”

Roberts says the design of the massive sail plan included an advanced fiber-optic system embedded in the sails. “It performs like a neural network that monitors [the wind load],” he explains. “You get very accurate load information from that, which helps one person sail such a huge yacht.”

Roberts, along with yacht architect Gerard Dykstra and Maltese Falcon’s skipper, Chris Gartner, developed the boat’s high-tech rig in a one-sixtieth-scale model and then set up a full-size test rig on a steel-girder frame at the Turkish shipyard. “It took a lot of wind-tunnel testing to get the hull right, and we had to add about five feet to the bottom of the boat because it sailed like a pig,” Gartner says. “It took several years to get the rig right because we kept breaking sails. If we hadn’t set up the prototype, it would’ve been a full-on disaster.”

Gartner, once the captain of the classic Herreshoff schooner Mariette, likens sailing Maltese Falcon to playing a video game. “It’s not like Mariette, which was an orchestrated event every time you jibed,” Gartner says. “This is automated. I look at the consoles and push buttons. Jibing tends to be a complicated maneuver on any other sailboat. On Maltese Falcon, we do it just for fun.”