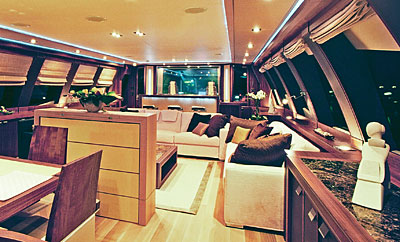 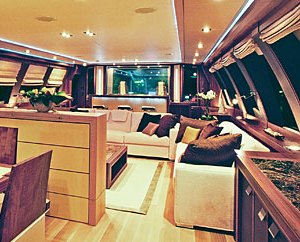 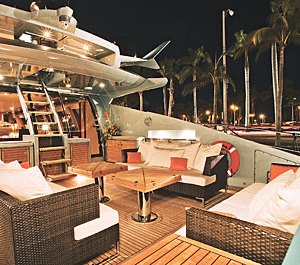 In a building resembling an aircraft hangar, dozens of men clamber over an object as large as a house. They mount ladders and clatter across metal catwalks, carrying planks and tools and loops of wire; they kneel to sink screws or run pipes; they scrape and hammer amid the screech of sanders and the sizzle of welding torches. Up close, it is difficult to identify what they are working on, but from farther back one sees a long, high arc of aluminum running along the structure’s length—a muscular curve that recalls a dolphin’s back, ending at a metal prow.

“This baby will be on the water in three weeks,” says Mike Kelsey Jr., the president of Palmer Johnson Yachts, standing atop what will be the first 150-foot Sport Yacht to emerge from his boatyard in Sturgeon Bay, Wisconsin.

Some of the men pass by, nodding politely. If they appear pleased to see Kelsey, they have reason to be: Only three years ago, Palmer Johnson faced closure, and many of the workers feared for their jobs. But now the company’s order book is once again being filled, and Kelsey has launched a massive expansion program to keep up with demand.

In 1997, his father, Mike Kelsey Sr., then the company’s president, had an idea for a production yacht. At the time, Palmer Johnson made highly regarded custom boats but lacked a production line. In the new series, as Kelsey Sr. imagined it, owners would be able to customize the interior to a certain extent—the wood and finishes, the fabrics and colors—but every example of the yacht would share the sleek lines and streamlined appearance of the world’s most exciting sports cars. The yachts would compete not with American boats but rather with those from builders such as Heesen in the Netherlands and Ferretti in Italy.

In the ensuing seven years or so, the company went through what Kelsey Jr. frankly describes as hell. But it has pulled itself back from the brink by phasing out its custom business and focusing exclusively on fulfilling Kelsey Sr.’s vision. By now, Palmer Johnson has built five examples of its remarkable 120-foot Sport Yacht production series, and hulls numbers 6 and 7 have been sold at prices exceeding $10 million each. It also has delivered the first two of its 123-foot Raised Pilothouse series. It will introduce both 135-foot and 150-foot versions of the Sport Yacht at the Miami International Boat Show in February, and it probably will deliver a 165-footer within the following year. “And then,” Kelsey Jr. promises, “we will build the largest sport yacht in the world.” He declines to divulge the length but later hints that the vessel could exceed 200 feet.

Sturgeon Bay, located on a peninsula jutting into the northern part of Lake Michigan, was settled in the 18th and 19th centuries by German and Belgian immigrants who brought with them a rigorous work ethic and strong woodworking skills. Their lives revolved around fishing and boatmaking. Even now, the town’s two largest employers are Palmer Johnson and Bay Shipbuilding, a maker of oil barges and other large commercial vessels. Kelsey’s company was founded in 1918 as Johnson and Gmack, which made and repaired boats for the area’s commercial fishing fleet. The owner’s son, Palmer Johnson, built the firm’s first wooden yacht in 1928. During World War II, under the name Sturgeon Bay Boat Works, the company constructed rescue boats and freighters. In the 1950s it renamed itself again, as Palmer Johnson Boats, and began creating luxury aluminum motor and sailing vessels. Pat Haggerty, a founder of Texas Instruments, purchased the outfit in 1961. It had 15 employees at the time.

Haggerty, a pioneer in fabricating aluminum boats with seamless welds, exerted a lasting influence. “Wolter Huisman visited me before he died,” Mike Kelsey Jr. recalls. (Huisman, managing director of the Netherlands’ Royal Huisman Shipyard—another maker of aluminum superyachts—passed away in 2004.) “He was a friendly foe. And he told me that I had two of the best seam welders in the industry.”

Haggerty taught the business to his son-in-law, Mike Kelsey Sr., who subsequently purchased the company and put his son to work: “When I was a kid, I would count screws in the stockroom,” Kelsey Jr. recalls. “I joined the company when I was in high school, in the 1970s. After school I went straight to the boatyard—a 7-mile round-trip on my bike—and during the summers I worked here full-time. I learned everything about boatbuilding: woodworking, electronics, air-conditioning. I still know most of the people on the floor. They’re fierce about quality, and they aren’t afraid to speak their minds about it.”

But Kelsey Jr. faced a serious trial. In 2000, his father sold the company to Andrew McKelvey, CEO of the job-search web site Monster.com. McKelvey, an absentee owner, had a business plan that Kelsey Jr. describes as fuzzy at best. “He moved us into yacht brokerage, charter, refitting, concierge services, diesel fuel, scrub brushes—no one could keep their eye on the ball.”

By this time, Palmer Johnson had embarked on its plan to build production boats. Timur (Tim) Mohamed, a British investor and world-class cricket player, had purchased the first of the new Sport Yachts, and he had some ideas about improving the boat’s design. He also was impressed with the workforce at Sturgeon Bay—including Kelsey Jr., who was then serving as vice president of marketing. Kelsey Sr. died in 2002, at the age of 67, and Palmer Johnson, broken by its lack of focus, filed for bankruptcy nine months later. Undeterred, Mohamed took steps to acquire the company.

Over the next year or so, an alternative buyer emerged, lawsuits were filed, and Kelsey Jr. was fired. But by mid-2004, Mohamed had prevailed. He brought a hefty amount of cash to the operation, installed Kelsey Jr. as president, and suggested some changes to the yacht’s back end. Standing atop the 150-foot Sport Yacht at the boatyard, Kelsey points to its stern. “See the way the hard and soft edges meet?” he says. “It’s sweeping, athletic. Tim gave us a defining look.”

As Kelsey continues his tour, he points to four more boats under construction: another 150-footer, two 135-footers, and a 90-foot sailboat. This number does not please him. Kelsey says that he can build a Sport Yacht in 12 to 18 months, depending on the size, but his production backlog is growing because the boatyard is too small. (The backlog currently extends to early 2009.) The main plant measures only about 67,000 square feet, forcing Kelsey to house parts of his operation in other buildings scattered around town. To solve the problem, he plans to open a new 220,000-square-foot facility by the end of 2007. He expects that the new plant will enable him to launch five production boats in 2008, six or seven in 2009, and ultimately eight to 12 boats per year.Meanwhile, Palmer Johnson runs three shifts around the clock. The workforce, which numbered about 125 a couple of years ago, has grown to about 300, and Kelsey expects to boost this to 500 when the new plant opens. The employees are mainly locals of German and Belgian descent, and many have worked at the company for more than 30 years. “I like to say,” Kelsey remarks, clearly referring to Heesen, “that we’re as stubborn as the Dutch.”

And as scrupulous. Walter Wetmore, who pilots Muse, Palmer Johnson’s second 123-foot yacht, for its owner in the Caribbean, points out that the company listens carefully to captains and crew. Wetmore also has captained Cover Drive, the company’s first 120-footer, and Finish Line, its first 123-footer, so he knows Kelsey’s operation. “Most yacht designers don’t set foot on a boat once it’s launched,” he says, “but Palmer Johnson keeps asking questions. Look at the 120 series: The instrument layouts, the storage spaces, and other pieces keep evolving. The crews have contributed to that.”

Kelsey notes that Palmer Johnson was the only boatbuilder to win two trophies at the Cannes International Boat and Yacht Show last year, for best open-boat and best flybridge series. Powered by twin MTU German diesel engines, the 120 and the 123 Sport Yachts achieve cruising speeds of 30 mph and 22 mph, respectively, and both have a transatlantic range at 14 mph. Italy’s Nuvolari-Lenard handles the exterior and interior design.

The interiors provide everything one would expect of a superyacht: four or five staterooms; separate crew quarters; lots of marble, granite, and exotic woods; Italian furnishings; and plenty of space for water toys. Stairs to the sundeck on the 120-footer can retract out of sight, then redeploy when someone wishes to sunbathe. A wall belowdecks performs a similar disappearing act to open up the media room.

No such refinements are evident in the new 150-footer yet, but Kelsey vows that they will be—within three weeks. And now, as he wraps up his tour, he passes one of the 135-footers, where one of the workmen is Martin Kelsey, his 21-year-old son. Like his father and grandfather before him, Martin is learning the business. “I’m glad he’ll get to continue things,” Mike Kelsey Jr. murmurs. “Especially with the hard times behind us.”