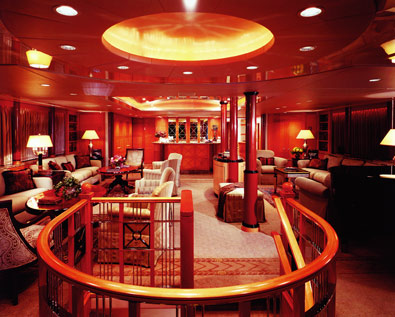 Nascar Winston Cup team owner Felix Sabates becomes the most popular person at Daytona Marina during the February week preceding the Daytona 500, when he hosts nightly dinners and cocktail parties aboard his yacht. The invitees include friends, sponsors, colleagues, and other VIPs of stock car racing. Sabates, who is also co-owner of boatbuilder Trinity Yachts in New Orleans, usually knows each guest by name.

However, during a Daytona party in 1990, a couple he had never met boldly asked if they could come aboard the 103-foot Broward he owned at the time. (He has owned more than 30 yachts over the years.) “They were friendly,” Sabates recalls, “and there were 50 people there, so I figured two more wouldn’t hurt.”

Sabates’ gesture would prove prosperous. Halfway through the party, the husband approached Sabates and asked if the Broward was for sale. He and Sabates huddled at the boat’s bar and negotiated until 3 am, when they signed an agreement that they had drawn up on the back of a cocktail napkin. The following year, Sabates was hosting his Daytona parties, this time aboard a different yacht, when the husband returned and signed another contract to purchase that vessel. Three more times he came back to Daytona and bought the yacht on which Sabates was hosting a party—each boat larger than the last. “That works out to $110 million,” says Sabates.

When he chose to welcome the couple onto his Broward on that February night in 1990, it led to some of Sabates’ most significant onboard business transactions. But there have been many others that did not involve the sale of his boats. He has inked seven-figure sponsorship contracts on deck and in the saloon, and he has hosted potential clients on island-hopping trips to lay the groundwork for future dealings.

Sabates is among a legion of mega-yacht owners who recognize that their vessels are excellent venues for entertaining clients and conducting business—often even more effective than their homes, offices, or private jets. “Back when [Donald] Trump had his big yacht, what do you think was a more effective tool for getting people to meet with him, a plane ride in his 727 or a cruise around Manhattan?” asks William Smith, Trinity’s vice president of sales and marketing. Many clients, says Smith, might decline an invitation to a cocktail party at someone’s house, but few ever turn down an evening cruise aboard a megayacht.

Entertaining aboard his yacht, says Sabates, lends him a psychological edge over potential clients. He is in control of the environment, his guests becoming a captive audience. A client could leave an office meeting at any time, but unless a tender is following alongside, it is decidedly more difficult to walk away from the negotiating table at sea. “It’s a lot easier when you get someone on your own turf. There’s a much more relaxed atmosphere on the boat, and you don’t feel the same pressure as in an office,” says Sabates. “I’ve spent maybe 10 personal days in 10 years on the yachts.”

Milton Ferrell, chairman and CEO of Ferrell Schultz Carter Zumpano & Fertel, a Miami law firm with offices in South America and in the Middle East, works aboard his 92-foot Burger three or four times a week. He frequently uses the yacht as a recruiting tool, cruising from port to port while holding meetings with potential employees. “The yacht gives me a chance to speak with them privately,” says Ferrell. “It’s often a dinner or lunch cruise, a kind of informal, quasi-social occasion to feel them out.”

The technique often works. Ferrell says that his onboard meetings have helped him convince 25 executives, including managing partner Joe Zumpano, to jump ship, so to speak, and join his team. “Here was a very special group of people who took the time to share the best part of Miami with me. I was grateful,” recalls Zumpano, who joined the firm three years ago, following a cruise aboard the Burger in Biscayne Bay.

Once Ferrell signs his new lawyers, he invites them and their clients onboard. “If I wanted to increase our relationship with a company we had done some litigation for, I’d invite the CEO on a cruise and introduce him to our transactional people,” he says. “I can’t imagine a more pleasant way to discuss business.”

JM Family Enterprises, an automotive corporation in Deerfield Beach, Fla., has also experienced the benefits of owning a yacht, or, in its case, five yachts (a 172-foot Feadship, a 160-foot Delta, two 60-foot Vikings, and a 58-foot Sea Ray, all named Gallant Lady), each of which is used strictly for business. One of the company’s subsidiaries is Southeast Toyota Distributors, and Toyota executives are often invited aboard. JM Family Enterprises also hosts onboard parties dubbed “Millionaires’ Nights” to reward dealers who have met or exceeded the company’s sales projections.

The corporation’s megayachts also play a part in the Jim Moran Foundation, named for JM’s founder, which contributes to the Boys & Girls Clubs of America, the United Way of Broward County, and other nonprofit organizations. The foundation donates time aboard the yachts for the organizations to hold meetings. It has even flown the local United Way staff to the vessels’ winter bases in the Virgin Islands for planning sessions. After successful fund-raisers, the foundation throws onboard celebrations for staff and donors, generating good will and possibly prompting additional contributions. “It’s proven quite successful,” Jan Moran, Jim’s wife, says of the onboard parties. “At black-tie functions, people never really get to know one another. But on a boat, you get to know each other on a gut level.”

Entertaining a client on board may not necessarily spark a handshake deal over drinks in the saloon, says Hatteras designer Chad Voorhees, but it may lead to more traditional meetings in the future. “I think doing business on a boat has more to do with showing the client a good time and laying the foundations for a future relationship than with sitting around smoking cigars and actually doing transactions,” says Voorhees.

With this in mind, Voorhees recently designed a 100-foot Elite series yacht for a client. “I want this forward stateroom to be as nice as the master stateroom, nice enough that the CEO of Exxon will feel at home,” the client told Voorhees, adding that he wanted to “dazzle” guests with opulent marble counters and gold-detailed faucets.

As a business tool, however, yachts can be used for more than just entertaining and impressing clients. Many owners are ordering vessels with the latest communications technology, transforming their boats into floating satellite offices. Herman Goldsmith, who owns The Motor Network, a Hewlett, N.Y., luxury automobile sales and leasing company, has been conducting business from his Hatteras yachts since the 1980s. A decade ago, Goldsmith completed one of his largest deals—selling a division of his company—on a cell phone from his boat.

Today, Goldsmith remains connected to his office by carrying two cell phones, a laptop, and a BlackBerry wireless e-mail device aboard Dani, his 74-foot Hatteras. Every Friday during the summer, Goldsmith can be found cruising the coast of Maine, Nantucket, or Long Island, taking calls and receiving e-mails from clients while enjoying the company of his wife, Susan, and daughter, Dani.

Gordon Stewart has also used advances in wireless technology to turn Serenity, his 105-foot Burger, into a remote office. Stewart, who owns auto dealerships in Michigan, Florida, and Alabama, has equipped Serenity with cell phones, a fax machine, a scanner, and a laptop, enabling him to work while cruising with his wife, Linda, for weeks at a time.

While Stewart has turned most of his dealerships’ day-to-day operations over to his son, he remains involved in long-term strategy and targeting acquisitions, working five or six hours a day aboard Serenity. “Once the phone starts ringing, I go into work mode,” he says. “I spend five or six hours a day working. Otherwise, you get so far behind.”

Roger Black, a magazine designer who lives in Manhattan, works on a wireless laptop on his 12-meter Apreamare for about three months each year. For meetings, he cruises to the nearest port, flies from there to see his clients, and returns to his boat.

Black says he is just as productive in the saloon of his boat as he is in New York—perhaps even more so, because he encounters fewer interruptions. He recalls a recent e-mail exchange with an art director at New York magazine after he had helped to design a cover for the publication. “Where are you, anyway?” the art director wrote from her cramped Madison Avenue office in Manhattan. Black e-mailed back: “You don’t want to know.”