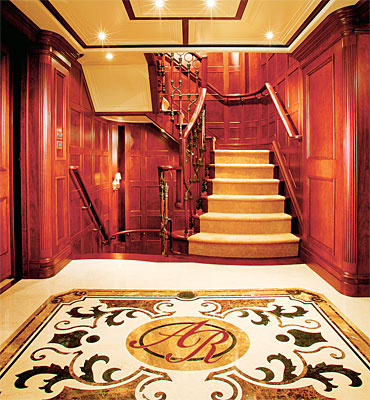 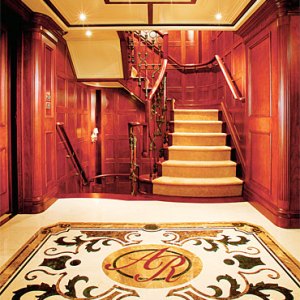 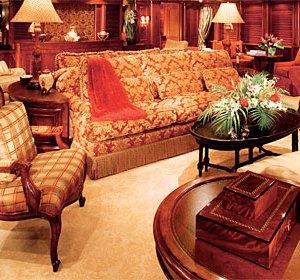 From its summertime berth on the Italian coastline, Giant, a 247-foot IHC Holland behemoth with a bright red hull designed to clear waterways through the Arctic ice, stands out like a warning flag among the sleek, white speedsters that speckle the Mediterranean. The expedition yacht, which offers passengers willing to pay its $300,000-per-week charter fee a master deck instead of a master suite, resembles a commercial shipping vessel and is built to conquer harsh waters that standard mega­yachts dare not enter. From that master deck or any other vantage point on Giant, however, it is unlikely that a charter captain and his or her passengers will see such waters in the near future.

Just as so many drivers who formerly owned sedans and minivans became smitten with the appearances and advantages of SUVs, those who owned more traditional boats embraced the capabilities—and perhaps the menacing form—of expedition yachts. With massive fuel tanks and stowage areas, the vessels, most of which are steel and some of which have been converted from commercial or military use, can cruise for months at a time. Over the past five years, dozens of expedition yachts have been built, and some of them, including Giant, originally built in 1973 and refitted in 2002, now have entered the charter market. But like Hummers that venture no farther than the mall and haul nothing heavier than grocery bags, most of these go-everywhere charter yachts are not going anywhere. Giant spent the summer in the Mediterranean and will cruise in the Caribbean this winter. Senses, a 194-foot Sch­weers expedition yacht that was refitted in 2004, is expected to continue mooring year-round. Aussie Rules, a 228-foot Oceanfast that golfer Greg Norman took delivery of two years ago and recently sold—it will be rechristened Floridian—is expected to spend the coming winter in the Caribbean, where it will be available for $320,000 a week. Like many of his peers, Aussie Rules’new owner seems less concerned with limiting the ship’s exposure to the elements than he is with enjoying his boat close to home and increasing its exposure to charter brokers.

Rather than making these vessels available in the waters that they were designed to explore, many owners are placing them in traditional cruising locations to ensure that charter brokers can see them and then recommend them to their clients. They anchor the vessels in popular ports and industry boat shows, where dozens of brokers can visit them. The alternative would be to fly brokers to exotic locales to visit the ships—a far less efficient means of promoting the vessels. “[A typical expedition yacht] is very hard to sell,” says Jenni Monds, who handles charter marketing for Fraser Yachts Worldwide’s Auckland, New Zealand, office. “A lot of brokers won’t book a boat they haven’t seen.”

Many brokers are also reluctant to send clients to waters that they have not explored firsthand, and perhaps most significant, some owners have found that it can be difficult to operate expedition yachts in remote locations: Captains usually are not familiar with waters, and crews must restock the ships through unfamiliar suppliers.

Regardless of where the yacht is based, charter operators, and therefore the ship’s owner, must contend with what in the audio-video industry is known as WAF: the Wife Approval Factor. “The women know the Feadship look, and so they have to be convinced that these really are good boats,” explains Jan Henry, a broker for Fraser Yachts Worldwide. She says that the requests she receives for expedition charters usually come from thrill-seeking men in their 30s to 50s. Before discussion of exotic itineraries begins, their wives have to be convinced that the expedition yachts offer the same level of luxury as a Feadship or any other superyacht. (It should be noted that Feadship recently delivered Andiamo, a 139-foot expedition-style yacht, the first of its kind ever built by the Dutch company.)

Such convincing is not a difficult task. An expedition yacht is a workhorse, but except for its exterior, it resembles a lady of leisure. Staterooms are plush, and saloons are spacious. In fact, because expedition yachts usually have wider beams than traditional yachts, the interiors are often more voluminous. The owner’s deck aboard Giant has a bar area that is 24 feet wide and 16 feet long. The surround-sound flat-screen entertainment system that greets guests aboard Pangaea, a 184-foot Halter Marine completed in 1999, features a 42-inch plasma display, while each stateroom is equipped with 34-inch flat-screen televisions. Still, these ships’ appearances, viewed from the shore, can be deceiving. “A lot of these look like freighters,” says Tim Nelson, a broker with Florida-based Seven Seas Yacht Charters who specializes in the 100-foot-plus market. “They’re keyed for people who want to get out and do stuff but with high-quality food and luxurious accommodations at the same time.”Those who charter these expedition yachts indeed will find plenty to do, albeit in less-than-remote locations. The sprawling deck space allows for more toys than virtually any traditional motor yacht can hold. Giant, which is scheduled to cruise back across the Atlantic to the Caribbean this fall, comes with a pair of 40-foot sportfishers, and it includes a helicopter pad and a garage large enough to house a Bentley and a Durango. Senses, which is expected to continue cruising the western Mediterranean year-round and can be chartered for $240,000 per week, carries a 42-foot Nelson launch, a 28-foot Herreshoff sloop, and a 14-foot catamaran.

As much as either ship has to offer, neither allows charter passengers to take advantage of the extended-range capabilities that truly distinguish it from other superyachts. However, a handful of choices do exist for those who want to enjoy an expedition yacht in its proper context. Flinders, a 163-foot former hydrographic naval ship that was renovated in 2004, is beginning a two-year circumnavigation. The boat, which features a small swimming pool with water resistance in case guests want to do laps in colder climates, is scheduled to visit East Asia and Indonesia in late 2005 and early 2006. Likewise, Pangaea, which was intro­duced to brokers at boat shows, is being put to its intended use; the owner is making the boat available in the South Pacific, a region where few charter boats operate. Pangaea carries a 36-foot sportfisherman with a tuna tower and a fighting chair, and the yacht’s deck doubles as a half-court basketball surface. Revelation, a 180-foot expedition-style yacht built by Zeigler Marine and refitted in 2003, spent last summer in the Galápagos for $98,000 per week, becoming the first non-Ecuador-flagged motor yacht to charter in the region in more than 15 years. “From the day, actually from the hour the permit was in place, we had charters for the boat,” says Revelation’sowner, Dan Stabbert. “One or two of our clients said, ‘We’ve been waiting for years for a proper boat to go there.’ There was a lot of interest, and there continues to be a lot of interest.”

Owners of other expedition yachts who have plans to charter their vessels no doubt are watching the journeys of Flinders and Pangaea, and if they attract enough bookings, yachts that were relegated to the Caribbean and Mediter­ranean may begin to branch out, especially if charter clients demand that they do so. “Quite frankly, I don’t know of any expedition yachts that were out there even five years ago,” Henry says. “The general public hasn’t really been educated about the many aspects of these boats that would be so attractive on charter.”