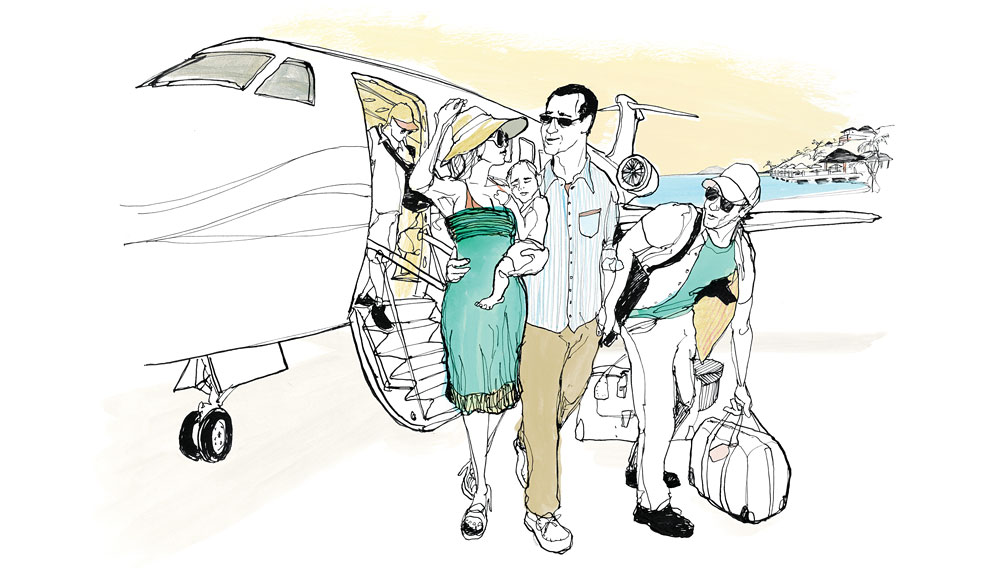 Last february, while sailing off the coast of Oman, Jean and Scott Adam of Marina del Rey, Calif., were taken hostage by pirates. The couple’s 58-foot yacht, on which they had been navigating the world since 2004, was soon tracked down by four U.S. warships, but the Adams were shot to death by their captors moments before Navy SEALs boarded the vessel.

Seven months later, in Kenya, pirates believed to be from Somalia stormed the upscale Kiwayu Safari Village beach resort and killed a 58-year-old British man who was attempting to protect his wife. The intruders took the woman hostage, and at press time she remained in the hands of her captors.

Such incidents, of course, remain rare, but according to security experts they reflect a growing trend—and underscore the need for taking extra precautions while traveling. “Many people still think there has to be a reason before somebody’s going to kidnap them,” says Karl de la Guerra, president and cofounder of International Protective Services Institute/Metro Special Police, a Charlotte, N.C.–based operation that provides international executive protection and training. “I’ll give you a few reasons: You’re an American. You have money. You’re aligned with an organization that has a large bank account. That’s reason enough. A lot of people say, ‘I’m nobody; nobody’s going to kidnap me.’ I beg to differ. The statistics speak differently.”

One troubling statistic: At the end of 2011, according to the International Chamber of Commerce’s Maritime Bureau, there were 11 vessels held by Somali pirates alone, with some 194 hostages still waiting to be released. And while most of these cases represent commercial ships, attacks are increasingly aimed at civilians—and have migrated from sea to shore.

In October, just three weeks after the incident at Kiwayu Safari Village, pirates dragged a disabled 66-year-old French woman from her beachfront vacation home in Kenya’s Lamu archipelago. She died in captivity days later. Private planes have also been targeted, including a 2009 incident involving an Idaho businessman and his family as they were boarding their six-seat Cessna on a rural airstrip in Baja California. Thieves pulled a car in front of the aircraft, forced the family out at gunpoint, and stole their plane, presumably for drug-running endeavors. No one was harmed.

“Anyone traveling in high-end style, meaning pleasure yachts and private planes, is going to be tracked and watched by these people,” says de la Guerra, whose firm is among a growing number of companies specializing in bespoke travel-security services. These firms cater to global corporations with employees in high-risk zones, but they also serve high-net-worth individuals traveling for business and pleasure. Their services include everything from consulting and threat assessment to providing specialty agents who complement a client’s current bodyguard detail while traveling. The firms even go so far as to make all travel arrangements and assemble an entire staff—drivers, pilots, captains, crews—trained in countersurveillance and escape-and-evasion techniques, ensuring a client’s safety and comfort while on a yacht, in a plane, in a car, or by the pool at a beachfront resort.

Indeed, says de la Guerra, private-travel security is not just for sailors off the coast of Somalia. Many of his clients are individuals who simply want to ensure a smooth trip with no surprises, and might include a financier mixing business with pleasure in Rio de Janeiro or a celebrity vacationing with family in the African bush. Travel-security firms also work with yacht charter brokers and private-aviation providers when those companies require extra protection for their clients.

For a typical full-service client, a travel-security firm would provide a handpicked team made up of former military and law-enforcement specialists. For private air travel, de la Guerra likes to tap former members of the Ravens, an elite U.S. Air Force unit specially trained to protect aircraft under hostile conditions. In addition to piloting, these agents can sweep aircraft ahead of time for suspicious devices, provide 24/7 protection on the ground, and consult on a variety of technical issues. For yacht travel, former members of the Navy, Marines, and Coast Guard make ideal close-protection officers, or CPOs. But agents with more eclectic backgrounds are also available.

“There are all sorts of people who change careers and decide to become a close-protection officer,” says David Allison, managing director of Octaga Security Services in Hereford, England. Allison, who previously served on Her Majesty’s Special Forces, says just about anything—a chef who can throw knives, a masseuse trained in countersurveillance techniques—can be arranged.

In fact, it is the “gray man” or “gray woman” who makes the best kind of personal-protection officer, or PPO, the most experienced CPO on a team. “They blend in,” Allison says of the PPO, who shadows the client at all times. “If it’s a black-tie event, they wear black tie. If the client is going to a beach, the PPO is wearing shorts and a T-shirt. The classic scenario—and I hate to use this old adage, but people can relate to it—is Kevin Cost­ner in The Bodyguard. He’s discreet. He can advise at the highest level. And he has the aptitude to speak the local dialect. He won’t offend the host nation and bring embarrassment to the client, because he has done his homework.”

That homework begins long before a trip occurs and typically involves an extensive threat assessment of the locales to be visited, as well as a background check on the client. “We’re not questioning their validity, but we need to know if there are any security concerns surrounding them,” de la Guerra says. For instance, a client’s religious views may be cause for special considerations. “If they’ve brought attention to themselves because of their views—especially negative comments about Islam—then they are at high risk in certain countries,” Allison explains.

Once the travel itinerary and background checks are under way, the next step is to send a security advance party to recce each location in a well-choreographed-but-discreet dance. “If the client wishes to go to a theater, for instance, you’ve booked the best seats, you’ve liaised with house security, you know the exits and entry points—at all times you’re planning ahead,” Allison says. “And in each location, you have contingencies built into your plan. Your driver has already taken all the planned and alternative routes in case there are traffic accidents or he needs to perform evasive action. He has to know the streets like a local.”

Prior to travel, the client receives a dossier with background information (and sometimes photos) for each agent on the team. Once the trip begins, this team, in addition to protecting the client and his or her family, is tasked with anticipating every potential faux pas (a sleeveless dress in a Muslim country), mishap (a child slipping by the swimming pool), or pesky annoyance (a client no longer wishing to sign autographs and needing to be ferried away) so that the travelers can focus completely on enjoying their vacation.

“You really have to have a servant’s heart, because oftentimes we’re doing more than just security,” says Richard DeLong, president of General Security Service in Wilmington, Calif., and a 20-year veteran of the industry who previously guarded a Saudi royal family. His vice president, Fred Wilson, agrees. “I once traveled with a very famous rapper to an awards show,” Wilson says. “We get back to where he’s staying, and he sends me out for fried chicken. Then he decides he needs a few hours to himself, so he has me take his children to a party. You have to have a certain personality for this work—and not too big of an ego. Because sometimes you have to babysit and pick up fried chicken.”

Tending to a client’s health is another issue of constant concern. “All of our agents are CPR- and advanced first aid–qualified, including some who are EMTs,” says DeLong. “And they bring a very advanced trauma bag.” Such a bag might contain medications, antibiotics, and antiserums to treat various infections, as well as IV fluids to support and sustain life in an emergency.

“With a high-end private individual, there’s more of a probability of your client tripping on a stage while making a presentation than for them to be caught in a violent act,” says de la Guerra. “So while we have to train and prepare ourselves for the extreme events that might occur, we also have to stay grounded to the needs and concerns facing our clients right then and there.”

Those needs are often of the quick-fix variety, requiring little more than a nuanced understanding of local customs. “I hear this phrase more than any other,” de la Guerra says: “ ‘reasonable and customary charges.’ For example, you’re on a private plane at a foreign airport. Customs comes out and says, ‘This is going to take quite a while, we’re short one person.’ Your response? ‘Yes, we understand: Clearly this was an error on our part. How may we assist? What can we do to take care of the reasonable and customary charges for this situation?’ The fees are paid, and suddenly our issue is resolved.” Which is why good agents carry about $1,000 worth of local currency—called an E&E (escape and evasion) fund—to mitigate events that might put a crimp in a client’s day.

Finding good agents and the right travel-security provider is a matter of research. “Make sure it’s a licensed company, with adequate experience and insurance,” says DeLong, whose company also works with two providers of ransom insurance, paid out in the event of a kidnapping. “And do a background check to see if they have any civil suits against them or have been fined for not having a proper license. A lot of companies are in existence until they get sued, then they close shop and open up under another name.”

Finally, do not be swayed by the cinematic cliché of what a bodyguard should look and act like. “There’s a Hollywood version of who we are—gun-slinging global protectors,” de la Guerra says. “But at the end of the day, we’re there to provide our clients peace of mind so they can focus on their personal priorities.”

The following firms are among a growing number of specialists offering private security services to individuals traveling for business or pleasure.

Specialties: Executive protection and security consulting; working with film studios to provide personal protection for talent on location and at awards shows and public events.

Cost: Starting at about $1,000 per day, per operative, not including lodging and meals.

Cost: Based on needs and threats; can range as high as $10,000 per day for a single security escort for a private vessel in pirated waters.