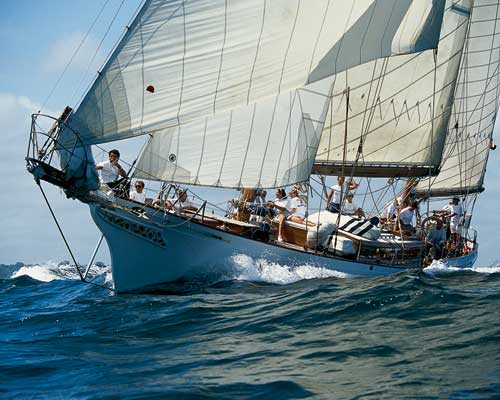 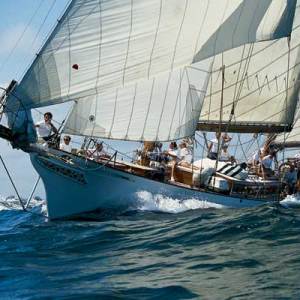 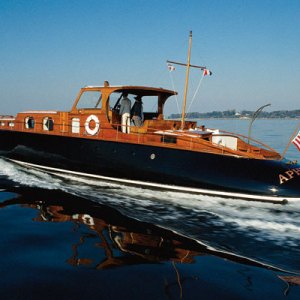 When Paul and Chrissy Kaplan first saw Santana in 1997, the 63-foot schooner barely resembled the proud vessel that Humphrey Bogart once called his own. “Bogie’s Boat,” which the actor had raced in the 1940s and 1950s and employed to host the likes of Lauren Bacall, Richard Burton, Frank Sinatra, and Ingrid Bergman, was raised that year from the bottom of San Francisco Bay, where it had sunk because of a failed bilge pump. With its interior completely ravaged by salt water, Santana seemed damaged beyond repair.

Kaplan, president of Keefe Kaplan Maritime, a Point Richmond, Calif., shipyard, remembered Santana in its prime, when the vessel was the star of San Francisco’s St. Francis Yacht Club. While he barely recognized Santana when it was recovered, he still felt an attraction toward the vessel.

“When we stepped aboard, there was never any debate as to whether this was something we should do,” he recalls. “We just knew this was an incredible opportunity to restore this fabulous vessel.”

Kaplan had succumbed to the restoration bug, afflicted with the compulsion to spend several years and thousands—if not millions—of dollars rescuing an otherwise doomed ship that will, when brought back to its original condition, stand out amid a sea of white fiberglass yachts. “Restoration has become very popular in the last 15 years,” says Mitchell Gibbons-Neff, president of Sparkman & Stephens, a New York yacht design firm that also helps owners restore old vessels. “Sailing a restored classic yacht is like showing up to an event in a Rolls-Royce, but the yacht usually has a much more involved history. Europeans tend to lust after our boats, so many top ones have been shipped to Italy or the U.K. for restoration. But we’ve seen more Americans restoring the classics as well.”

Following 20,000 man-hours of work, Santana was relaunched in 1999. Kaplan’s craftsmen had overhauled the interior completely, installing a flat-screen TV and a nine-speaker stereo system in the cockpit. “It’s really cool to watch Casablanca in surround sound,” Kaplan says. “We’ve been able to preserve the schooner’s character, but we haven’t denied ourselves the toys and amenities that exist today.” Like many others who have restored historically significant yachts—icons such as Dorade, Circe, and Comet also have been saved from the scrap heap—the Kaplans view themselves as trustees of an artistic masterpiece. “Chrissy and I feel more like Santana’s custodians than her owners,” says Kaplan. “We believe we must do right by her until we pass her to the next owner.”

Endeavour, a 130-foot steel-hulled sloop, also belongs to this rarefied class. The boat was commissioned by Sir T.O.M. Sopwith in 1934 and raced in J-Class competitions. By 1983, however, the vessel had been reduced to a rusting hulk at a seaplane base near Southampton, England, too fragile to be moved lest it crumble into powder. In such a state did Elizabeth Meyer, a Rhode Island resident and sailing enthusiast, discover the sloop. “Sailors tend to feel about J-boats the way climbers feel about Mount Everest,” Meyer says. “I saw Endeavour—even though there was very little left of her—went mad, and bought her. I believe preservation is instinctive. It’s natural for us to want to preserve old houses, cars—and, yes, yachts.”

During the five-year, multimillion-dollar restoration project, Meyer moved to England, constructed a building over the remains of Endeavour, and hired welders to repair the steel frames and hull plating as well as build the missing keel and rudder. The boat was eventually towed across the English Channel to Holland’s Royal Huisman shipyard, where craftsmen constructed the mast, boom, and rigging and completed the 1930s-era interior created by designer John Munford. “It was an incredible undertaking for the time,” says Meyer. “We had to custom-build the blocks and hardware as well as fabricate the 165-foot mast and boom.”

When relaunched in 1989, Endeavour became the world’s largest sloop, a sleek, powerful presence that carried more than 9,000 square feet of sail.

The craft raced against Shamrock V, another J-Class yacht that Meyer had helped to restore, and sailed thousands of miles to Europe, South America, and even to the Arctic Circle. In 1999, Meyer sold Endeavour to former Tyco chairman Dennis Kozlowski for $15 million. “I could never afford that boat because she represented about 95 percent of my net worth,” says Meyer. “But I was furious about having to sell her. She was the apple of my eye.”

Many owners refer to their yachts with similar terms of endearment—“Boats are an affair of the heart,” says Gibbons-Neff, “not an investment”—but when speaking of restored classics, their descriptions often include elements of reverence and awe. “She was one of the fastest boats ever built,” Ed Kane, a 55-year-old Massachusetts resident, says of Bolero, a 74-foot yawl he purchased and restored. “There’s a lot of history I felt needed to be preserved. Beyond that, she’s a magnificent work of beauty.”

Bolero, according to Gibbons-Neff, was the “biggest deal to hit the water” after World War II. Built for John Nicholas Brown, then undersecretary of the Navy and vice commodore of the New York Yacht Club, Bolero was constructed of double-planked cedar and mahogany laid over white oak frames. But the real technological breakthrough involved Bolero’s aluminum masts, the first on a sailboat of its size. Considered the finest ocean racer of the time, Bolero held the Newport-Bermuda race record for nearly two decades and was the flagship for three major yacht clubs in the United States and Europe.

But by 1989, Bolero was in tatters, languishing in a weed-ridden Florida canal and stripped of every piece of gear after its owner had fallen into debt. In 1992, Gunter Sunkler, a Maryland businessman, rescued Bolero, buying back as much equipment as he could find and restoring the boat’s topsides and interior. In 1999, Kane purchased Bolero and repaired the hull, which took two years instead of the six months that was originally estimated. Hans Zimmer, a shipwright at Pilots Point Marina in Westbrook, Conn., added a new stem—shaped from a massive oak he discovered deep in the woods of Connecticut’s Litchfield County—and replaced the mahogany planking under Bolero’s waterline. Kane also installed modern electronics in the cabin, though discreetly behind panels to maintain Bolero’s original appearance. Kane, who had previously restored a 1926 60-foot Herreshoff-designed yawl, visited Zimmer’s yard every two weeks to monitor the progress. “I used to get up and crawl around inside the hull to see how it was going,” he says. “I couldn’t wait to get her out on the water.”

For some owners, the thrill lies in the search for and discovery of a historic boat and its subsequent restoration, but for others like Kane, the ultimate reward is sailing the vessel. “I’ve never had a bad day on Ticonderoga,” says owner L. Scott Frantz, who often races against Bolero at classic regattas. “It’s a wonderful feeling to get behind the wheel and know that virtually every great American sailor has been on this boat.”

Frantz remembers when he was 6 years old, sailing aboard his father’s 82-foot Rhodes ketch in Newport, and looking across the water and seeing Ticonderoga in action. “Every time we raced her, we got passed,” says the 44-year-old venture capitalist. “Even at 6, I knew she was something special.”

When Ticonderoga—which originally was christened as the 72-foot ketch Tioga in 1936—officially retired from racing in 1967, it held more than 30 elapsed-time records for major sailing events. The yacht raced and cruised in the 1930s, served in World War II as a coastal patrol boat, and then went through a series of owners before Frantz purchased it in 1993. Frantz had expected to do a major restoration, but he was pleasantly surprised to find that “Ti” needed only cosmetic work; he estimates that the boat has retained half of its original wood. Four years before Frantz acquired Ticonderoga, England’s Southampton Yacht Services had completed a major restoration. “She’d been pushed very hard at the height of her racing days,” says Tom Reardon, who has skippered Ticonderoga for 18 years. “The bottom of the boat was falling off, and they had cleared out the interior with sledgehammers to make her light for racing.”

Frantz has maintained the boat’s prewar appearance, forgoing elaborate electronics (though he did compromise with his children by installing a DVD player behind a cabinet). “Electronics can clutter up the helm,” says Frantz, noting the presence of a 1949 compass. “We use paper charts and dead reckoning—and occasionally celestial navigation—as much as possible.”

Under way now is a restoration on Aphrodite, a 74-foot motor yacht built in 1937 for financier John Hay Whitney to commute from his Long Island home to Wall Street. Aphrodite regularly transported Henry Cabot Lodge and Henry Ford II and carried film stars such as Fred Astaire, Laurence Olivier, and Shirley Temple, who celebrated a birthday on board. But by 2000, the boat was languishing in Florida. “Once my boss discovered the boat, he realized how fragile it was and that it probably wouldn’t survive,” says Kirk Reynolds, the boat’s current captain. “When he heard its history, he felt he just couldn’t allow that to happen. He bought the boat two years ago.”

Aphrodite’s new owner, a Rhode Island businessman, has a history of rescuing antique powerboats: He has five in his collection, including a 35-foot tender from J.P. Morgan’s Corsair. But Aphrodite has proven to be more than a simple restoration. It needed a multimillion-dollar structural overhaul that has required 26,000 man-hours over the last two years. “We saved whatever we could from the original boat,” says Steve White, who runs the Brooklin Boat Yard in Brooklin, Maine, where the project is taking place. “There was a lot of original hardware, but not much else. We had an original deck plan and a couple of section drawings, but most of the plans were lost.”

To preserve the original design, White’s crew disassembled, photographed, and measured each piece of the boat so that new drawings could be made and new components fabricated. But instead of riveting mahogany planks as builders did in the 1930s, White’s team glued them for added rigidity and strength—one of the modern compromises every wooden boatbuilder now makes when restoring a hull. Also, because Aphrodite’s original 2,000 hp Packard engines were so volatile that you would not start them without having a fire extinguisher in hand, White says, a modern diesel will be installed that will give the boat a top speed of 45 mph.

Such measures make restoration of a classic yacht a more expensive proposition than commissioning a comparably sized new fiberglass vessel—and, depending on the extent of damage, even more costly than building a full-scale replica. Nevertheless, every owner regards his or her classic yacht as an irreplaceable treasure. “There will never be another Ticonderoga,” says Frantz, noting that whenever he pulls into a port, his yacht attracts sailors eager to relay stories of sailing on Ticonderoga in its glory days. “No boat will ever duplicate her history. She is unique, one of a kind.”