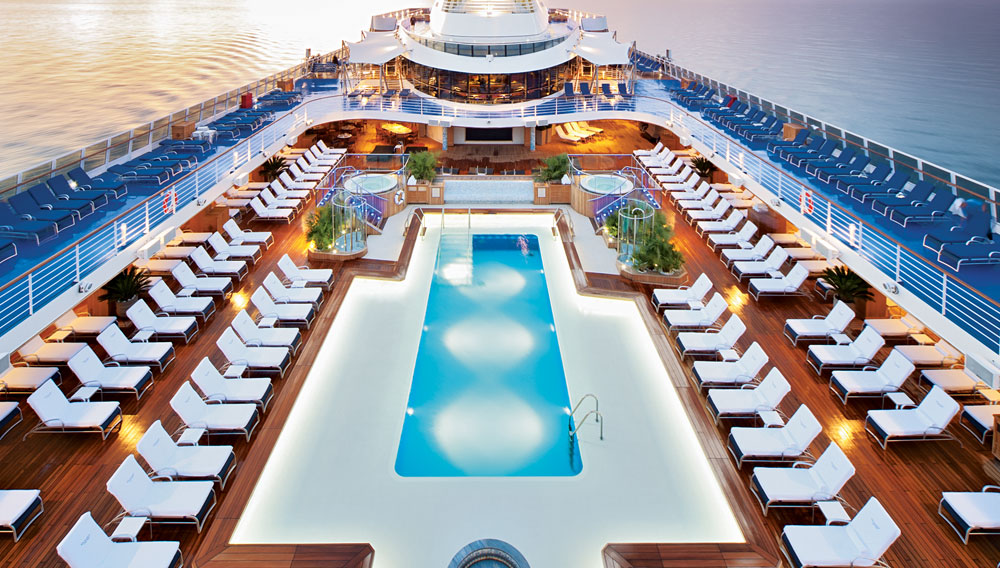 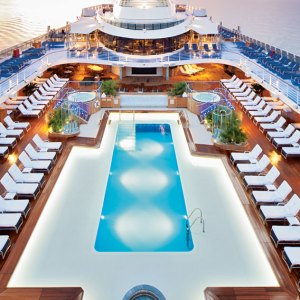 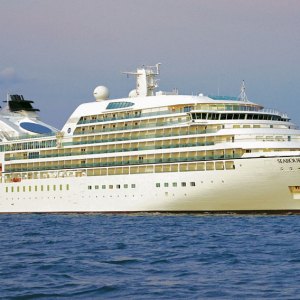 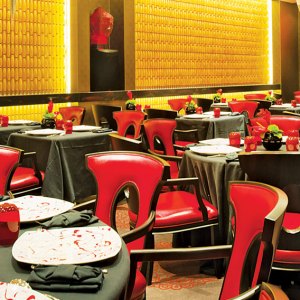 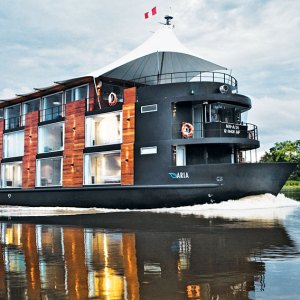 Generations have passed since cruise ships were high-society affairs that called for black ties and ball gowns. Rather, at some point in the mid-20th century, cruise liners cast aside galas and gourmet cuisine in favor of all-you-can-eat buffets and waterslides. Hyperbolically named ships like Majesty of the Seas and SuperStar Aquarius began dumping thousands of passengers in crowded harbors, where they crammed into buses for group tours before being herded back to their berths.

There were exceptions, of course—a small group of exclusive ships that catered to discerning seafarers. In recent years, this concept has picked up steam, with a number of cruise lines debuting higher-end—and lower-density—vessels with swanky new features. No longer just for the recently born or soon-to-die, amenities and diversions include full-service spas, wine tastings, private shore excursions, staterooms created by leading interior designers, and restaurants helmed by celebrity chefs.

Ports of call have also become more inspired, with ships bypassing standard stops for insider destinations that are inaccessible to larger ships. Whether plying the Mediterranean Sea or floating down the Amazon, the following eight ships—each either recently launched or soon to debut—prove that luxury is definitely not dead in the water.

When Riviera embarked on its maiden voyage from Venice to Athens last May, the 1,250-passenger liner was dressed for success. Fashionable features aboard Oceania’s latest cruiser include signature staterooms with Ralph Lauren Home furnishings, a museum-like collection of original artworks that spans several private commissions, and a grand staircase created by Lalique. Amenities follow suit, ranging from a Canyon Ranch spa to a theater that hosts Broadway-caliber productions.

Riviera’s exquisite taste is most on display at the ship’s 10 restaurants, which include Jacques, a bistro by French chef Jacques Pépin, as well as a private dining venue with wine-pairing menus designed by onboard sommeliers. Further enticing gourmands are Riviera’s culinary discovery tours, which take place in select ports such as Barcelona and Istanbul. The excursions lead small groups through local markets in search of ingredients and wines to incorporate and imbibe during private cooking classes at the ship’s culinary center.

The numerous attractions aboard Seabourn Quest include two swimming pools, six whirlpools, an 11,400-square-?foot spa (currently the largest on any luxury vessel), four restaurants, and six bars and lounges. Rather than a megasize liner, however, the 650-foot, 450-passenger Quest—where Hermès bath products await in staterooms

and images by Herb Ritts, Richard Avedon, and other 20th-century fashion photographers adorn the concierge lounge—feels like an oversize private yacht.

Launched in summer 2011, Quest features one of the highest crew-to-passenger ratios on the seas. The ship’s low density and relatively diminutive dimensions mean that it can stop in less-traveled ports that are inaccessible to larger vessels. On its 116-day world tour, which will embark in January, Quest will visit off-the-beaten-path destinations including Thursday Island in Australia, Komodo Island in Indonesia, and ports in the hearts of Ho Chi Minh City and Bangkok.

The Amazon is an outlier in the cruising world. The pace is slow on this little-traveled route, and total immersion with wildlife—three-toed sloths, pink Amazon dolphins—is the main attraction. Amid these wild surroundings, Aqua Expeditions’ newest ship, M/V Aria, offers an implausibly refined experience.

The second ship from the four-year-old Aqua, the 145-foot Aria is a sleek, modern vessel with just 16 staterooms. Floor-to-ceiling windows in each room afford views of the passing river, estuaries, backwater lakes, and rarely visited reserves such as the Pacaya-Samiria. Twice-daily skiff launches led by expert guides (many of whom grew up near the river) offer deeper interactions with the more than 5-million–acre reserve. Back aboard, guests can enjoy gourmet meals designed by the Peruvian chef Pedro Miguel Schiaffino, relax on a teak observation deck, or sip pisco sours in the lounge. A nearly one-to-one crew-to-passenger ratio ensures that no one’s drink ever gets too low.

The German cruise operator Hapag-Lloyd has been earning accolades for its top-of-the-line ship, MS Europa, for more than a decade. But the company has remained mostly anonymous in the American market, largely because of its lack of English-speaking itineraries. That should change next year, when Hapag-Lloyd unveils a bilingual—and decadent—new ship.

Featuring all-suite staterooms—including a dozen spa suites equipped with whirlpool tubs and private steam rooms—the 739-foot, 516-passenger MS Europa 2 promises to combine the intimacy of small ships with the amenities of large liners. The culinary offerings will include six bars, eight restaurants, and a cooking school equipped with Miele appliances. Any overconsumption will be countered with a wide variety of health and wellness programs, ranging from personal trainers and Pilates classes to a 10,000-square-foot spa with a Thalassotherapy pool and sauna.

Europa 2 is scheduled to set off on its 14-day maiden voyage from Hamburg to London in May. On subsequent itineraries, passengers will have the opportunity to visit less-traveled ports, including Portofino and Bonifacio, that remain inaccessible to larger ships.

Following a $65 million redesign that spanned five years of intermittent dry-dock renovations, Crystal Symphony emerged in June with a dazzling new look from its pool decks to its penthouses. Upgrades to the ship’s public spaces range from the hand-tiled mosaics and Murano glass lamps in the Palm Court to the black Nero Marquina marble and Bose and Meyer Sound Laboratory technology in the newly designed theaters. Each of the 922-passenger ship’s staterooms has also been updated, with penthouse suites now featuring floor-to-ceiling windows and Philippe Starck–designed bathtubs.

Symphony’s pool area now includes new teak decking, updated furnishings, and a retractable roof. Also new is the ship’s Local Insights program, which brings aboard experts specific to each destination. Beginning this fall, European itineraries will feature an architect for stops in Barcelona, an archaeological diver while docked in Bodrum, and a Titanic expert during visits to Belfast.

The Rhine—one of the most commonly cruised rivers in the world—welcomed its most luxurious ship last year when Uniworld introduced the 160-passenger S.S. Antoinette. Dubbed a “super ship,” the vessel is teeming with over-the-top details, from the riverboat world’s first 3-D movie theater to the 10-foot Baccarat chandelier (originally from Manhattan’s famed Tavern on the Green restaurant) that serves as the lobby’s focal point.

In Antoinette’s staterooms, handmade beds from Savoir of England pair with Louis XV–style furnishings. Each room includes a balcony, and suites are attended by private butlers.

In between stops to villages along the Rhine, guests can count the passing castles from the 443-foot ship’s sundeck or from the heated indoor pool (with floor-to-ceiling retractable windows). Other popular onboard retreats include a French bistro and the Serenity River Spa.

Scheduled to hit the water this winter, the 90-passenger Paul Gauguin M/V Tere Moana will be one of the world’s smallest transatlantic cruise ships. The vessel, the second from the Washington-based Paul Gauguin Cruises, will spend its summers in the Mediterranean and winters in the Caribbean and Latin America, stopping along the way in oft-passed-over ports such as Montenegro, St. Barts, and Cartagena, Colombia.

In a nod to its predecessor, the South Pacific–sailing M/S Paul Gauguin , the Tere Moana will feature tropical touches throughout, from Polynesian artworks to the Balinese beds lining the outdoor pool. Amenities will include a French restaurant conceived by Michelin-starred chef Jean-Pierre Vigato, as well as a piano bar, a spa, a fitness center, and a water-sports marina.

Tere Moana’s maiden voyage, which embarks in December, will include stops in St. Kitts, Nevis, and the British Virgin Islands.

With ships like Silver Spirit , Silversea has long been a leader in luxury cruising, known for its stellar service and exotic itineraries. Next year the company plans to launch its smallest liner yet—a 289-foot, 100-passenger expedition ship—in what could prove to be its most coveted destination: the Galapagos Islands.

The as-yet-unnamed ship—an existing vessel that Silversea acquired and is refitting toward the end of 2013—promises to be the most upscale cruising option ever in the storied archipelago. Silversea has not revealed details about its renovation plans, but the current ship features 50 ocean-view suites plus a restaurant, two bars, a library, two whirlpools, and, of course, an observation deck for viewing wildlife.