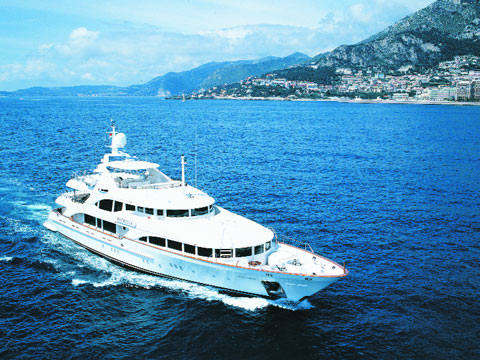 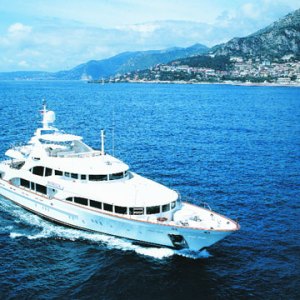 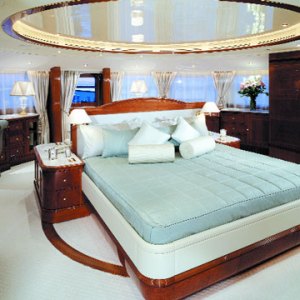 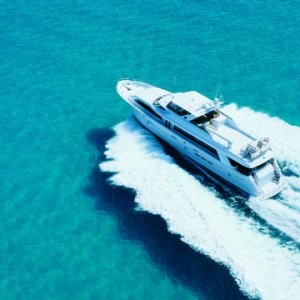 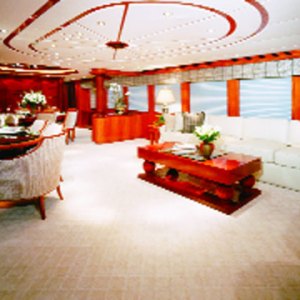 Several years ago at the Fort Lauderdale International Boat Show, Ben Price, a Sarasota, Fla., resident, spent six long days walking the crowded Florida docks and speaking with boatbuilders, both custom and semicustom, about creating a new yacht. Price, who owned a 55-foot Sea Ray, had specific requirements. He wanted a larger yacht that would cruise at approximately 20 mph, have a top speed of 35 mph, boast exceptional quality and reliability, and be ready within a year. “Only about six of the builders fit my criteria—three of them custom builders, three semicustom,” Price says.

After weighing his options, Price chose Lazzara Yachts to build a 94-foot semicustom yacht, which was delivered within a year. He named his yacht Impulse, but his decision to commission Lazzara to build it was far from spontaneous. “I originally spoke to custom builders, but decided I did not want to make every tiny decision about the boat myself,” Price says. “Going totally custom certainly means you can have anything you want, but you have to tell them what you want. I do not have the time or the desire for that. I wanted someone else to make most of the decisions, and then allow me to pick and choose some of the finer details that matter most to me.”

Ten years ago, a yacht client such as Price would not have had the luxury of such a choice. For the level of detail he desired, he would have had to hire a custom builder and possibly endure a four-year wait with a surfeit of unanticipated costs, and still face the potential of a finished product that differed from the original sketches. Today, boaters can order a semicustom yacht and take delivery within a year.

“Even though there are owners who find the new-build process very exciting and rewarding,” says Burger Boat Co. President David Ross, “there are also a growing number who seek instant gratification or, at the very least, seem comfortable letting a shipyard with the stature and reputation of Burger make the decisions.”

The common perception is that custom yachts are of a higher quality than semicustom or production boats. But step aboard Patricia, one of Benetti’s 145-foot Vision Series semicustom megayachts (named after the vessels’ large windows and expansive views), and this belief will quickly be dashed. The yacht’s signature feature is a private terrace on the foredeck, where Patricia’s owner can relax with a guest without being spotted by anyone on the boat or on the shore.

The master bedroom includes a bed that rests on a rotating pedestal, with a couch placed at one end of the bed. If you are lying in bed facing the forward windows and wish to watch television on the plasma screen on the opposite bulkhead, simply push a button, and the bed will rotate 180 degrees, bringing you face-to-face with the entertainment system.

“We use the same designer, the same shipyard workers, the same subcontractors, and the same project managers for our new Vision Series as we do for all our custom projects,” says Alexandra Guillard, Benetti’s marketing director. “So when you come aboard one of our semicustom 145-foot Visions, you have the impression that you are on board one of our fully custom superyachts, since the ambience and details of the work are the same as with any other Benetti.”

For many boatbuilders, the duplication and repetition that takes place when building production-line semicustoms actually results in a higher-quality yacht. Doug Nays, project director of North American Yachts & Shipbuilding, says the company spent more than 180,000 man-hours constructing its 153-foot Genesis yacht, the first hull of its Genesis line. The knowledge gained while completing the first hull, which was recently purchased, will make the second Genesis yacht an improved version of its predecessor. “The main thing is that the semicustom is a more tried-and-true product simply from the repetition,” Nays says.

Rich Lazzara, marketing director of Lazzara Yachts, says that building a semicustom yacht requires no more or no less work than a custom yacht. “You still have to design, manufacture, and customize the product,” Lazzara explains. “Just imagine dropping a house into the ocean and making it self-sufficient with a power source, sewage system, and other mechanicals, while at the same time ensuring it will withstand the force of 10-foot seas, which is the equivalent of dropping it off a 30-foot building. If we could sell boats that were all the same, we would do it for cost and efficiency reasons alone. But that is an outdated idea that hearkens back to the days of the old Model T, where you could order the car in any color you wanted—as long as it was black.”

Any customization of a semicustom yacht is not always readily apparent. If you were to align four Hatteras 100-foot yachts in a row, you would notice only subtle differences from one exterior to the next. “However, the interiors of each boat would represent an owner’s personal tastes,” says David Ritchie, Hatteras Yachts’ marketing director.

Hatteras features the Elite Series, its line of semicustom yachts. Elite Series owners cannot tinker with their hulls, but most clients are not as particular about a boat’s superstructure as they are about its interior.

Each Elite Series yacht is completed in approximately 15 months, giving Hatteras owners their yachts relatively quickly following their orders. “There will always be boaters who prefer custom boats, and there will always be boaters who prefer getting the quality they demand in a timely fashion, without compromising in the area of personal taste,” says Ritchie. “We expect that as more and more boaters mature in their boat-buying experience, they will continue to migrate toward the semicustom approach to yachting.”

Semicustom Lazzara clients can also change much of the interior, including the decor, furnishings, and audio/ video systems. Lazzara will even move walls around to create different spaces, as long as the layout does not compromise the yacht’s structural integrity. The company incorporates furniture of modular design, enabling the builders to be flexible and make the customer’s changes without having to redesign an interior from scratch. For instance, nightstands range from 19 to 25 inches to coincide with different bed sizes. “In a customer’s eyes, the interior is what makes the most difference in a boat,” says Lazzara. “This is where clients can put their own style—in the materials, fabrics, furniture, carpeting, and woods.”

The typical client wants to incorporate his own style, but not into every detail of the yacht, says Burger’s Ross. After examining customer surveys and studies that the boatbuilder had conducted, Ross arrived at a clear conclusion. “We realized, among other things, that everyone is looking to simplify their lives,” he says. Ross determined that many clients, while still obsessed with quality and passionate about yachting, were overwhelmed with the amount of time and the number of demands involved in having a custom yacht built, from sculpting the shape of the superstructure to finalizing the equipment used in the engine room.

In response to this finding, Burger recently introduced its new Advanced Construction Series (ACS) semicustom line. “The client is getting an incredibly high-quality, completely finished, turnkey, custom-designed and -built yacht without having to make the time investment or myriad decisions normally required for a full design/build program,” says Ross. “It certainly has a lot of appeal for those who lack the patience or simply do not have the time.”

For novice boaters who want to purchase a yacht, industry professionals recommend that they first charter a boat to learn about the experience. Similarly, if you want a fully custom yacht, a semicustom boat can be an entry model with which you can experience the process of a new build.

Six months after receiving his 94-footer, Price commissioned Lazzara to build a 106-footer—the first in Lazzara’s new line. He wanted the crew quarters aft with a separate entrance, and two personal watercraft that could each hold three people. Price also wanted to access the boat’s navigation system when he was not on the bridge. Lazzara installed the system on every TV in each room, allowing Price to view the radar and navigational information from anywhere on the yacht. “I swore I would never buy a first of anything,” Price says with a laugh, “but I was so impressed with Lazzara that I bought the 106 without the plans. And I am happy I did it.”

As soon as Price took delivery of his new 106-footer—less than a year after he ordered it—he and his wife stepped aboard with nothing but an overnight bag and cruised the Caribbean for two months. “I like dealing with the people who make the decisions,” says Price. For many semicustom clients, this can be preferable to making all of the decisions themselves.