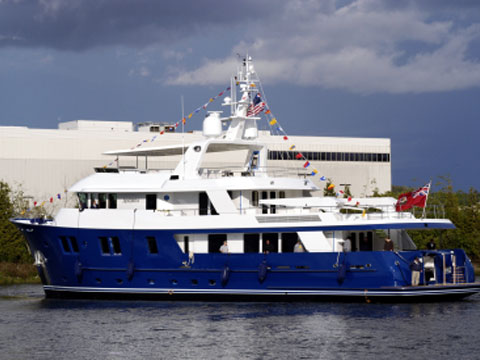 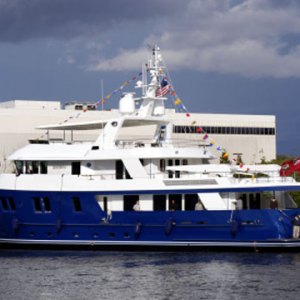 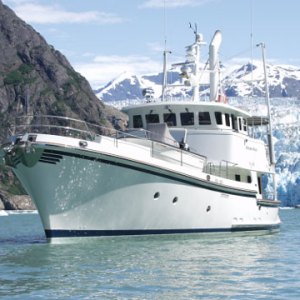 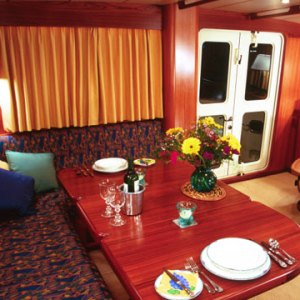 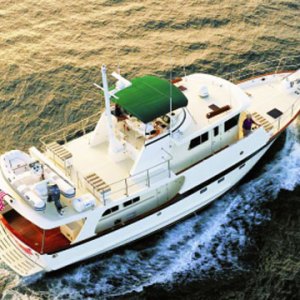 The sight of a commercial fishing vessel usually conjures up images of long hours of arduous labor often conducted in rough weather and always accompanied by the threat of injury. However, Bruce Kessler, a successful television director from Los Angeles, took a different view. For Kessler, the 90-foot tuna boat that steamed past his sportfisher in the Cabo San Lucas harbor one afternoon in the mid-1970s held the promise of independence. With such a vessel, he concluded, you would have the ability to roam wherever and whenever on the open sea.

Having grown up around commercial fishing boats in Seattle, Kessler knew that the tuna boat was better equipped than any pleasure craft for long trips to remote locations, which at the time would have included Cabo San Lucas. With a design that included cavernous fuel and water tanks, large storage areas for food and gear, and an engine room spacious enough for making repairs at sea, the tuna boat was Kessler’s vision of perfection, or at least it had the potential to become perfect. “After I had made a couple of trips to Cabo—which had nothing there, it was an absolutely empty place, you had to be totally self-sufficient—I saw the tuna boat and said to myself, ‘That’s what I need,’ ” says Kessler.

In addition to being substantially larger than Kessler’s 48-foot semidisplacement sportfisher and therefore offering more storage and living space, the tuna boat was a fulldisplacement vessel built to move through the water rather than on top of it as Kessler’s boat did. Semidisplacement boats can achieve faster cruising speeds because of their ability to plane on top of the water, but the streamlined shape required for planing reduces space and stability. While substantially slower than most semidisplacement vessels, a full-displacement boat, in addition to offering more stability and space, also tends to be more fuel-efficient and quieter.

Intent on acquiring a modified commercial fishing trawler, Kessler approached Delta Marine, a boatyard in Seattle that at the time catered to the commercial fishing industry, and described what he wanted. Initially, Delta Marine was reluctant to work with him, but eventually the company produced some preliminary design plans, which Kessler enjoyed sharing with fellow boaters. “I’d always have the plans with me,” Kessler says. “I’d lay them out, and people would look at them and say, ‘You must be nuts.’”

Nuts or not, Kessler got the boat that he wanted in 1985, when Delta Marine launched Zopilote, a 70-foot full-displacement trawler on which Kessler and his wife, Joan, would spend part of the early 1990s traveling around the world. In the process, through a series of newspaper and magazine articles, they and their vessel became celebrities in the boating community. Kessler, now 67, describes the journey as a three-year fishing trip that included stopovers in Fiji, Australia, Bali, Singapore, the Maldives, Djibouti, Cyprus, Gibraltar, the Azores, Bermuda, and the Caymans. “I circumnavigated by accident because it was easy to do,” says Kessler. (It should be noted that Zopilote sank 70 miles west of Ketchikan, Alaska, after striking an uncharted pinnacle in 1994 and was replaced by Kessler in 1997 with Spirit of Zopilote, a 64-foot trawler built by Northern Marine.)

Delta Marine delivered four similarly designed vessels before transforming into a megayacht builder that now offers custom expedition yachts— full-displacement megayachts that, like trawlers, are built for long-range ocean cruising and feature designs inspired by commercial fishing vessels. Delta Marine recently delivered two 126-foot expedition yachts, Sinbad last year and Andrea this summer. Delta Marine’s transformation was fueled in large part by the notoriety that Zopilote received as a vessel in which even amateur mariners could circle the globe. “Bruce took that boat everywhere,” says Michelle Jones, marketing manager for Delta Marine. “People hadn’t seen anything like it before. It started a trend.”

To be sure, Kessler was not the first boater to recognize that with a properly designed powerboat, a novice could make ocean-crossing passages. Robert Beebe, a former naval captain who chafed under the limitations of sailboats, described how to do this in his 1974 book Voyaging Under Power. And although Kessler and Zopilote may have helped to popularize trawlers and the trawling lifestyle in the mid-1990s, Kadey-Krogen, a Florida boat builder, has been making trawlers for recreational boaters since 1976, and Southern California–based Nordhavn has been building them since 1988. Two years ago, to demonstrate the seaworthiness of its design, Nordhavn and its parent company Pacific Asian Enterprises sent one of their 40-foot trawlers around the world. The vessel successfully weathered a typhoon’s 20-foot seas and 45-mph winds in Micronesia and other severe storms in the Mediterranean Sea.

While riding out such storms in a trawler is not enjoyable or comfortable, it can be done safely and without panic, says Donald Obitz, a 57-year-old retired restaurateur who lives aboard Landd Ho, a 58-foot Kadey-Krogen trawler that has often encountered bad weather off the southeast coast of the United States. “We’ve been uncomfortable in bad seas and very bad storms with thunder and lightning,” says Obitz, who shares the captain and crew duties with his wife, Lynn. “But because of the design of the boat, we have never feared for our lives.”

Landd Ho, which Obitz uses to cruise the New England coast in the summers and around Florida and the Bahamas in the winters, includes two staterooms and a business office. The galley is equipped with a full-size gas oven and stove, a microwave/ convection oven, a 22-cubic-foot refrigerator, and plenty of cabinet space for storage. “The boat we’re on really has all the comforts of home,” he says. “There’s nothing you can do at home that you can’t do on this boat.”

Enjoying the trawler lifestyle requires a degree of financial and emotional independence (the base price for a Krogen 58 is $1.6 million, and for a Nordhavn 62 it is $1.7 million), but it does not require people to leave their lives behind altogether. The advent of wireless technology, the Internet, and satellite communications enables trawler dwellers to retain contact with their business interests and with their friends and families. “These people are not dropping out,” says Bill Parlatore, editor of PassageMaker, a magazine that covers trawlers and other oceangoing motor yachts and the people who own them. “A lot of the boats being built today are designed with offices so that the owners can stay in touch with their kids and their portfolios. They can call from Tahiti to California because of the technology.” Parlatore recounts a phone conversation between a grandson and a grandfather, who was on a trawler in the South Pacific. The satellite phone rang and on the line was an 8-year-old calling to tell about the broken leg he suffered while competing in a soapbox derby. “That’s something that couldn’t have happened 10 years ago,” Parlatore says.

While there is discussion in the boating industry about whether semidisplacement vessels should even be categorized as trawlers, some boaters are quite content using them to hug the coastline or motor along inland waterways, Parlatore says. “Most people aren’t looking to cross the ocean themselves; they’re more interested in cruising the beauty along the shore.”

As Parlatore suggests, trawler owners come from different boating backgrounds. One group comprises former sailboat owners who grew weary of waiting for enough wind to reach their destinations, says Ann Caywood. Trawlers also afford former sailors the opportunity to travel along narrow waterways and under bridges without taking down their masts, she adds. Another group of trawler owners includes former speedboat owners seeking a more leisurely and less noisy mode of travel, says Caywood. Of these two groups, former sailboat owners adapt more easily to the trawler lifestyle. “The most successful come into it from sailing,” she says. “They’ve got the experience handling similar boats. They appreciate the effects of wind and current on handling.”

A third group, says Parlatore, consists of people with little or no boating experience who regard the trawler as a means to an end: seeing the world. In the past, this group likely would have been discouraged from purchasing a trawler without first spending several years learning how to navigate such a vessel, but the advent of global positioning system (GPS) technology has made navigation easier to master, says Parlatore. “Operating a trawler is within the skill level of anyone who has reached the level of being able to afford it,” he says. Compared to megayachts, trawlers are affordable, with brokerage trawlers available for as little as $100,000 and new production boats ranging from $400,000 to $3.7 million or more.

More difficult than affording the price of a trawler is affording the time necessary to enjoy the trawler lifestyle. Owners need to spend weeks, even months, at a time onboard to appreciate their boats fully. If you cannot leave the dock until Friday night and have to be back Sunday afternoon, trawling is not for you. “If you don’t have the time to cruise at 7, 8, or 9 knots, you’re going to go nuts just doing weekend cruising,” says Obitz. “You’ll end up going from your home port to the same places over and over because that’s as far as you can get. If you’re retired or semiretired and have the time, now you can cruise and be very comfortable.”

Going hand in hand with an abundance of leisure time is the temperament required for trawling, says Tom Caywood. “Some people can take off for years and years; others can’t slow down. I know an attorney and his wife who did the Great Loop [a route that circles a large portion of eastern North America]. I don’t think they spent more than two nights in a row in one port. Once they were done, they sold the boat, and he went back to work.”