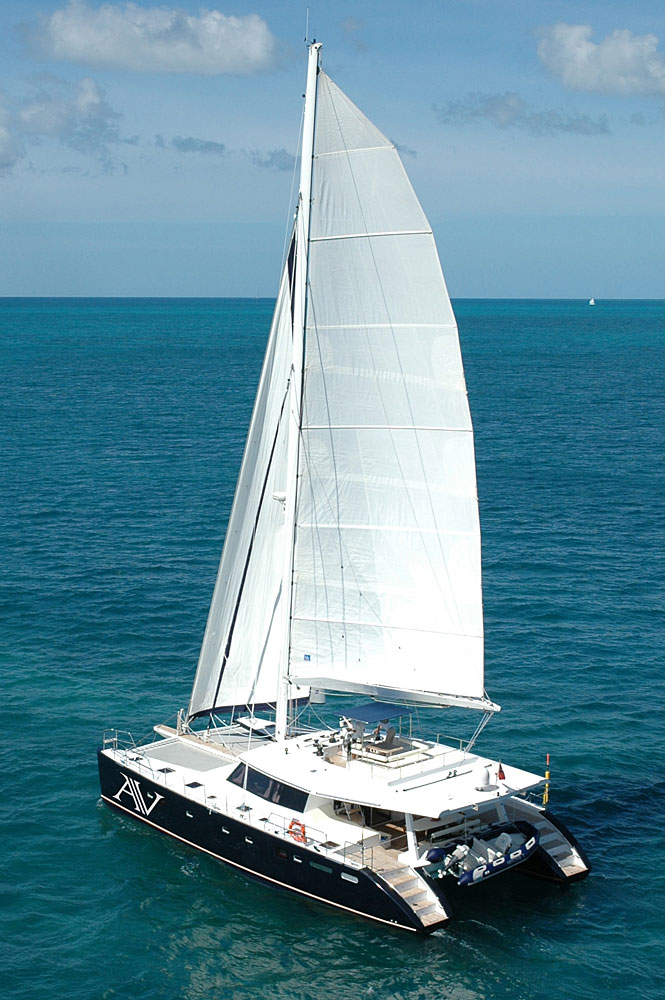 It is 9:30 am, and Johnny Danger is running out of tobacco—or whatever pungent substance fills his hand-rolled cigarette. But it appears that the substance has achieved its desired effect: The burly fellow grins blearily but beatifically. “Nothing better than to start the day with a smoke,” he says. “Or two.”

Johnny Danger—a nickname—splits his time between New Mexico and the Caribbean. When in the latter, he often makes his way to the Leeward Islands, where his friend Bankie Banx has built a restaurant and nightclub called the Dune Preserve along Anguilla’s Rendezvous Bay.

On the beach outside the club, Danger, who is here to help Banx stain some walls in the Dune Preserve, is chatting with me and five other passengers of Argonauta V, a 62-foot catamaran. We just have arrived on shore for a return visit. Dune Preserve was our second stop last night. The first, after a day of snorkeling, was Elvis’ Beach Bar, where some of our party sampled the outdoor establishment’s rum punch and a deadly drink called Mamawanna.

For the past two days, we have been sailing around the Leeward Islands. We spent the night on the boat in Road Bay, on Anguilla’s northern side, and then sailed to Rendezvous Bay, on the south side, earlier this morning to meet again with Banx.

Banx is a musician and singer who has spent a good part of his career in New York. He frequently performs with Jimmy Buffett, sometimes on a stage he has erected next to his club. For about 30 years, he has been writing songs that inhabit a stylistic territory midway between Bob Marley and Bob Dylan.

We proceed to a table in the open-air dining room. The club is a fantastic, multitiered, mazelike structure cobbled together from lumber, driftwood, fragments of wrecked boats, and various found objects, including a broken guitar that has been incorporated into a bar surface. Here and there, tropical plants and trees grow through the floors and pierce the ceilings. Sea breezes blow through the structure at every level. From the dining room, which faces the ocean, you can see the hills of Saint Martin about seven miles away. “Bankie’s been working on this place for years,” Danger explains. “A hurricane wipes it out, and he just makes it bigger and better.”

Banx joins us. A spry, bearded 54-year-old with an imposing mane of dreadlocks, he belongs to a well-known family on Anguilla. One of his brothers is the island’s minister of finance; another is the head of its national bank; and a third is the engineer who designed most of Anguilla’s infrastructure.

“I’ve loved to sail since I was a little kid,” Banx says. “Boat racing is Anguilla’s main sport. When a boat loses too many races, we burn her on the beach.” He gestures at the dining room. “I made some of this club with pieces of boats that we burned.”

The club occupies a stretch of beach between the Temenos Golf Club and the CuisinArt Resort & Spa. West of Temenos, construction sites extend to Anguilla’s western tip. Soon, the Dune Preserve probably will appear out of place amid a soaring white ridge of condos and hotels. For now, though, it is an authentic slice of the Caribbean, alive with island music and redolent of spicy cuisine and other, funkier fragrances.

Like the Dune Preserve, Argonauta V and other catamarans are well suited to the Caribbean; they can be found in virtually every bay. Because of their twin hulls, they do not require a long keel to counter the length and weight of a mast, and so they are ideal for navigating shallow waters such as those around Anguilla.

Catamarans are employed mainly as day boats or as racers here and throughout the world. The best cats have been made in France, but even there, few manufacturers have produced luxury versions. In recent years, a few French firms, including Blubay, Compositeworks, and Nahema, have been building large cats with the amenities and fine finish of superyachts. One of the leaders of this movement, however, is a Polish company, Sunreef Yachts, which a year ago launched Argonauta V.

Two-hulled boats probably are thousands of years old. In the 1690s, the English buccaneer William Dampier, while voyaging around the world, stopped in the Bay of Bengal on the southeastern coast of Tamil Nadu, India. There he saw a vessel that was basically a raft made of logs. “On the coast of Coromandel,” he wrote in 1697, “they call them catamarans. They are but one log, or two . . . so small that they carry but one man.”

The word catamaran derives from the Tamil words kattu, “to tie,” and maram, “wood” or “tree.” Tamil Indians appear to have crossed the Pacific Ocean to Polynesia as early as 3500 B.C., and they may have brought the design with them. In 1778, the English explorer Captain James Cook wrote in his logbook about an enormous, two-hulled sailing craft he had encountered in Polynesia; he estimated that it “could carry a hundred warriors.” He later found that these boats came in many kinds and sizes, including small double outriggers used to paddle from one island to another.

As boatbuilders soon learned, sailing catamarans are fast. Because they lack a heavy keel, they are lighter than monohulls, and because they have a wider beam, they can carry more sail per unit of length. (Trimarans—boats with three hulls—are even faster. See “Big Three,” page 200.) In 1876, a two-hulled sailing vessel called Amaryllis, built by the American naval architect Nathanael Greene Herreshoff, defeated the entire fleet of the New York Yacht Club in a regatta. After the race, the club banned multihulls from monohull races.

Catamarans’ stability makes them dependable long-distance boats. In the 1950s, multihull pioneer James Wharram designed a 23-foot cat called Tangaroa, which he sailed across the Atlantic in 1957. And in the 1960s, David Henry Lewis, a physician, built the 40-foot Rehu Moana, loaded his family into it, and sailed around the world, marking the first circumnavigation in a multihull.

Paradoxically, the speed of catamarans slowed their acceptance by boaters. In the 1960s, a few spectacular accidents during races created the perception that the boats were prone to “pitch-poling,” or flipping over frontwise. Such accidents are rare, however, and usually are caused by pushing the vessels too hard in high seas. These days, cats generally are considered safer to operate than monohulls. And if a cat does flip, its two hulls probably will float, while a monohull, weighted down by its keel, likely will sink.

Nevertheless, Americans have proved slow to embrace the vessels. Sunreef and other cat makers are trying to accelerate the conversion by building models with spaciousness, opulence, sophisticated amenities—and, they point out, efficiency. Cats, because they are lightweight, require less fuel than monohulls do, an important consideration as gas prices soar.

Sunreef began its existence in 1998 as a travel agency specializing in catamaran charters. But when French entrepreneur Francis Lapp grew dissatisfied with the quality of the vessels available, he resolved to build his own. He considered moving into a boatyard in France or Italy but instead chose Poland, where he owns a utility company. Lapp knew that the Baltic Sea area had produced many skilled boatbuilders, and he recognized that the relatively low cost of labor in Poland would allow him to price boats attractively. So in 2000 he established a manufacturing operation in a shipyard in Gda´nsk, the birthplace of the Solidarity labor movement (see “Pole Star,” page 196), and hired his son, Nicolas Lapp, to manage it.

By 2003, Sunreef had built its first vessel, a 74-foot semicustom sailing cat called Che. The boat established the template for Sunreefs to follow: a broad beam (35 feet in this instance), a spacious salon, a large aft deck and flybridge, panoramic views, luxury fittings, and advanced technologies, including a touchscreen display in the helm that controls the boat’s lighting, climate, and electronics. (In Che, it even controls the placement of the dining room table, which slides from the edge of the room toward the center.)

Sunreef then launched Mission and Mister T, the first two of an extensive line of 62-foot sailing cats. By last December, the company had built 15 of these 62-footers and had another 10 on order, at prices beginning at about $1.5 million. The catamarans’ master and guest cabins typically occupy the hulls, in one of three configurations: Owner (with a large master cabin in one hull and two guest cabins in the other); Semi-owner (with two cabins in each hull, one of the four larger than the others); and Charter (with two cabins in each hull, all about the same size). An additional two cabins hold as many as four crew members. Sunreef offers several options for interior decor, and it will create custom interiors as well.

Argonauta V, Sunreef’s 10th 62-footer, is made from fiberglass and carbon fiber and configured in the Semi-owner design. The boat, which belongs to a Spanish architect and his family, is captained by Javier Fernandez, an even-tempered man in his mid-30s. Following Argonauta V’s launch in Poland, Fernandez and three crew members sailed her in the Mediterranean for a few months, then piloted her across the Atlantic for the winter charter season in the Caribbean. “For me, catamarans are magnificent,” the captain says. “They’re fast but safe. You can go close to the beach in them. And you can sail with not much of a wind, just 8 knots [9.2 mph]. With 8 knots in a monohull, you don’t move.” Argonauta V, he observes, “will accommodate eight people—or 10 good friends.”

This cat is an elegant vessel, with mahogany furniture, cream-colored Alcantara upholstery, and a wenge floor topped with an ecru covering. The 30-foot beam allows for very roomy social areas, though the cabins, because they are built into the hulls, are somewhat cramped. The catamaran’s extraordinary stability makes sleeping easy, however, and it also should prove a boon to those prone to mal de mer.

Until recently, Sunreef made only sailing yachts, but earlier this year the company launched both sailing and power versions of a new 67-foot cat. The spacious 67 Sunreef Power has a transatlantic range when propelled at 9 mph by twin Volvo Penta 370 hp diesel engines. With 870 hp engines, the vessel will reach 35 mph. Orders for the cats, which have starting prices of about $2.4 million for the sailing version and about $2.7 million for the motorized one, are backlogged through 2009. Sunreef also is working on a 102-foot-long, 40-foot-wide sailing cat—the first catamaran in the world to have a double deck—that will launch next year.

Sunreef’s boatyard has doubled in size over the past two years, and the company now is building a new yard that will open by 2010. This facility will be able to accommodate very large craft, a feature that Nicolas Lapp needs if he is going to achieve his goal of building cats of megayacht size. “We’ve designed a boat that’s 150 feet long,” Lapp says from his office in Gda´nsk. “We’ve designed a 200-footer. We’ll make larger yachts as long as our customers request them, and at the moment that demand is strong. We may even produce a few monohulls. But above all, our mission is to build catamarans that are safe, comfortable, and luxurious.” That combination seems especially appropriate for the free and easy pleasures of Anguilla and its Caribbean environs.