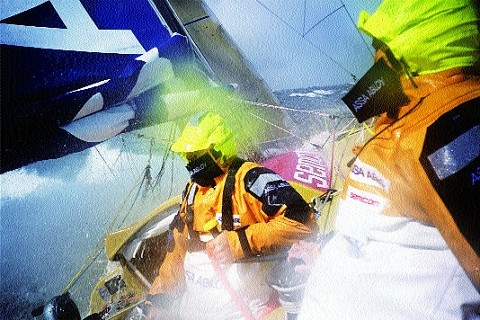 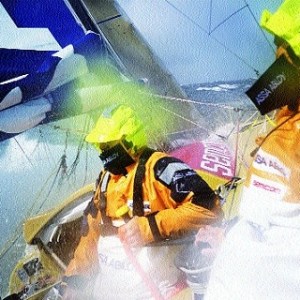 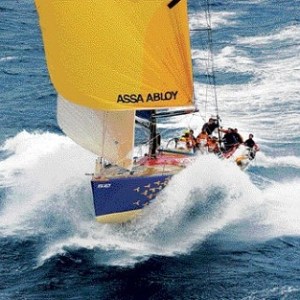 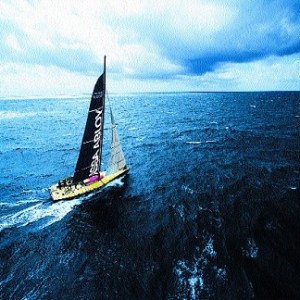 We’re somewhere between Miami and Baltimore, some 60 miles out on the Atlantic Ocean. The overcrowded deck of our boat—a Volvo 60, one of the world’s most sophisticated racing sailboats—is a dark and tense world, inhabited by dangerous winches, highly tensioned lines, and six men. Our job is to move the spinnaker, the forward sail, from starboard to port. If the spinnaker falls in the water, it could be shredded. If one of us falls in the water, the moonless night would make a rescue very difficult and dangerous.

There’s a bang. Somehow the mainsheet, the line controlling the mainsail, has become tangled around a winch. Jan Koekemoer, a 260-pound professional sailor and former pro rugby player from South Africa, reaches down to steady himself, and the winch’s lines ensnare his hand. “My finger!” he screams.

In the darkness and confusion, men curse as they work to free his hand and tame the tangled lines. “I’m okay, I’m okay,” Koekemoer yells, continuing to help with the jibe, one-handing a winch.

The boat becomes silent. I don’t know if the wetness under my bare feet is blood or water. Then Jim Stone, the skipper, gives the order: Get back down to your bunks. We head belowdecks unaware of how severe the injury is. Exhausted, we sleep anyway. The next morning, Koekemoer shows me a raw but intact finger. “It was close,” he says.

I am one of 12 men racing more than 1,000 miles along the U.S. East Coast on a 60-foot boat that’s as unforgiving as it is fast. I’m one of the rookies, experiencing what it’s like to compete in just one leg of the Volvo Ocean Race (formerly the Whitbread), the around-the-world sailboat competition that runs every four years.

Over 10 months, eight teams scream across 37,000 miles of sea, including the Southern Ocean, the most dangerous water on earth. The boats left Southampton, England, on September 23, 2001, and were scheduled to reach the finish on June 9 in Kiel, Germany. We’re on the Assa Abloy twin boat, a duplicate of the team’s race machine. Assa Abloy, a Swedish conglomerate that owns international lock companies and is the raceboat’s sponsor, has built the twin that I’m sailing on to test sails and give VIPs, such as Assa Abloy employees and clients, an onboard thrill.

A Volvo 60 is a Formula One car to a cruising sailboat’s PT Cruiser. The hull and deck are made of a foam and Kevlar sandwich, Kevlar because it’s light and can withstand impacts from icebergs. Unlike the displacement hulls of most sailboats, the hull of a Volvo boat is designed to plane along the top of the water like a powerboat. Our boat’s record speed is said to be 41 mph. Its mast is made of carbon fiber, which is strong but flexible—and bending without breaking is the essence of the Volvo Ocean Race.

Since the first Whitbread in 1973, four people have died on the water, all washed off the decks. Two others died in port, one a suicide, the other in a motorcycle accident. The race is a graveyard of broken masts, delaminated and leaking hulls, overturned boats, and crushed bones. There are no chase boats, and competitors are almost always beyond the reach of helicopters.

Despite the complexity of our Volvo 60, the boat’s interior is spartan. We spurn hydraulics in favor of a simpler, lighter solution: muscle. Our galley is a single-burner gas stove and a sink with only cold water. The head doesn’t have a seat, the bunks are netting and tube, and there are no cushions onboard. The only equipment allowed on the boat either helps it go faster or helps keep sailors alive. Luxury comes in the form of three hours of sleep and waking up to hot water in the thermos for a cup or two of instant coffee.

While our mission is to transport sails and guests to Baltimore, we’re also an unofficial entry in Leg 6 and are pushing hard with the eight-vessel race fleet up the coast, hoping to beat a raceboat or two. We—the rookies—are part of the crew and expected to work. Two things reassure us: a good weather forecast for a warm downwind run all the way, and a short leg. The longest, from Southampton, England, to Cape Town, South Africa, is nearly 8,500 miles, eight times longer than our current leg.

Our crew is equally divided between professional sailors and the Mod Squad, or the rookies. Most of the Mod Squadders are employees or guests of Assa Abloy. All but two of the crew—myself and Richie Kubala, an Assa employee who has never been on a sailboat—are experienced cruising sailors. Kubala does, however, live on a houseboat in Texas.

A day into the race, we consume life in four-hour portions. Somebody yells, and we unfurl ourselves from our bunks and scramble topside without delay. We’re being pressed into a unit by fear, work, ambition, and the desire to not screw up. Sleep is amazingly easy, considering that with the 24-hour grinding of the winches, we might as well be inside Aerosmith’s drum set.

There’s enough to do on the boat to keep six people busy most of the time. Topside, the sheets—the lines controlling the mainsail and the headsail—are constantly adjusted for optimal speed. This means a lot of grinding on the pumps, the hand-driven winches you see the big guys spinning on America’s Cup boats. As for the water collecting in the bilge, it might be from leaks in the ballasting system or the sweat we drop moving 200-pound sails and repacking spinnakers. The deck is a battleground of winches and lines, all as highly tensioned as the race crews out there somewhere ahead of us.

America’s Cup racing, by contrast, is a cruise in the lake. Races are scrubbed if it’s too windy. The racers return to port every day. There are no icebergs. Shore crews repair everything. The Volvo, however, is closer to what real sailing has always been about: exploration, speed, beauty, and danger.

Josh Alexander, second in command, knows all about danger—and seems to have his own aura of risk. He looks tough as stainless, a hard edge of shaved head and attitude with a glare that will not quit. Alexander has competed in four Sydney to Hobart Yacht Races, including the bad one in 1998 when the fleet sailed into a storm and six sailors were killed. He’s the kind of guy you want to watch your back and the kind you don’t want to let down.

Alexander celebrated his 26th birthday rounding Cape Horn while crewing on the raceboat during the Southern Ocean leg, which included several spinnaker-up 32-mph night runs (boat speed, not wind velocity), skirting icebergs as though they were slalom gates, praying and sailing blindly through the blackness save for the radar.

During one of those runs, Assa Abloy stumbled into a dangerous broach, sliding down a huge wave on its side with its sails on the water before righting itself and roaring away without damage, except for the psyches of the people who were washed around on the deck. “Anyone who races boats like ours in the Southern Ocean and says they have not been scared is either mad or stupid,” writes Neal McDonald, Assa Abloy skipper, via e-mail during one of the legs. “I don’t mind admitting it. I have been terrified on a number of occasions.”

For all the danger such racing can offer, it provides an equal degree of beauty. During high-speed night sailing, there is no moon and stars drip from the sky. Joe DeCarlo, a writer and a veteran sailor of Chesapeake Bay, points out Venus, Mars, Jupiter, and Saturn, rarely so visible from land. The sailing is fast, with the kite up hour after hour. There is little noise on our 10 pm–to–2 am shift, save for the wake and the murmur of men as close to peace as nature and circumstance allow. When all is right aboard a sailboat, all is damn near right in the world. We know it won’t last. It can’t. The fragility enhances the beauty.

Somewhere south of Cape Hatteras, N.C., the wind backs off. We light the 70-hp diesel, which the racers don’t have the luxury of doing. Still, they’re miles ahead of us, having caught a more favorable weather system. We bully our way forward at about 9 mph, escorted by the Gulf Stream. The air temperature calls for shorts and bare feet. Dolphins play in the bow wake, pilot whales surface, and a flying fish strikes the helmsman in the chest.

We skirt squalls, watch the waterspouts they produce, and take quick sailboat showers on deck when it rains. When we stop to transfer diesel fuel to the main tank, Alexander throws a knotted line off the stern and tells us to help ourselves to a swim. I’m first out, feeling spooked. I like seeing land when I’m swimming; we’re about 100 miles offshore. The skipper warns us not to stay in too long. Sharks, you know.

Slow going like this is frustrating for the real racers. If anything, light wind is more work. It requires more sail changing and trimming to adapt to the shifting wind, and more moving of thousands of pounds of sails down below to shift the weight after each tack and jibe.

By early evening of the third day we’re closing on the Chesapeake Bay Bridge-Tunnel, still under sail and with plenty of fuel. We make it through the night without incident. The three-day run from Miami takes four, thanks to that period of light wind. We’re tired, but it was a day at the beach compared to what the racers endure. During the first leg they were at sea more than a month—some for 38 days.

Soon I will be making my way home, thinking of the sailors who raced the very leg I have just completed. They’ve already sailed more than halfway around the world. They don’t get to go home to their families, although some get visits at ports. “The race itself is 10 months, and although we’re on dry land between legs for 40 percent of that period, there is no real downtime,” McDonald writes. “At the end of each leg, you are totally shattered, mentally and physically drained, but somehow you have to attend a leg debriefing, talk to the media, talk to the sponsors, and get yourself and the boat ready for the next leg. No other sport I can think of is so demanding for so long.”

When my wife and kids arrive at the dock, I want them to meet everybody. “This is Josh,” I say, introducing the Kiwi to my family. He bends down to greet my children. It’s not a glare now, this look of his. It’s a smile, a sailor’s hard smile. Like the sea, it’s a challenge, a greeting, a dare. It says, let’s see what you’ve got, mate.