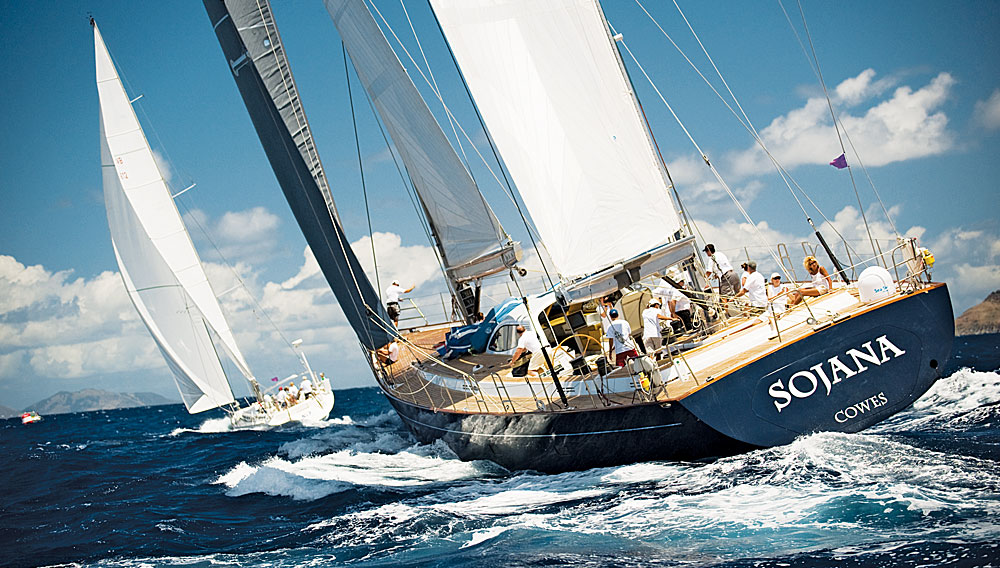 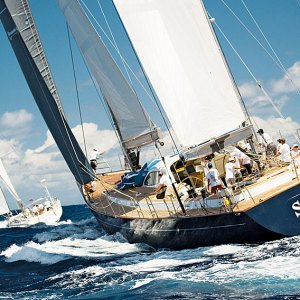 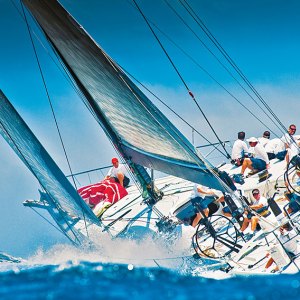 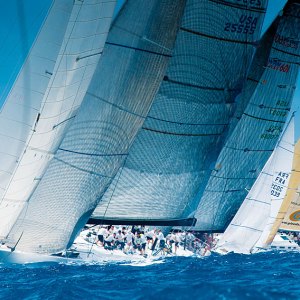 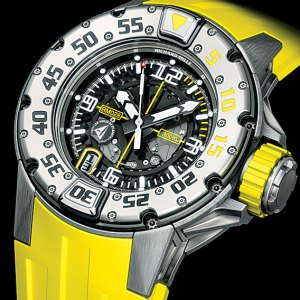 Skipper Peter Holmberg sprung catlike between the twin helms of Sojana, his boat shoes squeaking on the sailing yacht’s deck as he rushed back and forth with each tack and jibe. Gripping one of the wheels, he leaned over it and peered across the white-capped waters off the island of St. Barts. Holmberg, known in sailing circles for helming Switzerland’s Alinghi during its successful defense of its America’s Cup title in 2007, fixed his gaze on our rival Rambler, a sleek 90-foot racer owned and skippered by George David, former longtime chairman and CEO of United Technologies Corp.

Before directing Sojana’s next maneuver in the 23-plus-mph trade winds that prevailed throughout the race, Holmberg admonished me for giggling with another passenger as we sat with our legs hanging over the hull, performing our duties as ballast or, in the sailors’ words, “rail meat.” Though this was springtime in the Caribbean, Holmberg was making it clear to me and everyone else on board that this was no vacation. Like the rest of the sailors racing in the 2010 Les Voiles de Saint Barth, he was here to win.

Les Voiles elbowed its way into the spring regatta calendar last April, and in its inaugural running it drew 23 boats in five classes: Super/Maxi Yacht, Classic, Racing, Racing Cruising, and Racing Multi-Hull. Sojana and Rambler were two of the four boats that competed in the Super/Maxi Yacht category. The regatta’s second edition takes place April 4 through 9, when race officials hope to host at least 50 yachts across the five categories.

“With so many sailing events in the Caribbean, we needed to fill a niche,” explains Annelisa Gee, co-organizer of Les Voiles de Saint Barth. “Our vision for this regatta was attracting the top boats and the most competitive people in sailing from around the world to sail against each other. We wanted to raise the bar and make it the one event they couldn’t miss because of the competition and the great ambience of the island.”

Indeed the regatta offers more than just competition. The Quai Général de Gaulle dock in Gustavia, the capital of St. Barts, serves as the “race village,” where every night after the races various activities take place, including restaurant tastings and musical performances. The week begins with an opening ceremony and concludes with an awards presentation. During the races, spectators can enjoy some of the best views of the competition from land, thanks to the island’s topography, which includes numerous easily accessible summits along the coast. “By day, you can look out from any vantage point on the island and see different size sails crisscrossing on the horizon,” says Gee. “And in the evening, you can rub elbows in a relaxed, convivial setting with some of world’s most accomplished sailors and VIP personalities.”

The race organizers consider the weather and water conditions before each day of racing and select one of 40 courses—some as long as 35 miles—based on which route will provide the optimal sailing conditions. “The island is small enough so you can race around it, and there are lots of little islands to use as marks,” says Gee. “We can race all sides. One side may be calm, while the other has 3-meter seas. The courses present a challenge to the skippers and also to navigators and tacticians who have to choose from different options for getting from point A to point B.”

At last year’s regatta, David, the owner and skipper of Rambler, said he appreciated the chance to test his sailing skills. “The courses are complicated and really unusual because of the island topography,” explained David, who has been sailing for 35 years. “The challenge is that you’re going everywhere; there’s every point of sail you can imagine. With a boat the size of Rambler, sail changes are not trivial, so you have to be well ahead of the game. At prestart, you sit at the back of the boat trying to figure out the wind angles 15 miles up the course. That’s a lot of fun.”

The challenging nature of the racing was evident on board Sojana, where Holmberg constantly consulted with his crew during our duel with Rambler. “Are you happy with that?” he asked about each proposed plan, confirming a consensus with his navigator and others before making the final call on any move. The course for this fourth and final day of racing charted an 18-mile circumnavigation of the island, around its steep cliffs and jagged outcroppings.

Sojana’s owner is Peter Harrison, chairman and trustee of an eponymous charitable foundation that supports sports and education programs for underprivileged and special-needs children. Harrison, who also is a vice president of the Chelsea Football Club, is a ruddy-faced British tycoon who made his fortune with a company specializing in computer networking and Internet integration. He started sailing in 1972 and wryly describes his skill level as “not particularly good.” Nevertheless, he established the two-yacht GBR Challenge team, which from 2001 to 2003 vied to compete for the 2003 America’s Cup in New Zealand. (Alinghi ultimately earned the right to challenge Team New Zealand when it won the 2003 Louis Vuitton Cup; GBR Challenge finished sixth. Alinghi went on to win that year’s America’s Cup.)

Harrison commissioned racing-boat designer Bruce Farr, based in Annapolis, Md., to craft Sojana in 1999, requesting a 115-foot cruising sloop with a high-performance hull and a gentlemen’s club atmosphere down below. Sojana’s hull is made of the same honeycombed carbon-fiber material used to build America’s Cup racers, and the furniture and fixtures below deck were custom-made to be extremely lightweight. Launched in September 2003, Sojana has logged more than 91,000 miles and regularly competes on the Caribbean and European regatta circuits.

But despite her all-star crew—which included, in addition to Holmberg, Frenchmen Loïck Peyron, Lionel Péan, and Jacques Vincent—and her victory in the final day of racing, the behemoth Sojana was no match for the nimble Rambler, which won the first three races in the swells off St. Barts. “Rambler is a grand prix–class racer, and this is a superyacht with furniture below. It’s like racing a leopard against a cheetah,” quipped Holmberg immediately following the final race.

David chuckled when told of Holmberg’s remark. “That may be true,” he said. “Rambler would lose every competition on creature comfort. Down below is for sails and sleep.”

David acquired Rambler in 2007 and continually makes speed-enhancing modifications; shortly after purchasing the yacht, he added a foot to the length of the keel and a ton to the weight of the bulb attached to the keel. “We weigh 21 tons dry, and we carry six tons of water ballast,” David said. Even with all that tonnage, Rambler still is a lightweight compared with Sojana, whose heft David estimated at about 80 tons. “You can appreciate how light and lively Rambler is and why the boat is so much fun to sail. It’s not a good place for a glass of wine, but it’s a rocket in the water.”

Two deceptively speedy vessels competed in a tightly contested race on the final day of last year’s Les Voiles de Saint Barth. In the Classic category, White Wings, sailed by an all-women crew, prevailed by only four seconds over Wild Horses. Both are 76-foot boats made by the W-Class Yacht Company, and both are owned by Donald Tofias of Newport, R.I., proprietor of that company, which also builds 37- and 46-foot versions of these retro-style vessels. They resemble the J-Class yachts of the 1930s, but they are built for speed with state-of-the-art technology. “My boats are high-tech and modern, but they just look like old boats,” said Tofias.

Before the awards-presentation ceremony, sailors and spectators crowded the bar and shared their racing stories at the Quai Général de Gaulle. In the tent where the bar was set up, admirers paid their compliments to famed fashion photographer and St. Barts resident Patrick Demarchelier, who competed in the Racing group on Puffy, his Swan 45. An array of superyachts filled the slips adjacent to the Quai Général de Gaulle and not far from the Rue de la République, which is lined with boutiques brandishing the logos of Hermès, Louis Vuitton, and other fashion powerhouses. Unlike much of the rest of the Caribbean, on St. Barts, Champagne is more likely to flow than rum.

The winning crews from each class paraded onto the stage to accept their applause from the crowd, the members of which all seemed to know each other. The prizes for winners included a week’s stay in an island villa, a crystal trophy, and a limited-edition RM 028 diver watch (see “Race Time”) from event sponsor Richard Mille. (The watchmaker will present a different timepiece to this year’s victor.) As they clapped their hands for the 2010 victors, the runners-up no doubt were thinking about this year’s regatta and the different tacks they might take.

High-performance autos may be Richard Mille’s most consuming passion—besides watches—but his brand’s sponsorship of the Les Voiles de Saint Barth shows that his zeal for speed and sport transcends road and track. The sponsorship coincided with the release of a special Richard Mille Les Voiles de St. Barth RM 028 (www.richard-mille.com), a 47 mm skeletonized diver watch that can withstand depths to 300 meters, or about 984 feet. Mille calls the timepiece the company’s “first watch that is at home on, as well as below, the waters of St. Barth.”

The 100-piece limited edition bears the Les Voiles de Saint Barth logo and features a bright yellow rubber strap and crown protector, and some of the numbers on the bezel are yellow. The watch owes its water-pressure resistance to a three-part case construction with 22 torque screws and fully integrated lugs. The case contains an automatic movement that features Mille’s exclusive rotor system with variable geometry, which allows the wearer to fine-tune the watch’s winding to match his activity level.

While Rambler’s owner George David has no plans to test the watch’s water-depth rating, he has put it through the paces aboard during ocean races. “This watch is intended to be worn in and around the water,” he said at last year’s Les Voiles de Saint Barth. “I like that you can really see the dial at night. It has great luminescence.”

John Simonian, CEO of Richard Mille in the Americas, sees a parallel between sailing and all of his company’s watches. “Richard always loves to mix contemporary with heritage, as you see in his very modern watches that may incorporate a tourbillon, which was created centuries ago,” he says. “Sailing also has a rich heritage, and it only gets more intriguing as new technologies are adopted.”