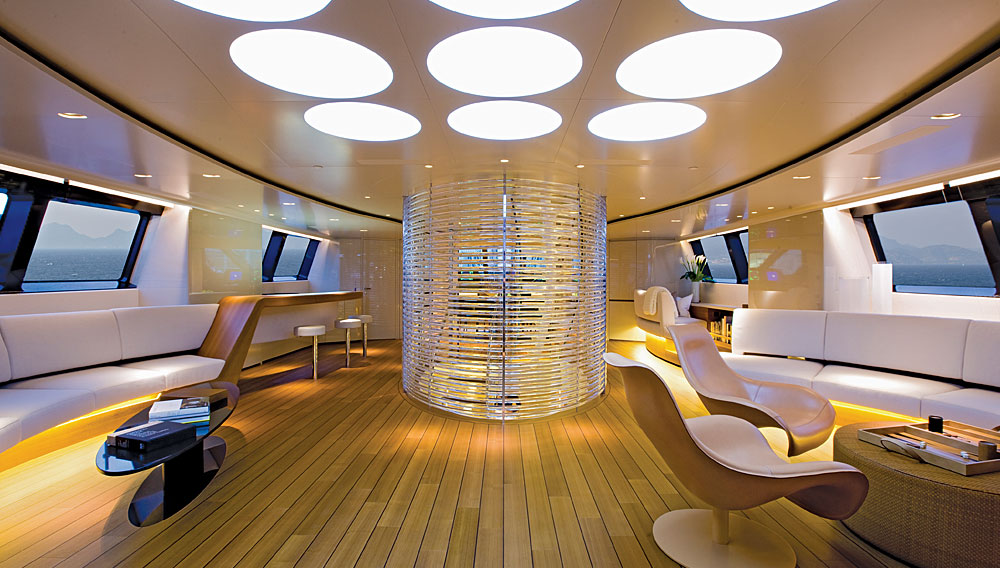 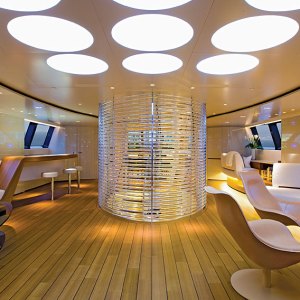 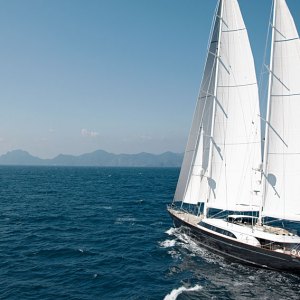 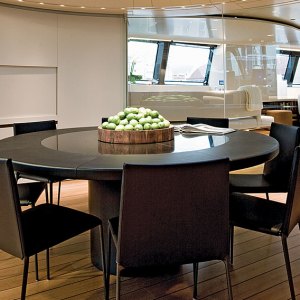 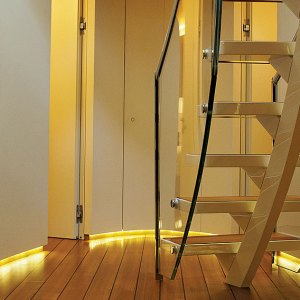 The portrait of a perfect charter yacht varies with every passenger’s preferences. Some charter clients care most about the quality—and the equality—of the staterooms. Others might be focused on the yacht’s outdoor spaces and water toys. For some, a first-rate crew is of foremost concern, while others place a premium on fuel efficiency and range. And then there are those who want to ensure that their yacht makes a statement when it docks in the most popular ports of call in the Caribbean and Mediterranean. Perini Navi’s new Panthalassa serves each of these many masters.

Launched late last year, the 184-foot sailing yacht is hull number 8 of the Viareggio, Italy–based yard’s 56-meter line. Panthalassa (“all the seas” in Greek) stands out from its predecessors with a modified aluminum superstructure codesigned by naval architect Ron Holland and a striking interior by noted architectural firm Foster + Partners of London.

As many as 12 passengers can cruise comfortably aboard Panthalassa, which forgoes a master suite in favor of six spacious staterooms with en suite baths. The yacht also features ample outdoor areas and water-sports gear, and a crew of 10 to serve passengers as they ply the Caribbean this winter.

Bright Idea | The owners of Panthalassa enlisted Foster + Partners to conceive a design for the yacht with a seamless transition from indoors to outdoors. Designer Todd Hutton thus created wide-open public areas such as the main salon, where windows allow in abundant natural light. Skylights also brighten things up, including the example that sits above a casual eating area and another above the main dining room that doubles as an outdoor table on the top deck. LED lighting around the skylights amplifies the effect.

Also enhancing the bright atmosphere aboard Pan­thalassa are the acrylic rods that surround a central oval staircase, which links the yacht’s main and lower decks. The rods reflect daylight back into the main salon and into the living areas below it. Hutton designed the yacht’s library so that the seating looks out to the water, rather than inward as is typical in such a space, to increase the sense of openness on Panthalassa.

The designer’s use of a natural, neutral color palette paired with materials such as teak, saddle leather, and granite makes for an inviting and relaxing vibe throughout the yacht. But Panthalassa can take care of business when necessary: The sailboat offers Wi-Fi, videoconferencing facilities, VSAT, GSM, and several other state-of-the-art communications options. The formal dining room doubles as a conference room and, once the workday is done, a cinema with a Kaleidescape video-on-demand entertainment system.

State of Equality | Panthalassa’s six staterooms are nearly identical in size. Four of the rooms have a king-size bed and a Pullman bed, while the remaining two rooms each offer a pair of twin beds, which convert to kings. All of the accommodations include private bathrooms with roomy showers, a design component that reflects Panthalassa’s purpose: The yacht was built with chartering in mind, and all six cabins were created equally to preempt potential arguments over which passengers would get which suite.

Inside the staterooms, leather wall paneling complements light wood floors cushioned by silk rugs. Curvy custom furnishings are cozy and inviting while keeping the cabins sleek, open, and clutter-free—an ambience that carries over to the spacious and stylish en suite bathrooms.

In addition to its six staterooms, Panthalassa accommodates the 10 crew members in two double cabins, two twin-bunked cabins, and one triple.

Top to Bottom | Panthalassa’s large sail plan and svelte profile help the yacht reach a top speed of 16.5 knots under sail—an impressive figure given the vessel’s 497-ton volume. Two Caterpillar 32 V12 engines serve as alternative propulsion, powering Panthalassa to a cruising speed of 12 knots and a top speed of 14 knots.

Panthalassa’s deck spaces are populated by dining tables, including the dual-purpose skylight that seats 12. The yacht also has a plethora of sun pads, as well as a swim platform and a barbecue grill.

For children (and like-minded adults), Panthalassa offers floating waterslides and a custom on-deck inflatable swimming pool. Underwater enthusiasts are catered to by a dive instructor (an optional crew member) and a dive locker with six full sets of scuba gear. The yacht also offers four SeaBobs—personal watercraft that can dive deep below the ocean’s surface—as well as a three-seat WaveRunner, a Jet Ski, boards for kitesurfing, Windsurfers, water skis, wakeboards, two custom 20-foot Pascoe RIBs, and an 18-foot expedition RIB.