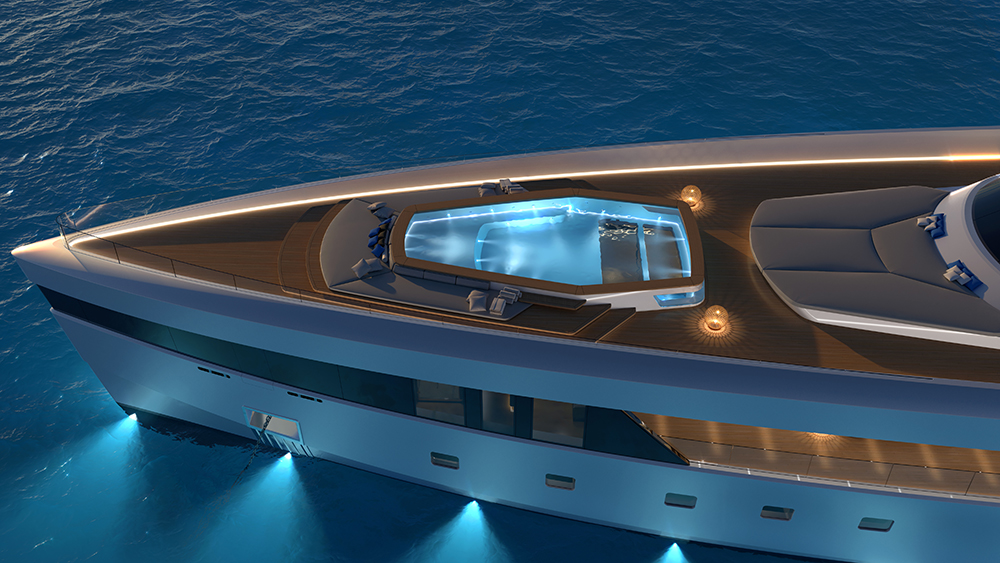 The A Group has assembled an A-Team for its newest superyacht concept. The Monaco-based studio, established in 1985 by Oceanco cofounder Richard Hein, has joined forces with up-and-coming yacht designer Thibaud Le Merdy to create a revolutionary 272-footer known as Project Comète.

Thibaud first penned Comète in 2017, the same year he was named BOAT International‘s Young Designer of the Year. And now, with the help of yachting director Matt Pegrum, Thibaud has been able to further refine his vision and bring his dream machine to fruition.

In essence, Comète infuses Thibaud’s fresh blood and new ideas with The A Group’s extensive construction expertise. The vessel features dynamic and elegant lines, as well as a superstructure that blends effortlessly with the hull. Its generous proportions result in an expansive 1,800GT interior with living quarters that flow seamlessly to the exterior.

“Comète could be described as the first project that brings the outside in and the inside out due to her revolutionary arrangement,” a spokesperson for The A Group told Robb Report via email.

The layout offers accommodation for 12 guests, along with 22 crew. The owner’s suite comes with its own private terrace that spans just shy of 1,300 square feet and offers sprawling sea views. Elsewhere, the vessel features a sheltered exterior saloon forward that covers roughly 2,400 square feet, a spa that overlooks the bow and two jacuzzis for good measure. The real pièce de résistance, however, is the striking glass-bottom pool that steals the show on the upper deck.

The vessel’s living quarters flow seamlessly to the exterior.  Mirage-CG

“This design is for us the result of the perfect balance between spaces open to the surrounding nature and refined, clean forms,” the studio adds.

Naturally, Project Comète also packs toys aplenty. The sizable garage can store two 33-foot tenders and one 23-foot crew tender, along with no less than eight Jet Skis. As for propulsion, the vessel will have a top speed of 16 knots and a cruising speed of 12 knots.

Check out more photos of the vessel below: